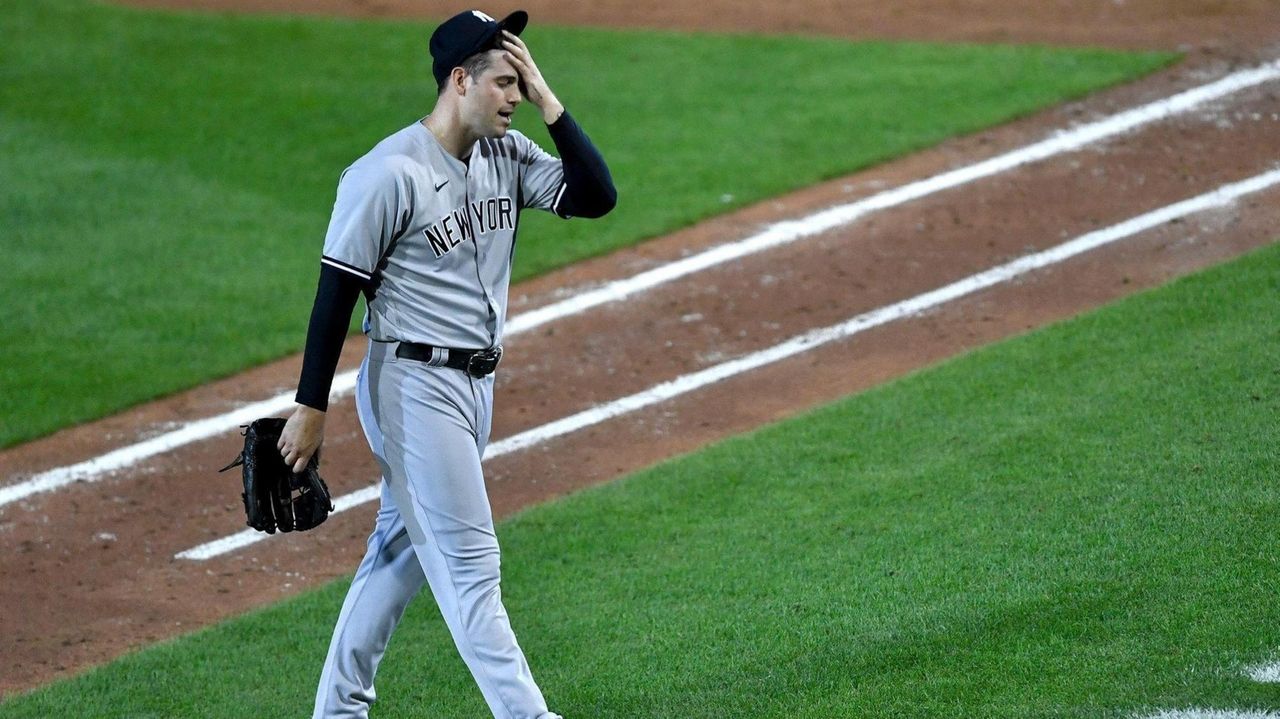 Toronto scored 10 runs in the sixth off Chad Green and Adam Ottavino before the Yankees could record the second out of the inning, en route to a 12-7 loss to the Blue Jays at Sahlen Field.  Newsday's Yankees beat reporter Erik Boland has the recap. Credit: Newsday / Erik Boland

BUFFALO — The 2020 Yankees on Sept. 6 after losing three of four in Baltimore: We’ve hit rock bottom.

After back-to-back homers by Luke Voit and Aaron Hicks in the first inning, a solo shot by Miguel Andujar in the fourth and a two-run double by Clint Frazier in the fifth  helped them build a four-run lead, it came apart in a hailstorm of shoddy defense and shoddier pitching in the bottom of the sixth en route to a 12-7 loss to the Blue Jays at Sahlen Field.

Toronto scored 10 runs in the sixth off Chad Green and Adam Ottavino before the Yankees could record the second out of the inning, helped by a two-run single by Vladimir Guerrero Jr., an RBI single by Lourdes Gurriel Jr., a two-run single by Travis Shaw and a grand slam by Danny Jansen. The Yankees contributed four walks and a run-scoring error by Luke Voit.

Guerrero even recorded the first stolen base of his career in the inning.

“It’s always tough when you feel like you’re the reason you lost the game,” said Ottavino, who pitched to six batters in the sixth. Each one not only reached base but scored before he left the game.

The Yankees (21-20) fell to 5-14 since their 16-6 start. They hold the eighth and final American League playoff spot. For the optimistic, they trail the Blue Jays (23-18) by only two games for second place in the AL East. For the pessimistic, they lead the ninth-place Orioles by 1 1⁄2 games and are two games ahead of the Mariners and Tigers.

“I think we’re frustrated, I think guys are off and it’s understandable,” Aaron Boone said Sunday in Baltimore.

“I think it’s the same,” Green said. “Guys are just frustrated, especially me and Otto. That’s something that can’t happen that inning.”

The Yankees entered the sixth with a 6-2 lead and Green, one of their key bullpen arms, on the mound. By inning’s end, Green, Ottavino and Luis Cessa had thrown a combined 67 pitches in a 43-minute half-inning as Toronto sent 13 to the plate.

“I’ve been trying to figure that out ever since I came out of the game,” Ottavino said. “I had zero swing-and-misses. A lot of good pitches taken. When I did throw it over the middle, they hit it really hard. Obviously a recipe for disaster.”

Though there seemed to be some issues for Yankees pitchers in terms of seeing catcher Kyle Higashioka’s signs in this minor league park that has been converted to the Blue Jays’ 2020 home, ultimately no Yankees pitcher, or Higashioka, used that as an alibi.

“Once we get a lead in the sixth, a four-run lead, we expect to win that game,” Green said. “In the past we have won those games.”

But beginning with Game 2 of a doubleheader against the Braves on Aug. 26 and continuing in the Mets series that followed, that has been a problem of late, with the Yankees’ best relievers repeatedly blowing late-inning leads.

As Jansen’s first career grand slam landed beyond the leftfield wall, the Blue Jays erupted from their dugout as if they’d won the division. At the same time, the top step of the Yankees’ dugout wasn’t nearly as crowded as it had been when the inning began.

“Nothing sucks more than that when it happens,” Higashioka said of being the victim of a 10-spot. “You have to try and figure something out and stop the bleeding, and unfortunately we didn’t seem to do that until they cleared the bases, and by then it was too late.”