Gary Sanchez of the Yankees celebrates his fourth-inning home run against the Blue Jays with teammate Gio Urshela at Yankee Stadium on Saturday. Credit: Jim McIsaac

Corey Kluber wasn’t around long enough to qualify for a win. The breakout from the Yankees’ offense didn’t occur.

Two days after laying an egg in their season opener, the Yankees, led by Gary Sanchez’s second homer in two games, a critical two-out, two-run single by Jay Bruce and some overall outstanding bullpen work, rebounded with a 5-3 victory over the Blue Jays at the Stadium.

"As I say, with our team, with individuals, this is the time of the year where you want guys . . . you want to get those ‘firsts’ out of the way so you can just kind of settle in and get into the grind of the season," manager Aaron Boone said after his club’s first win of 2021, which included a four-out save by Chad Green. "Today was a really good, hard-fought team victory where a lot of guys played a part in it." 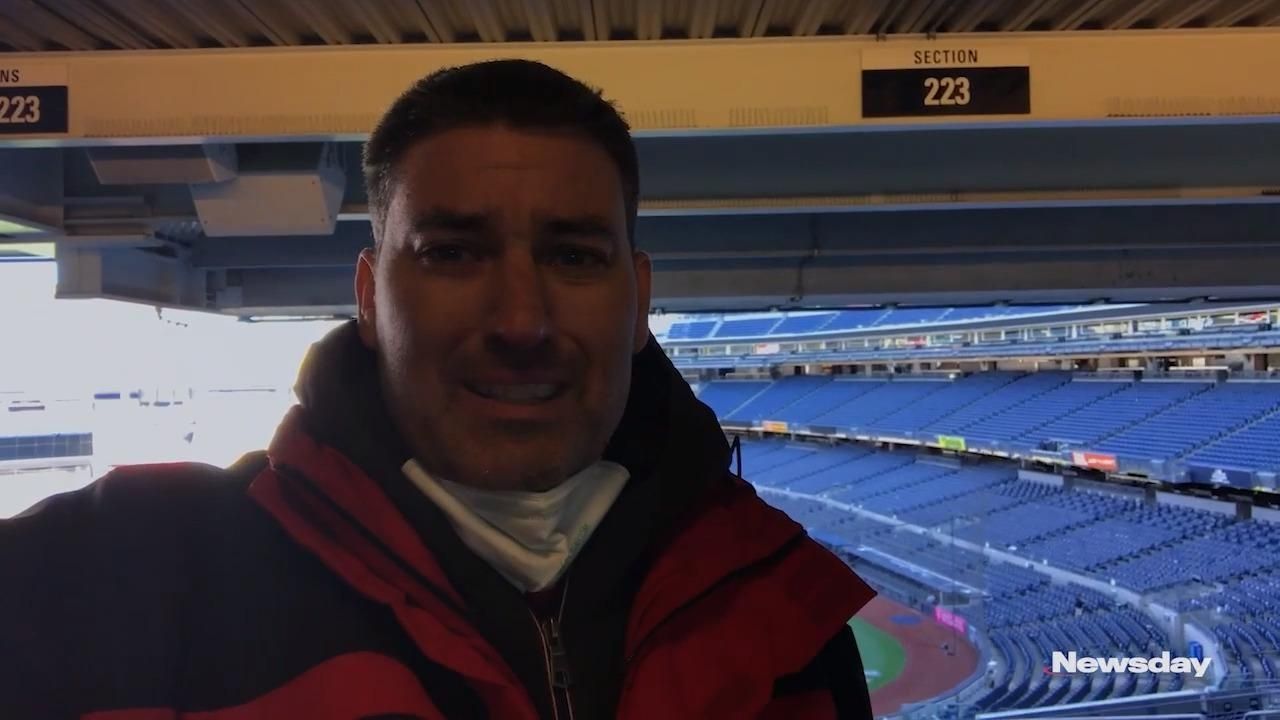 Yankees' bullpen gets it done in win over Blue Jays Corey Kluber left his Yankees debut in the fourth inning, and the Yankees' bullpen — while a bit erratic at times — was able to close out the 5-3 win over the Blue Jays on Saturday, April 3, 2021, at Yankee Stadium. Newsday's Erik Boland has morer, Credit: Newsday / Erik Boland

Kluber, making his Yankees debut after pitching all of one inning before a shoulder injury ended his 2020 season with the Rangers, was among those, allowing two runs (one earned), five hits and three walks in four innings-plus. He struck out five and induced two double-play balls in the first two innings.

The Yankees, who were 0-for-9 with runners in scoring position and stranded 10 in Thursday’s 3-2, 10-inning loss to Toronto, had 11 hits and six walks Saturday. They stranded 12 runners but went 4-for-10 with RISP.

At the point that Bruce came to the plate with the bases loaded and two outs in the sixth, the Yankees had 10 hits, five walks and only three runs scored. Bruce fell behind lefthander Tim Mayza 1-and-2, but two pitches later, he celebrated his 34th birthday with a looper into shallow leftfield to drive in two runs for a 5-2 lead.

"It wasn’t the prettiest or hardest hit of all time," Bruce said, "but I’ll take every one I can get. It was timely, and that’s even more important."

The bullpen, though rickety at times, mostly held what is expected to be a potent Toronto lineup in check the rest of the way. Lefty Lucas Luetge, a non-roster invitee whose brilliance in spring training forced the Yankees to put him on the roster, made his first appearance in a big-league game since April 25, 2015. Hurt by a bloop single and two wild pitches, he allowed a run in the seventh to make it 5-3.

In the eighth, Darren O’Day allowed bloop singles by Bo Bichette and Teoscar Hernandez and left a two-on, two-out jam for Green, who struck out Rowdy Tellez swinging at a 96-mph fastball to end the threat. Green then pitched a perfect ninth for his fifth career save.

Green closed as Aroldis Chapman served the second of his two-game suspension incurred last year for throwing near the head of the Rays’ Mike Brosseau last September.

Did Green feel an adrenaline surge when he entered in the eighth, spurred on by actual fans in the seats?

"For sure," said Green, who had the vast majority of those fans on their feet before his strike three pitch to Tellez. "I think that’s just a natural reaction. And it’s nice that fans are in the stands, so you get a little cheer and stuff like that [running from the bullpen]. Adrenaline is definitely starting to come back. Obviously different than how it was last year, having to kind of create your own adrenaline. Definitely nice to have the fans back in the stands and get that extra boost."

Gio Urshela started a second-inning rally with a two-out single off Ross Stripling and went to third on Clint Frazier’s double into the leftfield corner. DJ LeMahieu topped a slow grounder to third and first baseman Vladimir Guerrero Jr. came off the bag while stretching for Cavan Biggio’s throw, resulting in an infield single and a 1-0 lead.

The Blue Jays tied it in the third when Sanchez, with runners on first and third, threw a one-hopper into centerfield while attempting a strike-’em-out-throw-’em out double play on Marcus Semien’s stolen-base attempt. Gleyber Torres was unable to get a glove on the throw and Danny Jansen, who had retreated to third, scored the tying run.

Sanchez atoned for his error in the fourth, roping Stripling’s hanging slider just over the leftfield wall to give the Yankees a 2-1 lead. They extended the lead later in the inning on Aaron Hicks’ bases-loaded infield single, but Giancarlo Stanton fouled out and Torres struck out to strand three runners.

Semien’s homer to leftfield drew Toronto within 3-2 in the fifth.

Kluber's performance worth smiling about, even if he won'tKluber doesn't show much emotion, but that doesn't mean he didn't enjoy returning to the mound. German appreciative of second chance, excited about Sunday's start''For me, I'm thankful for the opportunity and at the same time, I want to show that when you get a second chance, you want to do things right,'' the righthander said. Yankees notes: Injury timelines, Boone on ASG"Hopefully, if things go smoothly, we're looking at kind of a four-to-six-week scenario [for his return],'' Aaron Boone said of Luke Voit, who had knee surgery last Monday.