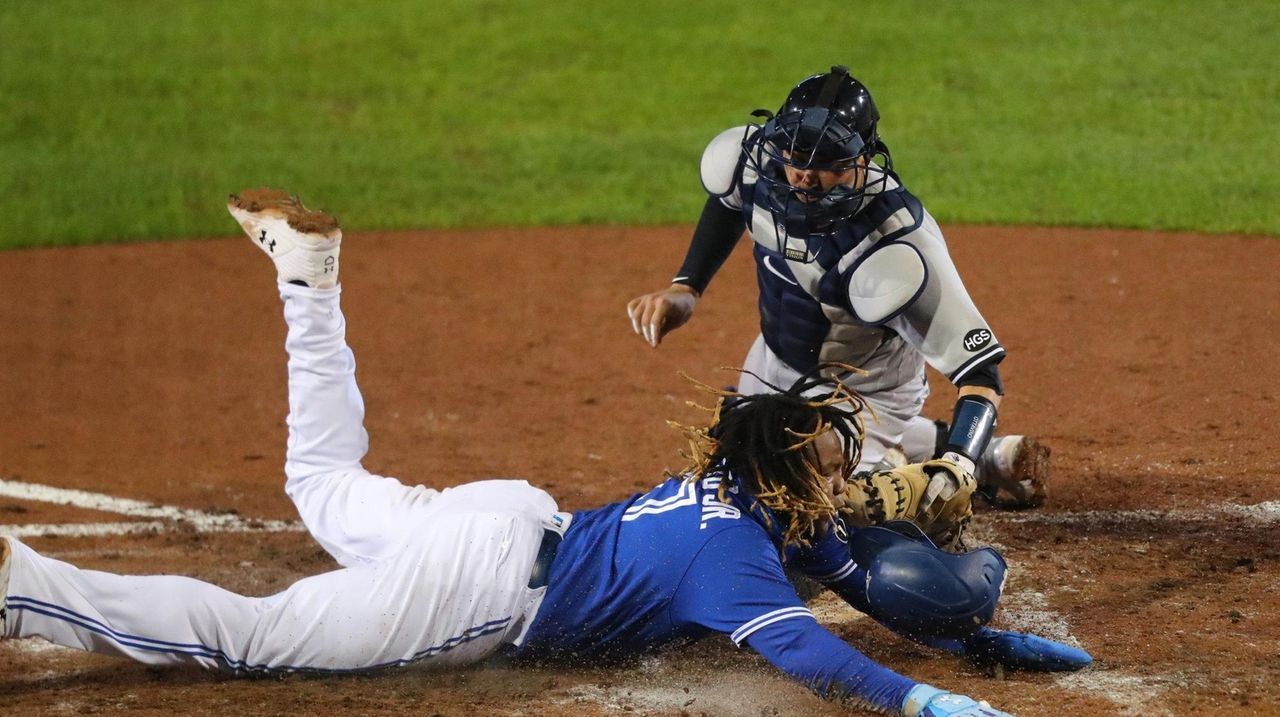 The Yankees will most likely start the playoffs on the road where they had a 11-18 record this season, says Newsday’s Erik Boland. Credit: Newsday / Erik Boland

BUFFALO – Luke Voit delivered one of the lines of the season after the Yankees played perhaps their worst game of 2020 Wednesday night.

"That was not Yankee baseball at all," Voit said after a 14-1 loss in which the Yankees committed four errors and were outhit, 16-4. "It was almost like we were the Bad News Bears."

The Yankees didn’t come close to reaching that level of baseball ineptitude Thursday night, but they were a long way from "turning the page," a frequently heard remark from the visitors late Wednesday night.

Instead, it was another quiet performance at the plate as the Yankees were handcuffed by Hyun-Jin Ryu over seven scoreless innings of a 4-1 loss to the Blue Jays at Sahlen Field, a venue they will be more than happy never to see again.

The Yankees (32-25) lost three of four here to the Blue Jays (30-27), who despite being forced to play all of their "home" games at the home of the Triple-A Buffalo Bisons, officially clinched an AL playoff spot with the victory.

The Yankees, who have lost four of five after a 10-game winning streak, entered the night in the fifth playoff spot – their chances of hosting next week’s best-of-three wild-card round already remote – but their potential opponent very much up in the air (the White Sox, Twins and Cleveland are all possibilities).

"If we're playing at our best, I don't give a crap where it is," said Aaron Boone, whose team is 21-7 at home compared with 11-18 on the road. It doesn’t matter where it is once we get rolling."

Ryu, who brought a 8.80 ERA in three career starts vs. the Yankees into the night, a resume that includes a start against them Sept. 7 when he allowed five runs and six hits over five innings, allowed five hits and two walks with four strikeouts in his brilliant outing Thursday that improved him to 5-2 with a 2.69 ERA this season.

Jordan Montgomery, who came in 2-2 with a 5.12 ERA but the Yankees feeling the lefthander had thrown the ball better than his ERA suggested, was solid, allowing three runs (Adam Ottavino allowed an inherited runner to score) and six hits in 5 1/3 innings. Montgomery, not the issue on this night as his fastball and changeup were especially sharp, struck out eight and did not walk a batter. The Yankees, one night after going 1-for-7 with RISP and stranding eight, went 1-for-7 with RISP Thursday night and stranded 11.

"We have to get rolling again (offensively), obviously, if we want to get to where we want to go," Boone said.

Thrilled to see anyone but Ryu in the game, the Yankees scored in the eighth against righty Anthony Bass and came within inches of tying things up, or even taking the lead. Aaron Hicks and Giancarlo Stanton walked with one out and saw the lead runner score on a two-out infield single by Gio Urshela, which made it 4-1. Clint Frazier walked to load the bases and righthander Rafael Dolis came on to face Gary Sanchez, pinch hitting for Kyle Higashioka. Sanchez, in a season-long slump that has pushed Higashioka more into the picture for playing time with the playoffs approaching, put a charge into a 1-and-2 pitch but came up just short as cenerfielder Randal Grichuk made a leaping catch at the wall in left-center.

The dugout initially thought Sanchez had hit his second pinch grand slam of the season – his first came Aug. 30 vs. the Mets – but the ball died in the swirling winds.

"Off the bat I thought he did [hit it out]," said Higashioka, on the dugout’s top step, along with most of his teammates, on Sanchez’s drive. "Then we got pretty sad after that."