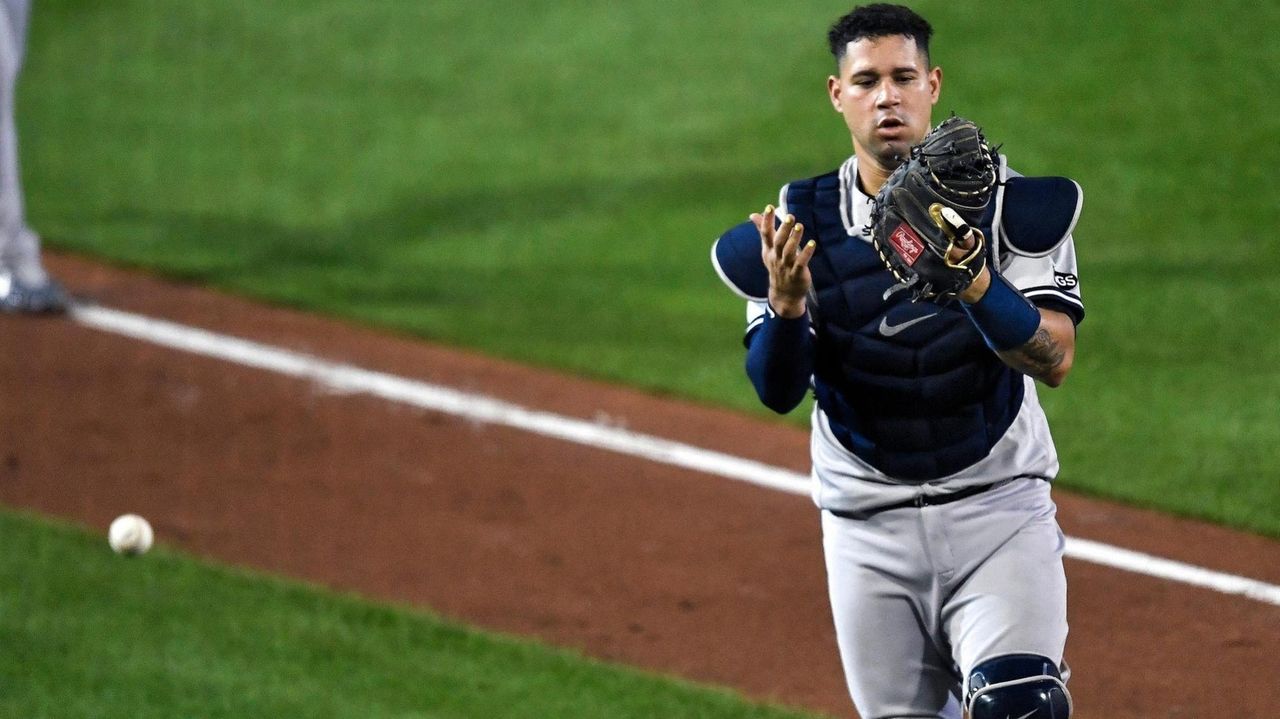 BUFFALO — Brian Cashman acknowledged it being something he does rarely and isn’t even sure of its overall effectiveness.

But with his team in a spiral that has shown few signs of abating, the Yankees general manager chose late Tuesday afternoon to address the club.

And Cashman was the first to point out regarding any happy talk at the moment: “Talk is cheap and all that matters is the performance.”

The Yankees’ overall performance, once again, was mostly dreadful.

Despite one of the best outings of J.A. Happ’s career with the Yankees, the offense couldn’t get much going in a sleepy 2-1 loss to the Blue Jays at Sahlen Field.

The Yankees (21-21), now in a 5-15 skid, which includes a five-game losing streak that has dropped them three games behind the Blue Jays (24-18) for second place in the AL East and 6 1/2 games behind the first-place Rays, looked no better at the plate, stranding nine through the first five innings and 10 overall.

“I almost feel like it’s embarrassing for us right now,” Luke Voit said of the .500 record coming after a 16-6 start to the season. “I feel teams aren’t scared of us right now and that’s a sad thing. We’re the New York Yankees…We have 18 games left. We need to figure this out.”

Of Cashman’s message, players backed up what the GM said of it before the game: it was primarily positive.

Still, Voit said of Cashman: “He means business. He knows we need to play better. It wasn’t a panic button; more just go out and be you.”

But what the Yankees currently are is a .500 team, one desperately trying to hold off clubs such as the Orioles, Tigers and Mariners for the last spot in the expanded playoffs.

“I know we’re better than that, but we have not played to our capabilities and the last couple of weeks have been rough to get us to that point,” Aaron Boone said of being .500. “We still have time to turn this thing around and confident we will, but we’re .500 right now, that’s the reality of the situation. The other reality is it’s there for the taking for us. We don’t need anyone’s help [to make the postseason]. We need to play well, and the season will take care of itself.”

Happ, 1-1 with a 4.68 ERA coming in, did his part Tuesday, allowing two runs, four hits and two walks over 6 1/3 innings. The 37-year-old, who struck out 10, made one big mistake: Jonathan Davis’ two-run homer in the second that made it 2-0, which was enough to sink the Yankees, who went 0-for-7 with RISP. They loaded the bases with none out in the fifth against Toronto righty Shun Yamaguchi but managed just one run on Mike Tauchman’s sacrifice fly.

“If we had the answer, we would have figured it out already,” DJ LeMahieu said of the offensive issues. “This team’s too good to hold down for too long. We’re too good a team and we all know it.”

Blue Jays starter Taijuan Walker had almost no command — walking five over four innings in which he threw 88 pitches (43 strikes) — but went unscored on as the Yankees stranded seven in that time. The Yankees had five hits — two by Miguel Andujar — compared to four for Toronto.

As players said, Cashman’s pregame meeting was not of the proverbial strip-the-paint-from-the-walls variety.

“Just to remind them first and foremost that I believe in them,” Cashman said. “I put this club together with my staff and everybody in that room is here for a reason.”

The meeting was held a day after Monday’s embarrassing 12-7 loss to the Blue Jays, a game in which Toronto hung a 10-spot on them in the sixth inning.

Lennon: Cashman's words can't fix what's wrong with YanksThese Yankees were built to play in the World Series, at the very least, and before Tuesday night's game against the Blue Jays, they were barely holding off the Orioles, Tigers and Mariners for the eighth seed in the American League.

The Saquon Barkley Week 1 watch is on
As deadline approaches, Scott wants depth for Mets' rotation
How Giants' Joe Judge will tackle the vaccination issue
Giants know they'll go as Daniel Jones goes in make-or-break year
Hope is high that new coach Saleh can reverse Jets' fortunes
Mets maintain control by splitting doubleheader with Atlanta
Didn’t find what you were looking for?