CLEVELAND — CC ya in Houston.

CC Sabathia left his mark on Progressive Field Wednesday night in Game 5 of the AL Division Series. In more ways than one.

Sabathia pitched lights out, striking out nine in 4 1⁄3 innings before running out of gas. He left with a 3-2 lead. The Yankees went on to a 5-2 victory to advance to the ALCS against Houston.

Sabathia’s right knee brace also left a huge divot on the grass between the mound and home plate when he slid on both knees to catch a popped-up bunt by Roberto Perez in the third inning. Sabathia and the Yankees had a big laugh about that. 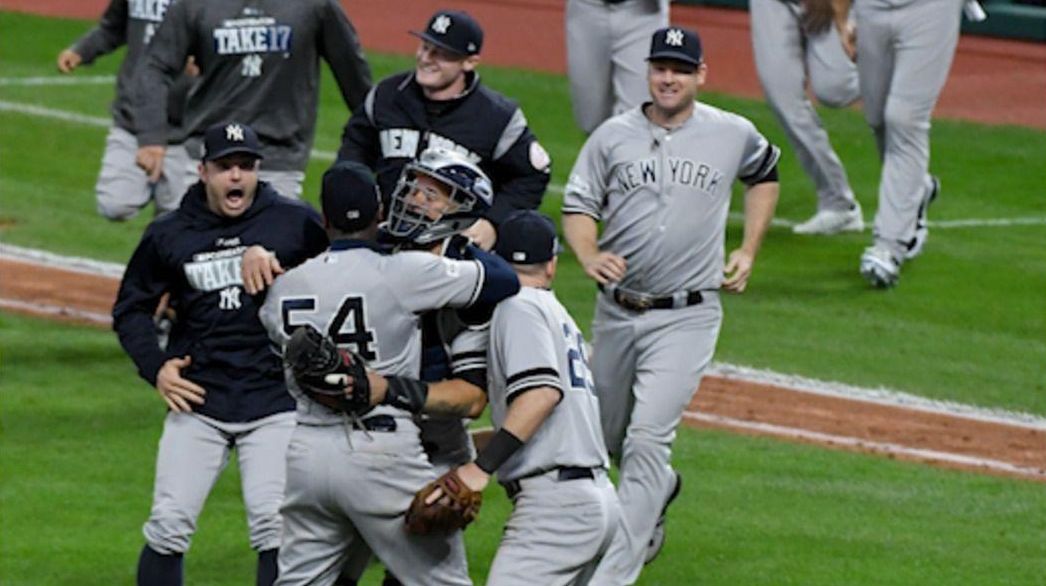 “I couldn’t believe I got there,” Sabathia said. “It was the brace that made the divot. Everybody was just laughing. It’s a big game. You need to get every out. I was just doing everything I could to catch that ball.”

Sabathia’s performance was no laughing matter in the win-or-go-home game. He retired the first nine Indians, with six strikeouts, as the Yankees built a 3-0 lead on a pair of home runs by Didi Gregorius off AL Cy Young Award candidate Corey Kluber. Gregorius, who came in with one hit in 13 at-bats, hit a solo homer in the first and a two-run shot in the third.

Sabathia became the first pitcher in postseason history to strike out as many as nine batters in fewer than five innings.

The Indians got their first hit when Francisco Lindor led off the fourth with a single. Sabathia shrugged and retired the next three batters, two by strikeout.

Sabathia struck out Carlos Santana to open the fifth to equal his season-high strikeout total. The next four batters — Austin Jackson, Jay Bruce, Perez and Giovanny Urshela — all singled as the Indians scored two runs to knock out Sabathia.

David Robertson came in and got Lindor to ground into an inning-ending 6-6-3 double play and maintain the Yankees’ 3-2 lead.

Sabathia didn’t pitch five innings, so he didn’t qualify for the win. That went to Robertson, who threw 2 2⁄3 hitless innings. His only blemish was a walk to Bruce with two outs in the seventh, but that might have been a pitch-around in a one-run game. Robertson gave up a tying home run to Bruce in the Yankees’ 9-8, 13-inning defeat in Game 2.

On Wednesday, Robertson watched Bruce take his base and then got Perez on a checked-swing comebacker to end the inning.

Aroldis Chapman, on for a six-out save, pitched a 1-2-3 eighth with two strikeouts. The Yankees scored two in a long top of the ninth to make it 5-2. The runs made Chapman’s job easier, but the lengthy wait on the bench to get back out there may not have.

Chapman walked Jose Ramirez to open the bottom of the ninth. Joe Girardi got Tommy Kahnle up in the bullpen. But Chapman retired the next three batters, striking out Jackson looking to end it. He ended up in a bear hug with catcher Gary Sanchez in front of the mound, not far from where Sabathia’s covered-up divot was still visible.