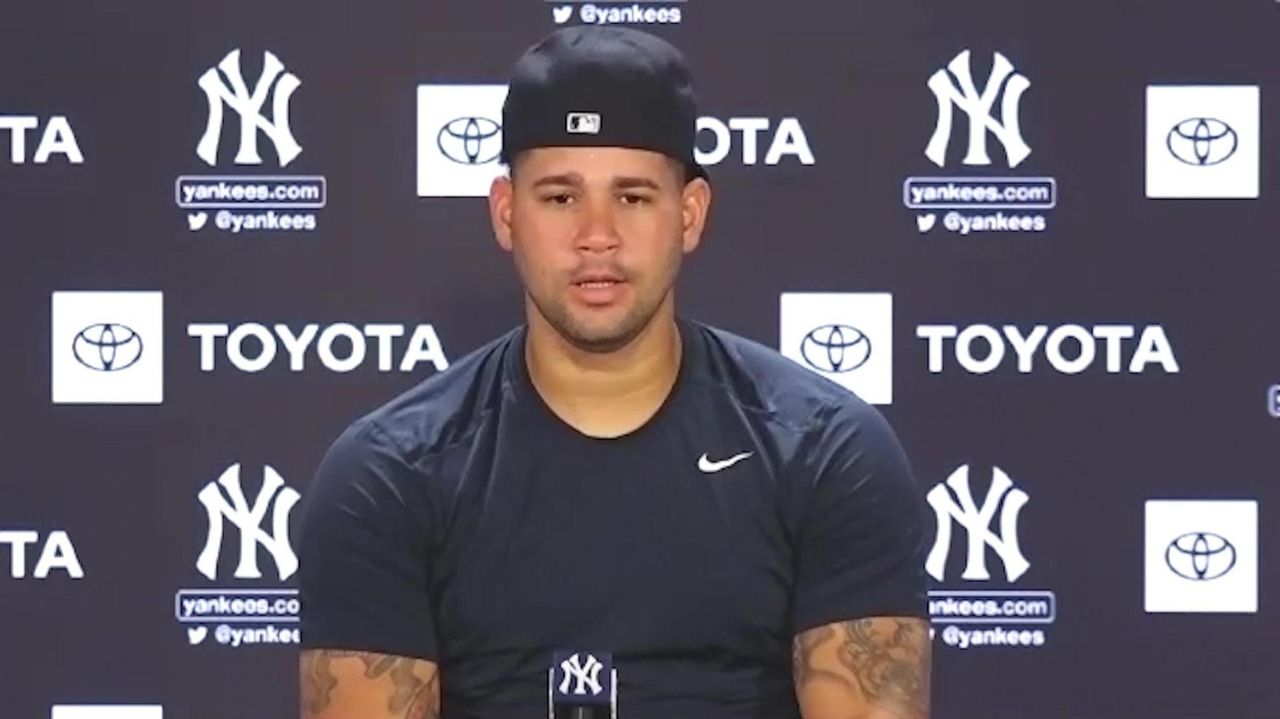 Durability has been an issue for Gary Sanchez, but the time off and shortened season should serve him well physically. The catcher discussed his health on Wednesday, July 8, 2020 at Yankee Stadium. Credit: New York Yankees

The long delay from the time spring training was officially suspended March 13 until camps reopened last week provided a silver lining for a handful of injured Yankees.

The hiatus provided enough time for Aaron Judge’s fractured right rib and Giancarlo’s Stanton’s right calf to heal, and allowed James Paxton and Aaron Hicks to mostly recover from their offseason surgeries to the point all anticipate being ready for the start of the regular season July 23 in Washington against the Nationals.

Gary Sanchez in a way benefited as well.

No one on a baseball field gets beat up like a catcher and it’s safe to say this July 8 – which would have been the Yankees’ 92nd game of their season had there been no COVID-19 pandemic – is the healthiest Gary Sanchez has ever felt this time of year in his baseball career.

Which should, he and the Yankees hope, allow the 27-year-old to play as many of the 60 regular-season games as possible.

Durability has been among the issues Sanchez has had in recent years. An assortment of injuries limited him to a combined 195 games the last two seasons — 89 in 2018 and 106 in 2019.

“We had a long time without playing baseball and just practicing [during that time] so of course your body feels fresh, healthy, ready to play,” Sanchez said Wednesday through his interpreter after his team’s workout at the Stadium. “As far as the amount of games I'm going to play, I'm not sure. I can tell you that any time my name is in the lineup I’m going to be ready to play. Eventually they're going to make a decision and see how many games I should be behind the plate, but if my name is in the lineup I'll be ready.”

Sanchez, the most polarizing Yankee among fans because of his difficulties at times defensively and a perception – sometimes fair but oftentimes not – of laziness, worked throughout the spring on a new catching stance with the club’s new catching coordinator, Tanner Swanson.

Swanson, formerly with the Twins, was teaching Sanchez and the rest of the catchers a one-knee stance in which the catcher’s knee is placed on the ground. Sanchez had mixed results in the spring but, he said, the work continued when he arrived at his home in the Dominican Republic shortly after spring camp ended.

“The plan was to keep on working on everything we were working on during spring training,” Sanchez said. “Although I was in another country, I had a team of people practicing with me and we [he and Swanson] kept in touch almost every day. I would record my sessions and send it over to him and he would take a look and comment and would have me making adjustments. That was the plan, to keep on working on all the details as far as receiving and everything else and just having that communication back and forth.”

Sanchez, diagnosed with the regular flu shortly before camps closed down (he said he was never worried that he had COVID-19), caught two innings of Monday night’s intrasquad came and caught four of Gerrit Cole’s five innings Tuesday night. Sanchez’s body came through fine.

“I think two weeks [of camp] are going to be enough for me to get ready and be able to catch all nine innings,” Sanchez said of the July 23 opener. “Yesterday I caught five, and today I feel really, really good.”

Manager Aaron Boone was pleased with Sanchez’s work in the spring and has liked what he’s seen five days into camp.

“To be able to get out there last night for four innings (after two the night before) with Gerrit, I thought they did a really good job,” Boone said. “They ran through a mock kind of game plan beforehand and had what would be like a normal meeting; between pitching coach [Matt Blake], Gary and Gerrit and I felt like they were on a good page last night. I thought Gary did a really good job. I’m confident the bat’s going to be there…I'm encouraged about where he is right now.”