Domingo German of the Yankees pitches during the first inning against the Toronto Blue Jays at Yankee Stadium on Sunday, April 4, 2021. Credit: Jim McIsaac

After watching the Yankees go 0-for-9 with runners in scoring position and strand 10 in an Opening Day loss to the Blue Jays on Thursday, Aaron Boone said the last thing concerning him was the offense.

"No, we’ll be fine," he said. "We’ll get that rolling sooner rather than later."

Given the back of the baseball card for the majority of players in the everyday lineup, that unquestionably is true.

Certainly not on Sunday afternoon, as the Yankees spent most of the afternoon flailing at Blue Jays pitching in a 3-1 loss in front of 10,066 fans who might have been too bored to bother to boo them.

The Yankees (1-2), who dropped the season-opening series to a young Toronto team expected to contend for an American League wild-card spot — and, if everything goes well, perhaps the AL East title — managed only five hits. In the first three games, the Yankees scored eight runs and hit .218 with a .620 OPS and 29 strikeouts.

"[To] be honest, I don't really feel like we're clicking just yet," Clint Frazier said in response to a question about the Blue Jays’ staff. "Obviously, it's just a very small sample size. But there's not really many pitching staffs that can really shut us down whenever we're going, so I think it's just a matter of getting back in the swing of things. I think it’s just a matter of time."

The outfielder later added with a smile: "It’s going to click. No need to hit the panic button yet."

The Yankees did not have as many opportunities on Sunday as they had on Thursday and didn’t come through on the ones they did have, going 0-for-5 with runners in scoring position and stranding five against six Blue Jays pitchers. 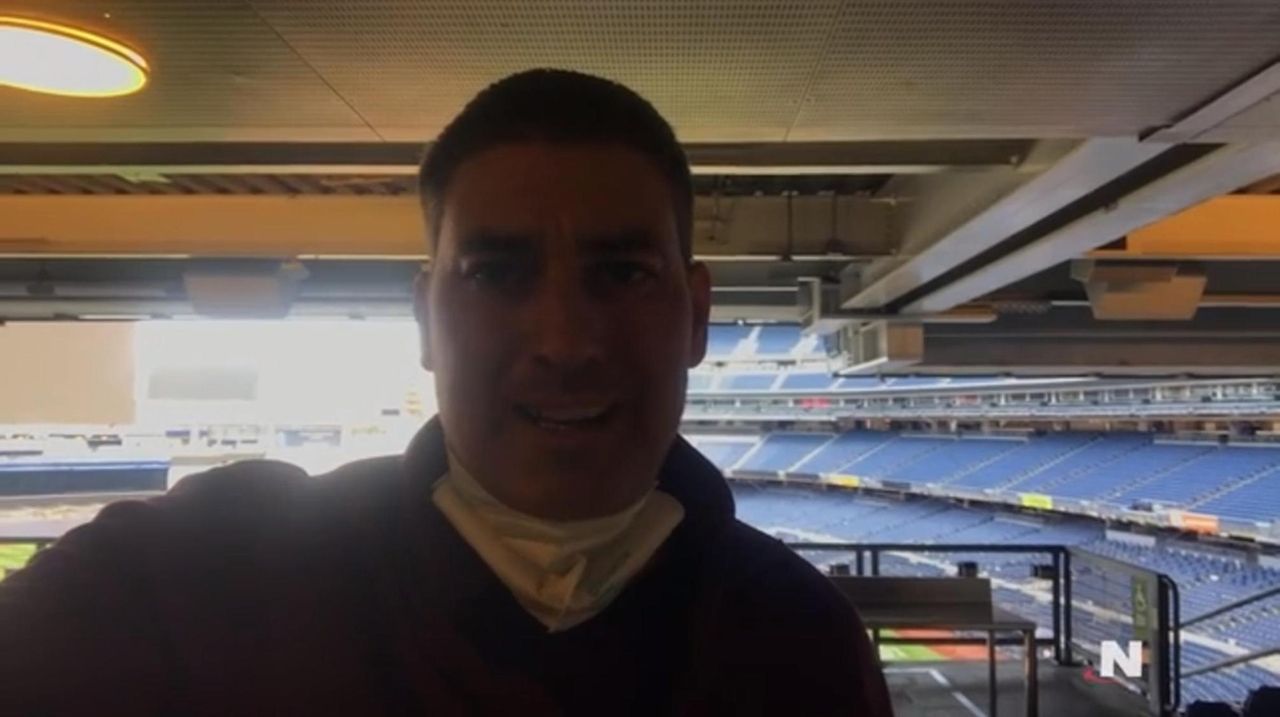 Yankees not panicking after losing opening series The Yankees are 1-2 after their first series of the season, losing a rubber game against the Blue Jays on Sunday, April 4, 2021, at Yankee Stadium. The team, however, isn't too worried. Newsday's Erik Boland has more from the Bronx. Credit: Newsday / Erik Boland

"They held us down for the most part this weekend," Boone said. "We obviously today didn't muster a lot, didn't have a lot of great scoring opportunities. Just a little bit of a cold weekend, [and] part of that's them coming in and pitching well against us."

The bright spot for the Yankees?

That would be righthander Mike King, who was brilliant in relief of Domingo German. King allowed one hit and one walk in six scoreless innings, striking out three and retiring the last 16 batters to face him. King threw 68 pitches in his stint, as did German in half as many innings, and the reliever needed only 44 pitches to get through the final five innings.

German, coming off an 81-game suspension for violating MLB’s domestic abuse policy, was not sharp, allowing three runs, four hits and a walk in three innings. It could not have been much different from a spring training in which German was highly effective.

Two of the hits off him were a solo homer to rightfield by Vlad Guerrero Jr. and a two-run shot to leftfield by Randal Grichuk in the second inning that gave the Blue Jays a 3-0 lead.

The Yankees got their run in the fifth when Frazier led off with a bloop hit that he hustled into a double, tagged up on Gio Urshela’s long flyout to center and scored on Brett Gardner’s groundout to second.

King was part of an impressive series overall for Yankees pitchers, who allowed only three runs in each of the first three games.

"We just were a little bit cold overall throughout [the series], but these guys will get it rolling," said Boone, who is not considering lineup changes at the moment. "I’m not too worried about it. It’s frustrating any time you don’t score runs, especially when you pitch pretty well, but that’s also part of it."

Why was Stanton on bench? 'Just wanted to get a lefty in there'Manager said he wasn't going to have slugger play five straight games, so gave him a rest.

Without a first-round pick, it was all quiet on the Islanders' front
Yankees not willing to part with shortstop prospect Volpe
Mets trade for lefty Rich Hill to help fill void in rotation
Megill outpitches Matz, Alonso hits two HRs in Mets' win
Rangers trade Buchnevich to Blues for forward Blais and a pick
After Yanks blow early opportunity, Devers drives in five with two HRs
Didn’t find what you were looking for?