Yankees' Gary Sanchez returns to the dugout after he strikes out swinging as Yankees manager Aaron Boone, left, adjusts his cap during the seventh inning against the Miami Marlins in an MLB baseball game at Yankee Stadium on Sunday, Sept. 27, 2020. Credit: Kathleen Malone-Van Dyke

The Yankees dodged a bullet in this sense:

Even with their hard-to-fathom skid to end the 2020 regular season, which concluded with a going-through-the-motions 5-0 loss to the Marlins at the Stadium on Sunday afternoon, they’ll avoid a date in this week’s wild-card round with the top-seeded Rays, a team that clinched the AL East title early last week and went 8-2 against the Yankees this year.

Not that a trip to the Midwest for the best-of-three wild-card round against fourth-seeded Cleveland, whom the fifth-seeded Yankees will face starting Tuesday, should be seen as a break — not with Cleveland's pitching staff.

And the way the Yankees played to end the season — losing six of their last eight to give them a final record of 33-27 — makes them a question mark this week regardless of opponent. 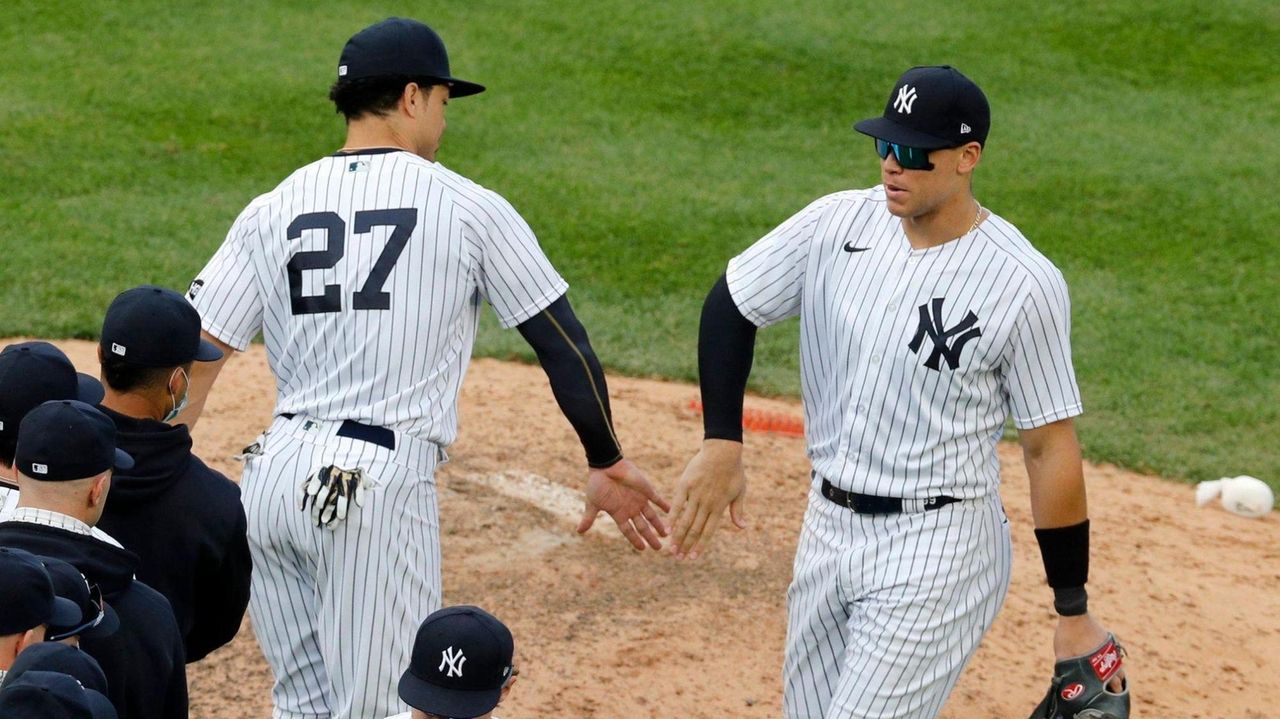 Which Yankees will show up for wild-card series in Cleveland? With the Yankees locked into the No. 5 seed in the playoffs and a trip to Cleveland for the wild-card round after Sunday's regular season finale, Newsday's Yankees beat writer Erik Boland discusses what to expect from the team entering the postseason after a streaky 60-game campaign. Credit: Newsday / Erik Boland

"I don’t think you ever know," Aaron Boone said of the crapshoot the postseason typically can be, this one in particular. "You trust, and I trust, that we have a team that’s capable of going on out and winning . . . Anything can happen in these. Hopefully we go out and get clicking offensively. We know if we’re playing our best baseball, we not only can play with but beat anyone. I know there’s that confidence with our group and we’re excited for that challenge."

A brief interlude: Make playoff predictions based on how a team finished the season at your own peril. There are countless examples of teams that have slumped going into the postseason only to catch fire to make or win the World Series, and vice versa.

As DJ LeMahieu, who went 2-for-3 with a walk on Sunday to win the American League batting crown with an MLB-high .364 average, put it: "I think we’re the best team in the league still. We’re definitely the most talented."

The most significant factors the Yankees will have going for them Tuesday?

They have a true ace, Gerrit Cole, set to go in Game 1. The righthander, signed to a nine-year, $324 million free-agent deal last offseason, is pitching the best he has all season, going 3-0 with an 0.86 ERA in his last three starts.

It hasn’t shown much in their recent offensive production, but the Yankees are the healthiest they’ve been all year, with Aaron Judge, Giancarlo Stanton, Gleyber Torres and LeMahieu all October-ready.

Regardless, the Yankees made it difficult to focus on anything but their warts as the playoffs beckon. Sunday brought many of those together, including sloppy defense and an inconsistent offense.

On this day, the Yankees could not take advantage of Marlins righthander Jose Urena being forced from the game after taking LeMahieu's 104-mph line drive off his right forearm with one out in the third inning. Urena suffered a non-displaced ulna fracture in the forearm and is out for the postseason. Lefthander Daniel Castano came on and threw 6 1/3 scoreless innings.

Yankees rookie Clarke Schmidt, auditioning for a postseason roster spot, probably didn’t do enough to secure one as he allowed three runs and four hits in four innings.

"We've played some baseball here that we'd like to forget," said Brett Gardner, a pending free agent who said it crossed his mind that he might have played his last game at the Stadium. "Hopefully starting on Tuesday, we get on a roll. It’s not always the best team that wins in October, it’s the team that plays the best in October. Hopefully that’s going to be us."

Boone says Voit's foot injury isn't as bad as it looksLuke Voit wound up the MLB home run champion with 22 and DJ LeMahieu had MLB's highest batting average (.364). Lennon: Streaky does not begin to describe Yanks in 2020The short season has been a series of hot and cold stretches, and mostly cold for a handful of stars.  Which Yankees will show up for wild-card series in Cleveland?Newsday's Yankees beat writer Erik Boland discusses what to expect from the team entering the postseason after a streaky 60-game regular season.