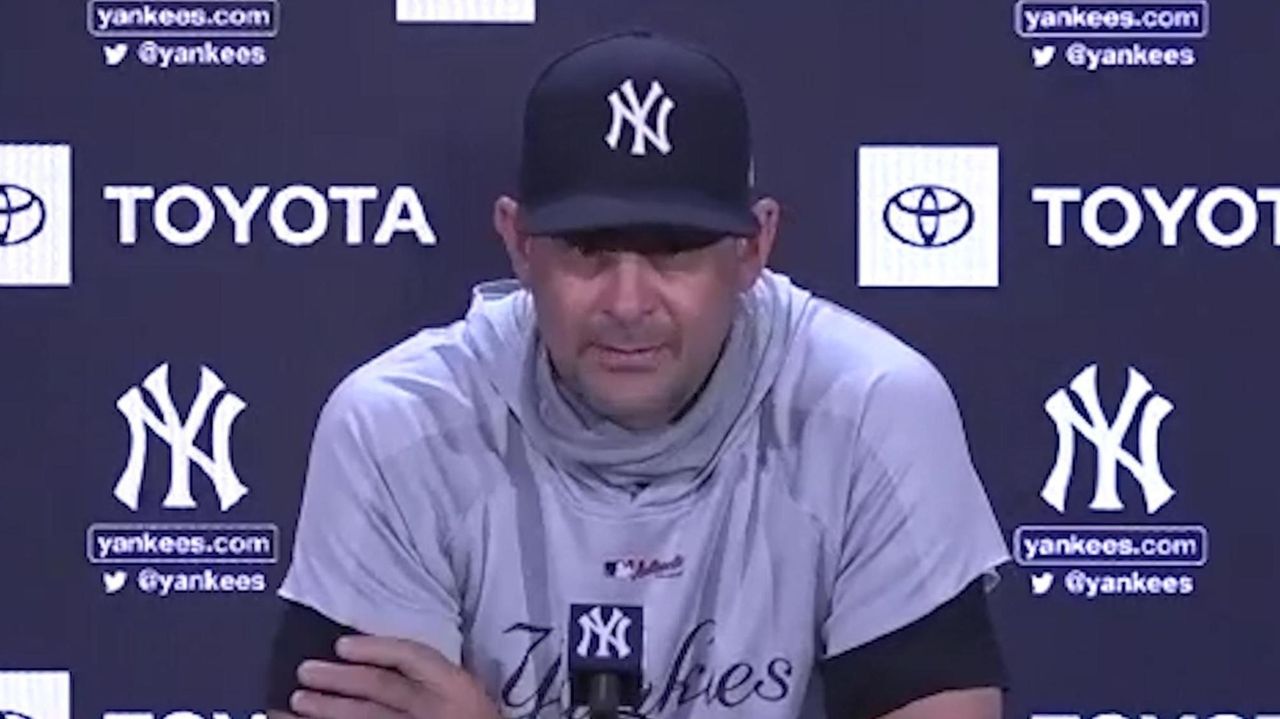 The Yankees on Sunday talked about getting ready for the season under extraordinary circumstances, and manager Aaron Boone talked about some players on other teams opting out of the season. Credit: YES Network

One day later, the Yankees were able to breathe a sigh of relief.

A pall was cast over Saturday’s resumption of Yankees spring training when Masahiro Tanaka took a Giancarlo Stanton line drive squarely off the right side of his head during a simulated game. He was taken to the hospital.

But Tanaka, who lay mostly still on the mound for about five minutes after being hit by the 112-mph liner, was released from NewYork-Presbyterian on Saturday night and was back at the Stadium on Sunday morning.

“We’ve seen him here today, walking around acting like his normal self, so I’m hoping that he’s in the clear,” Brett Gardner said. “Just a very scary incident.”

Aaron Boone said after Sunday’s workout — Day 2 of Spring Training II at the Stadium — that Tanaka had been diagnosed with “a mild concussion” but no longer was symptomatic.

“Really since he got to the hospital, pretty much he’s been symptom-free and feeling good,” Boone said. “Regular appetite, regular night’s sleep, in good spirits popping around today. So I think at this point, we’re really encouraged.”

Still, given the unpredictability of concussions, Boone wasn’t ready to declare when Tanaka will resume throwing.

“I think all the signs are pointing that he really dodged a bullet there, obviously,” he said. “We’re encouraged where he is, but we’ll take it day by day and hopefully it’s something that won’t be too long.”

Boone said “I hope so” when asked if he was certain that Tanaka will be ready by the start of the season July 23.

“I don’t want to speculate too much, because any time you go into the concussion protocol, and even though everything’s looking positive right now, you still want to get through these days and make sure he’s symptom-free and able to do everything from an athletic standpoint without generating any symptoms or anything,” Boone said.

Tanaka tweeted, in English and Japanese, shortly after arriving home from the hospital: “I appreciate all the support. I feel it a bit right now, but I’m all good. Going to try to get back on the mound ASAP! Thanks again for all the encouraging words!”

Jordan Montgomery followed Tanaka to the mound Saturday and used the protective L-screen that pitchers generally have in front of them for live batting practice sessions but almost never for simulated games. It was a simulated game for Montgomery, but he went with the screen nonetheless.

“After yesterday, seeing that happen, I just wanted to play it safe, especially first time out there,” said Paxton, who had lower-back surgery Feb. 5 but is expected to be ready for the start of the regular season.

“What happened yesterday was so scary. Luckily it doesn’t happen very often, but I just wanted to play it safe the first time out. Next time I think it’ll be more of a sim game setting, so the screen won’t be out there. But yeah, especially after yesterday, it was a conscious decision just to have it out there for safety.”

Paxton, like just about any pitcher who has spent a decent amount of time in the big leagues, has been hit by line drives, though never in the head.

“A ball comes back at you that hard, there’s really not much you can do,” said Paxton, who while with the Mariners was forced from a 2018 game in Oakland after Jed Lowrie smoked him on the left arm with a 96-mph liner.

“You kind of just get lucky if you put your glove in the right spot. That ball [hit by Stanton] came back, I think they said 112 [mph]. There’s really nothing you can do about that. It’s just something that happens here and there, and you just pray that it doesn’t happen.”