Yankees starting pitcher Jordan Montgomery throws a pitch to the Orioles during the third inning of a game on Sunday in Baltimore. Credit: AP/Julio Cortez

BALTIMORE — No excuses for this one.

Even with a lineup seemingly held together with baling wire and duct tape — not to mention the announcement earlier in the day of a ninth member of their traveling party testing positive for COVID-19 — a Yankees sweep of the Orioles was there for a taking.

Two of the Yankees slumping the worst this season — Gary Sanchez and Clint Frazier — hit back-to-back homers in a four-run first inning, spotting Jordan Montgomery a big lead before he threw a pitch.

But Montgomery had next to nothing and, after the absurdly hot Aaron Judge added his fourth homer of the series in the third inning, the offense completely stalled, leading to a 10-6 loss in front of 11,070 at Camden Yards. 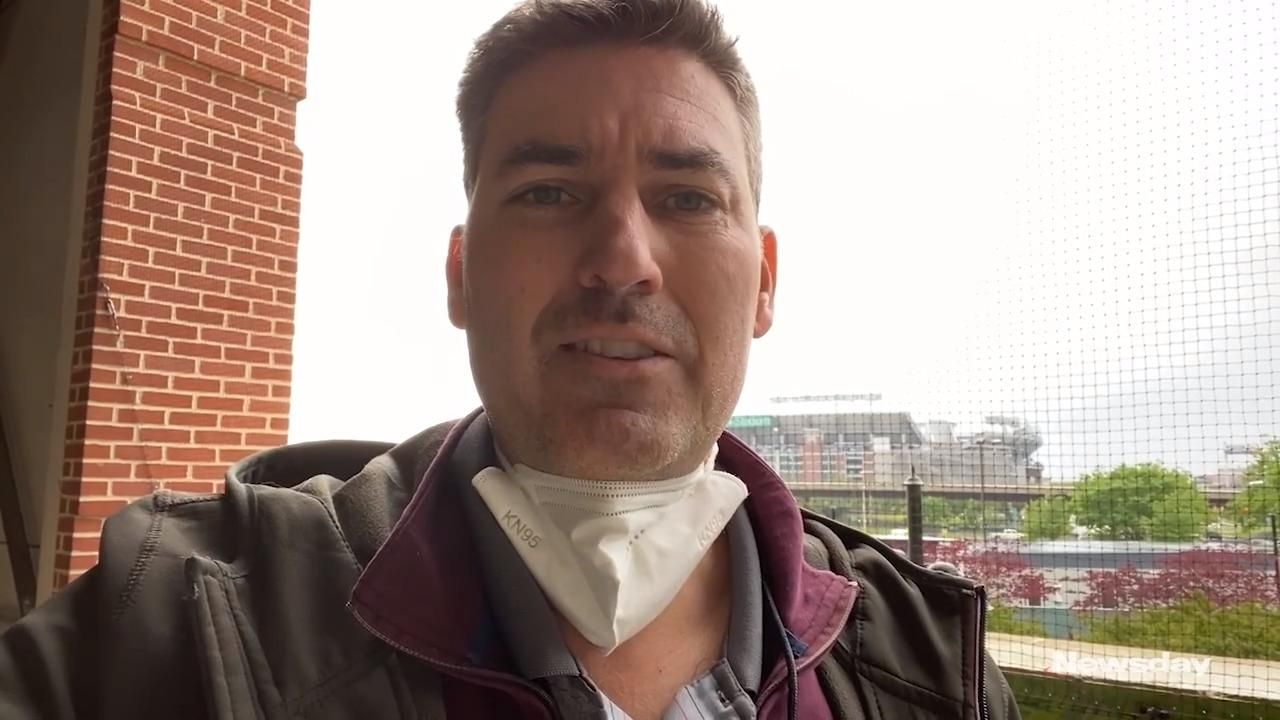 Yankees denied three-game sweep in Baltimore Jordan Montgomery struggled in three innings of work as the Yankees failed to complete the sweep in a loss to the Orioles on Sunday in Baltimore. Newsday's Erik Boland has more. Credit: Newsday / Erik Boland

"I don't know," Montgomery said of his issues after a three-inning outing in which he threw 76 pitches and allowed five runs, six hits and two walks. "I'm going to have to look at it tomorrow and kind of reevaluate and just try and get better."

The Yankees (22-18) fell to 4-2 on this three-city, 10-game trip that continues Monday night against the Rangers in Arlington, Texas.

The four-run first-inning eruption was highlighted by a two-run homer by Sanchez, who came into the game hitting .190, and a solo blast two pitches later by Frazier, who entered the day hitting .141.

Judge went 2-for-3 with a 443-foot homer, giving him 13 hits in his last 22 at-bats. His 12th homer — which tied him for the major-league lead with Shohei Ohtani, Mitch Haniger and Ronald Acuna Jr. and gave him home runs in five of the last six games — with one out in the top of the third gave Montgomery a 5-2 lead, but the Orioles (17-23) tied it in the bottom half. The Yankees managed only one hit in the next four innings as Baltimore pulled away.

"A lot of things could have gone differently today, but it just sucks because the hitters really gave me a lead and I kind of let them down," Montgomery said.

Montgomery's bread and butter is inducing soft contact with his array of off-speed pitches to complement a low-90s fastball. While the lefthander said he wasn’t sure what ailed him Sunday, Aaron Boone had an idea.

"Maybe not his real good swing-and- miss secondary stuff today, and I thought they did a good job of sitting on it in some situations and putting some good swings [on them]," Boone said. "And they did a really good job with two strikes. And they got some big two-out hits. But I think it was just a little bit of that, just having a hard time putting guys away."

Baltimore took the lead for good in the fourth against losing pitcher Mike King on doubles by Cedric Mullins and Trey Mancini. Maikel Franco’s two-run homer in the seventh off Wandy Peralta, unscored on in his first six appearances as a Yankee, gave the Orioles an 8-5 lead.

Ryan Mountcastle’s two-out, two-run single in the eighth off Luis Cessa made it 10-5.

Frazier and Miguel Andujar opened the ninth with singles against Cesar Valdez and DJ LeMahieu’s two-out RBI single made it 10-6, but Valdez struck out Luke Voit to end it.

With the Yankees still within striking distance in the eighth, trailing 8-5, Voit led off against lefty Tanner Scott with a single and Judge walked on four pitches. But lefty Paul Fry got Gio Urshela to ground into a 6-4-3 double play — he also hit into a double play with none out and the bases loaded in the first inning before Sanchez and Frazier homered — and Sanchez took a called third strike.

It was the fifth time this season that the Yankees have won at least the first two games of a series and failed to complete the sweep.

"They put it on us a little bit with a lot of big at-bats and a lot of two-out at-bats today," Boone said of the failure to sweep. "We go out and get four in that first inning and obviously you feel good about that, but just weren't able to add on, and they chipped away. I thought we came out with a with a good focus today and just couldn't close it down."

Lennon: Disappointing day, but Judge's surge is a bright spotThe Yankees were unable to complete a sweep for the sixth time in seven chances.