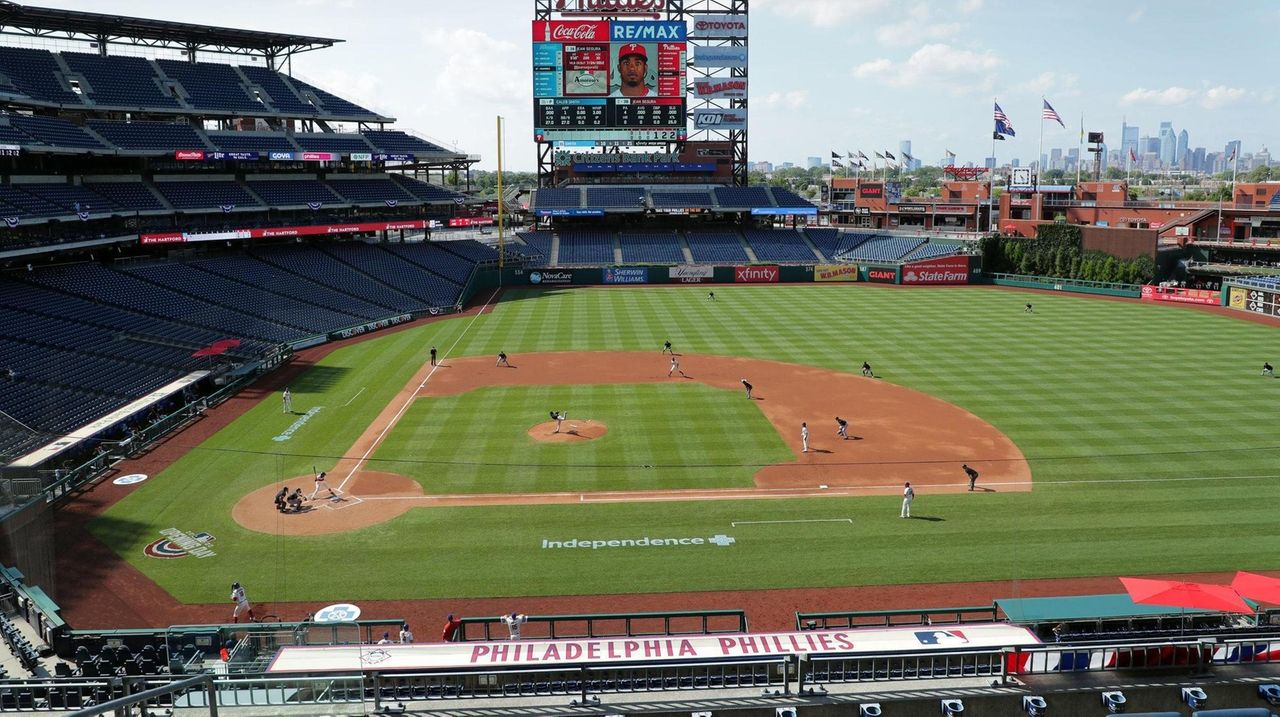 Newsday's Yankees beat writer Erik Boland spoke from Citizens Bank Park in Philadelphia on Monday on how the Marlins' COVID-19 outbreak impacted the Yankees, whose series opener against the Phillies was postponed. Credit: Newsday

PHILADELPHIA — It took less than a week for what was considered an inevitability to occur once Major League Baseball set this 60-game schedule: a significant outbreak of COVID-19 on one of its teams, in this case the Miami Marlins.

The reverberations were immediately felt.

Other games were to go on as scheduled, though talk in the sport throughout the day centered around just how realistic it is to believe the MLB season can be played to completion.

“Tonight’s scheduled games between the Miami Marlins and the Baltimore Orioles at Marlins Park and the Philadelphia Phillies and the New York Yankees at Citizens Bank Park have been postponed while Major League Baseball conducts additional COVID-19 testing,” MLB said in a statement released late Monday morning. “The members of the Marlins’ traveling party are self-quarantining in place while awaiting the outcome of those results.  Major League Baseball has been coordinating with the Major League Baseball Players Association; the Marlins; the Orioles; the Marlins’ weekend opponent, the Phillies; and Club medical staffs, and will continue to provide updates as appropriate.”

The Yankees awoke in their team hotel Monday morning in Philadelphia to the news that 13 members of the Marlins' traveling party had tested positive for the virus. The Marlins, who don’t play the Yankees until Sept. 25-27 at the Stadium, wrapped up a three-game series against the Phillies on Sunday.

Word quickly circulated, and it didn’t take long for much of the Yankees' traveling party to reach a consensus: Few, if any, of the group felt especially comfortable going into a clubhouse that less than 24 hours earlier had been occupied by the Marlins. (The Yankees were staying in a different hotel from the Marlins.)

"Postponing tonight's home opener was the correct decision to ensure we take a collective pause and try to properly grasp the totality of this situation," Marlins CEO Derek Jeter said in a statement. "We have conducted another round of testing for our players and staff, and our team will all remain in Philadelphia pending the results of those tests, which we expect later today."

J.A. Happ was slated to start Monday’s game for the Yankees, who opened the season by winning two of three in Washington against the Nationals, and Gerrit Cole was supposed to start Tuesday night.

As of early Monday afternoon, it was not yet known what MLB planned to do with Monday’s postponed game. One frustrated member of the Yankees’ traveling party, which remained quarantined in the team hotel in Philadelphia, texted to say the club had received “zero info” from MLB on the status of the series overall.

Shortly before 3 p.m., another member of the traveling party texted to say the club had not received any further information on the series but that, as of then, “we’re staying” overnight in Philadelphia.

“Just got the dinner schedule,” he texted, adding that the meal is catered by the hotel in a spacious conference room that ensures proper social distancing.

Before news of the postponement, the Yankees had media availability scheduled with Masahiro Tanaka, Cole and manager Aaron Boone. That availability soon was canceled and, as of late Monday afternoon, no one from the club had spoken publicly.

The Yankees were told the visiting clubhouse at Citizens Bank Park had been “thoroughly disinfected” multiple times since Sunday, though the team sent for some of its Yankee Stadium clubhouse staff to assist in Philadelphia if a game is played here Tuesday night.

One scenario being discussed earlier in the day — one very much embraced by the Yankees — was moving the series to New York. After the two-game Yankees-Phillies series at Citizens Bank Park, the teams were scheduled to play a two-game series at Yankee Stadium starting Wednesday. The Yankees bused to Philadelphia from Washington and will bus back to New York from here.

All Phillies players and staff were instructed to show up at the ballpark Monday afternoon to be tested again and then immediately return home.

Regardless of those results, one Yankees insider put it in simple terms.

“I don’t see us being any more comfortable being in that clubhouse tomorrow,” he said, “than we would have been today.”

Virus concerns restrict Mets' travel routinesIn the age of the COVID-19 pandemic, the club is eschewing air travela plane and taking buses with no more than 10 passengers per bus, according to manager Luis Rojas. Torres' HR, late RBI single lift Yanks past Nats in finaleTorres' solo home run in the seventh inning put the Yankees on the board, and his eighth-inning liner up the middle put them ahead for good.

2:22
Why Yanks may be turning corner with sweep of Jays
Mets waste Marcus Stroman's gem, fall to Cubs
Isles lose a defensive battle in Game 3, Lightning take 2-1 series lead
0:39
Isles fans tailgating outside Coliseum before Game 3
Best: This deficit seems a bit more daunting for Isles
Just your standard 1-3-6-2-5-6 triple play for the Yankees
Didn’t find what you were looking for?