Few Yankees fans need an explanation of what that means.

The Rays made the Yankees look bad much of last season and have done the same two games into this season.

The latest edition was an ugly 4-0 loss Saturday afternoon at Tropicana Field in which the Yankees got a second straight poor outing out of Domingo German — who was sent to the alternate site after the game — and yet another lackluster performance from their offense and defense, which has happened more than a few times eight games into the season.

"Ultimately it’s up to us collectively as a team to come in here and find a way to play better, try and get our pitchers a lead," said Brett Gardner, who went 1-for-4 with a double and made a highlight-reel catch in the fourth, taking an extra-base hit away from Brett Phillips in the left-centerfield gap after a lengthy run. "And offensively try and do a better job of hitting with guys on base, not just getting guys on base but hitting when we get guys on base and doing what the situation calls for. We haven’t done a very good job of that thus far.

"It’s obviously a long season, it’s still very early, but I don’t like to use that as an excuse. Hopefully tomorrow will be the start of a little run for us."

The Yankees — who went 2-8 against Tampa Bay in the 2020 regular season before being eliminated by the Rays in five games in the Division Series — have lost 12 of their last 14 regular-season games against Tampa Bay dating to 2019. They are 1-7 at Tropicana Field in that span.

"They obviously got the best of us last year," Gardner said. "It’s only been two games this year but they’ve obviously been on top of us this year as well."

The Yankees (3-5) were unable to capitalize on the potential break they were handed in the third inning. That was when righthander Chris Archer, who had struck out four in 2 1/3 innings, left with what the Rays (4-4) called right lateral forearm tightness.

But that just allowed manager Kevin Cash to dip into his stable of potent relievers sooner than usual, and five of them shut down the Yankees the rest of the way, allowing two hits and striking out five in 6 2/3 innings.

The Yankees committed two more errors and were outhit 10-5 after being outhit 13-7 the day before. They did not put a runner in scoring position after Gardner’s one-out double in the fourth.

"Gotta be better," Aaron Boone said of the defense. Then again, he just as easily could have been talking about the offense. Or German.

The righthander, who edged top prospect Deivi Garcia in spring training for a rotation spot, allowed four runs and eight hits in four innings Saturday after giving up three runs and four hits in three innings against Toronto last Sunday. 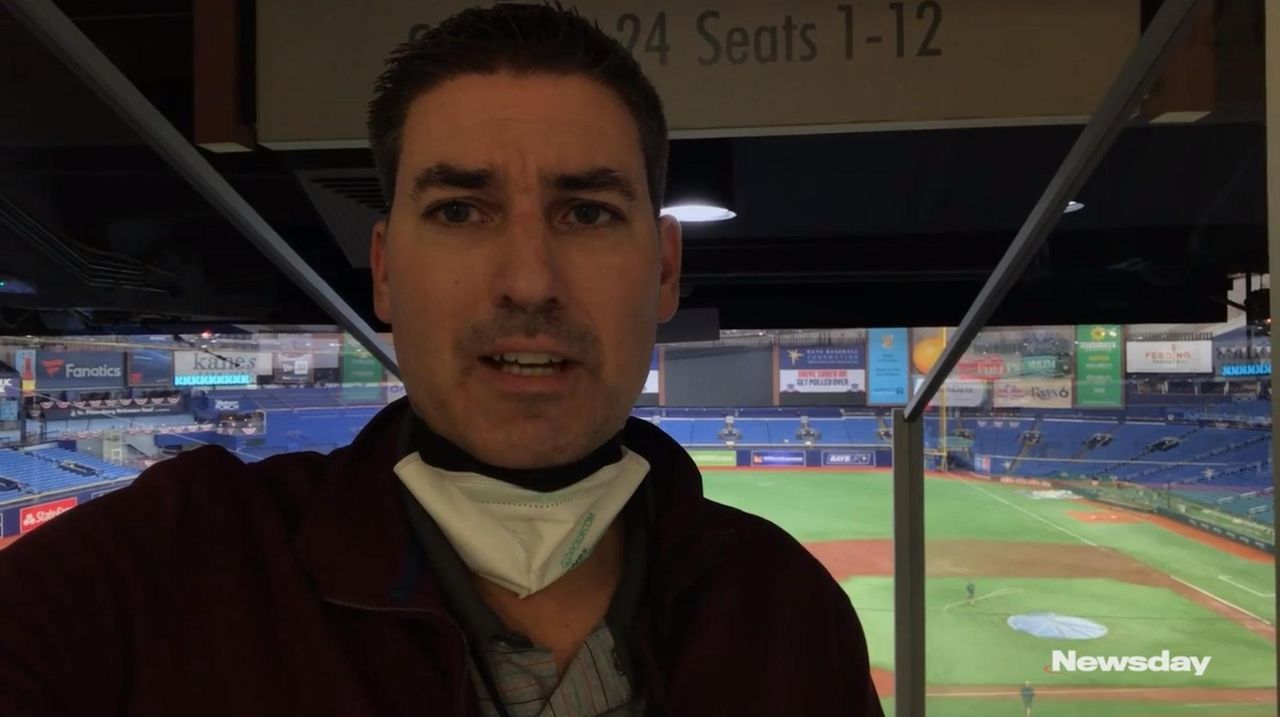 Yankees still looking for a spark as slow start to season continues The Yankees continued to struggle against the Rays on Saturday, falling for the second straight day and dropping to 3-5 in the young season. Newsday's Erik Boland has all the updates from St. Petersburg, Florida. Credit: Newsday / Erik Boland

Austin Meadows homered off the rightfield foul pole in the first — giving him seven homers in 29 games against the Yankees — and German gave up a two-run single by Francisco Mejia in the second that made it 3-0. Mejia's comebacker glanced off German's glove and trickled through the vacated hole between first and second and into rightfield.

Randy Arozena, who tortured Yankees pitching — and most opposition pitching last October in the Rays' run to the World Series — led off the bottom of the third by hammering a first-pitch sinker to center for his first homer of 2021 and a 4-0 lead.

German had dazzled in Grapefruit League play, but "spring training and the regular season are just different," he said through his interpreter, repeating a form of something he said after his previous outing. "I do feel really good. Today I felt I was more aggressive in the zone and I was able to attack those guys, but that’s how it goes. Hitters make adjustments; it’s up to us as pitchers to make adjustments. It’s up to me now to make the necessary adjustments."