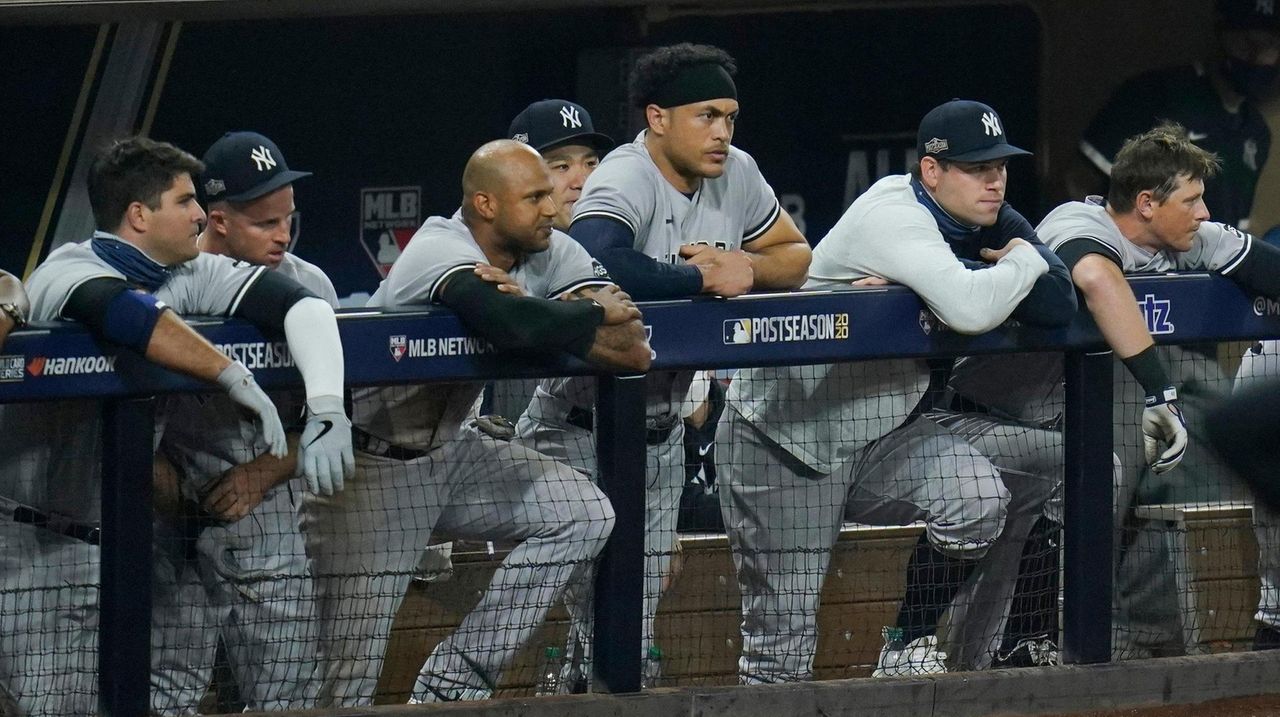 Newsday's Yankees beat writer Erik Boland discussed the Yankees' 7-5 loss to the Tampa Bay Rays in Game 2 of the ALDS on Tuesday, Oct. 6, 2020, in San Diego.

SAN DIEGO — Aaron Boone and the Yankees’ analytics department just might have outsmarted themselves.

It remains to be seen just how costly that proves to be.

The decision to start rookie Deivi Garcia but only allow him to throw one inning as the opener and instead piggyback veteran J.A. Happ with him backfired in a 7-5 loss to the Rays, who homered four times Tuesday night to even the best-of-five AL Division Series at one game apiece.

Game 3 is Wednesday night at Petco Park, with the Yankees serving as the "home" team for two straight games. Masahiro Tanaka, mostly a postseason stud in his Yankees career and the pitcher many thought would get the ball Tuesday night, goes against the Rays’ Charlie Morton.

"It’s just one loss," Aaron Hicks said. "We’re going to be playing again tomorrow. We just have to come out hot like we did (in Game 1)."

Trailing 7-4 in the ninth, the Yankees drew back-to-back walks to start the inning against Pete Fairbanks to make things interesting. Clint Frazier, after getting ahead 3-and-1, struck out and Gary Sanchez went down on three pitches. DJ LeMahieu lined an RBI single to center to make it 7-5 and put runners on the corners for Aaron Judge. The rightfielder, 0-for-4 with three strikeouts to that point, grounded out to end it.

Making a big deal out of handing the ball to Garcia – at 21 years, 140 days, the youngest pitcher in franchise history to start a postseason game – the Yankees’ plan all along was for the righthander to open the game before turning things over to Happ who, while offering no excuses, afterward acknowledged his preference to simply starting the game.

"I’ll let Aaron (Boone) talk about that (the strategy), I think," said Happ, who allowed a pair of two-run homers in his 2 2/3 innings that put the Yankees in a 5-1 hole after three.

Boone said the decision ultimately came down to dealing with the Rays' lefty-heavy lineup (there were five lefty hitters in Tuesday’s lineup), which Boone said often creates "platoon advantages" for Tampa Bay.

"Trying to counter that a little bit," Boone said of the decision to go short with the righty Garcia and then, hopefully, get more length from the lefthanded Happ. "Unfortunately, it didn’t work tonight."

There is, of course, no way of knowing how things would have turned out if Garcia, who allowed a two-out homer to Randy Arozarena to make it 1-0, had thrown more than an inning. But what isn’t debatable is that Happ, 2-2 with a 3.47 ERA this season, including 1-1 with a 2.22 ERA over his previous four starts, didn’t have that kind of stuff.

While not providing much of a poker face when it came to his displeasure for the night’s strategy, Happ, making his first appearance since Sept. 25, didn’t use it as an alibi.

"I didn’t perform," Happ said. "I’m frustrated that I didn’t and I’m not going to make excuses for why that happened."

Rays righthander Tyler Glasnow, 5-1 with a 4.08 ERA this season, but 5-0 with a 3.00 ERA in his last seven starts, allowed four runs and three hits – two of them home runs by the still scorching Giancarlo Stanton – over five innings-plus. Stanton’s monstrous 458-foot homer in the fourth pulled the Yankees within 5-4 but the team that totaled 31 runs in their first three postseason games to set a record, threatened but added only one run the rest of the way. Diego Castillo, Nick Anderson and Fairbanks, three of the best arms in the sport and part of Rays manager Kevin Cash’s hard-throwing stable of relievers, did what they did most of the season as Tampa Bay cruised to the AL East crown. The Rays struck out 18 overall to set a record for a nine-inning game by a pitching staff.

Stanton, leading off the second, tied it when he hit an absolute laser on a 2-and-2 curveball to right, his second homer of the series tying it at 1. He became the third Yankee to homer in four straight postseason games, joining Lou Gehrig and Reggie Jackson. Stanton’s three-run shot off Glasnow in the fourth, which came off his bat at 118.3 mph and traveled an estimated 458 feet to left, made it 5-4 but the offense, which totaled 31 runs the first three playoff games – and hit a record 11 homers in those games – didn’t have much left. Not this night.