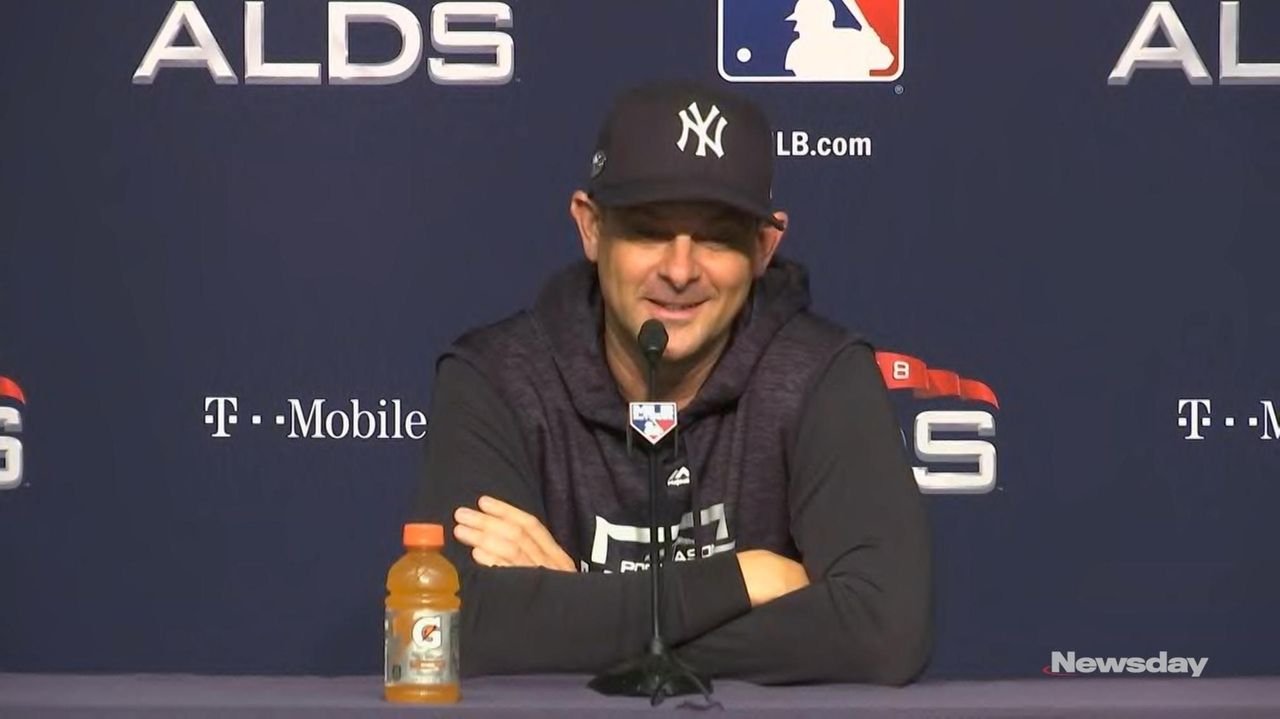 On Monday, before Game 3 of the American League Division Series against the Red Sox at Yankee Stadium, the Yankees talked about the playoff atmosphere created by the fans and what to look for in Tuesday's Game 4. Credit: News 12 Long Island

Aaron Judge’s numbers down the stretch after returning from the disabled list didn’t suggest he’d have this kind of start to his postseason. But that perspective came from focusing only on the numbers, Aaron Boone said.

“At-bat quality from the get-go [was good],'' Boone said.

Judge, who missed 45 games with a right wrist fracture, went 9-for-41 (.220) with one homer and 15 strikeouts in the final 13 games of the regular season. But he did draw eight walks and did hit his share of balls hard, all of which encouraged Boone.

“Even though he wasn’t hitting the ball out of the ballpark, the last [13]games that he got to play in, he was right away, I felt like, doing what Aaron does — control the strike zone, making good passes on balls,” Boone said. “I thought he was hitting the ball fine. And then, even for guys that hit a ton of home runs, those are things that still come in bunches.”

They have come that way in the postseason. Entering Monday night’s Game 3 of the Division Series against the Red Sox — in which Boston scored seven runs in the fourth inning to take a 10-0 lead — Judge was 7-for-12 with three homers and a 2.060 OPS in three games in this postseason. The highlights were two first-inning blasts, a two-run shot in the AL Wild-Card game against the A’s and a rocket off Yankees punching bag David Price in Game 2 against the Red Sox.

“He’s so quiet at the plate,” CC Sabathia, the Yankees’ Game 4 starter, said Monday of what impresses him most about Judge’s approach. “I feel like when he’s going good, he’s just waiting for you to throw him something to smash. You can just sense it, and you can feel it, and we all feed off of it. Just watching him, the way he is with our team and the energy he brings and everything. And for him to go out and hit homers first couple at-bats the last couple games has been huge.”

Judge was an MVP candidate for a second straight season when he went to the DL July 27 with the wrist injury. While he didn’t approach the stats he put up last year, when he hit .284 with an MLB rookie-record 52 homers plus a 1.049 OPS, the numbers still were more than respectable — .278, 27 homers, .919 OPS.

Judge said during his rehab that he derived motivation from the simplest of places: the desire to be back in uniform, fighting with his team.

“What motivated me was sitting out of the grind, sitting out those couple of months without having a chance to play with my teammates, grind out the good times, the bad times,” he said. “That’s what motivated me. I don’t like sitting on the bench. I’m just happy to be back and contributing in the postseason.”

Judge typically deflects questions that require too much introspection when he’s doing especially well at the plate. He smiled when asked if he felt particularly “locked in” at the moment.

“I’m just trying to have quality at-bats, I’m just thinking about my team,” he said. “I’m not trying to go up there and do too much. That’s been our motto all year when we’re good is just keep passing the baton. If that’s taking a walk or that’s working the count and letting guys see pitches, that’s all I’m trying to do. Keep having quality at-bats for my teammates, and if we keep the line moving with the type of offense we have, we’ll be in a good spot.”

Judge, without question, was in a good spot going into Game 4. Boone reiterated that didn’t surprise him in the least, based on that final two weeks of the regular season.

“I wasn’t worried,” Boone said. “I was really encouraged actually with what I saw from him when he did come right off the DL, spending that amount of time and not getting a chance to have a rehab outing. That was my biggest concern was how is he going to be timing-wise, rust-wise. And I felt like he beat my expectations right out of the gate for that.”

t of the gate for that.”

Red Sox crush Yankees, 16-1, to take ALDS leadA Yankee Stadium atmosphere that Aaron Boone anticipated would be "special" turned out by night's ... Hicks out of Yanks' lineup again as Boone plays it safeBrett Gardner got another chance in the starting lineup Monday when Aaron Boone decided to ... CC Sabathia plans to pitch in 2019CC Sabathia doesn't intend for Tuesday night's outing to be the last game of his ... Inside the Yankees' 2018 ALDS rosterThe Yankees play the Red Sox in the 2018 American League Division Series. It's the first postseason meeting between the two rivals since 2004. Take a closer look at how general manager Brian Cashman constructed this year's team.