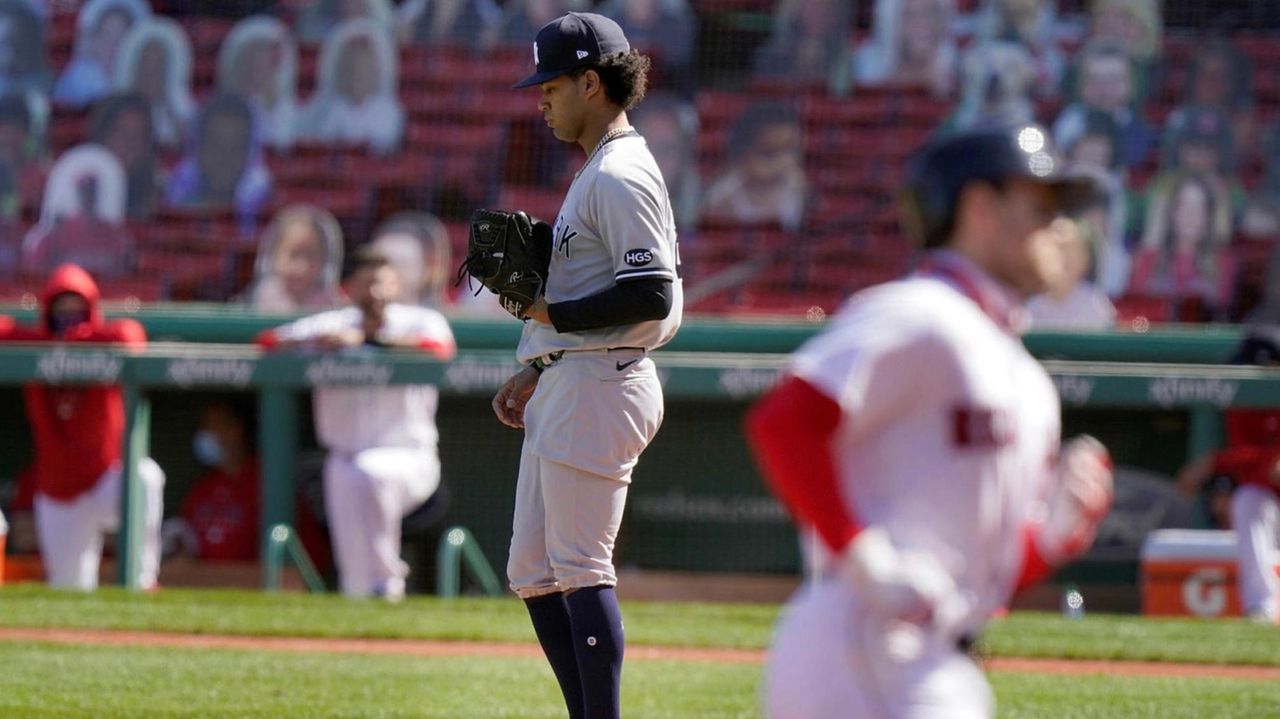 BOSTON — The way things had been going, a day like this was inevitable.

For rookie righthander Deivi Garcia, who until Sunday had been mostly brilliant since making his big-league debut Aug. 30.

And for the Yankees, who entered Sunday having won 10 straight games overall and having beaten the Red Sox a franchise record-tying 12 consecutive times.

It all came to an end in a humdrum 10-2 loss to Boston on a crisp and sunny afternoon at Fenway Park, a game that included 40-year-old journeyman catcher Erik Kratz pitching the eighth inning and a fan who somehow managed to sneak into the ballpark causing a 10-minute delay.

"Probably the last thing you’re thinking," Kratz said with a smile, "is we’re going to have a fan delay this season."

The Yankees (31-22) were held hitless for five innings by rookie righthander Tanner Houck, who made his major-league debut the previous Tuesday. They managed only three hits, including Luke Voit’s major league-leading 21st home run in the ninth.

The Yankees clinched a playoff spot Sunday night when the Mariners lost to the Padres. They remained 3 ½ games behind the AL East-leading Rays and will begin a four-game series in Buffalo against the third-place Blue Jays, who are four games behind the Yankees, on Monday night.

In the battle for the fourth seed and home-field advantage in the wild-card round of the American League playoffs, the Yankees fell a game behind the Twins (33-22), who have played two more games.

Garcia, 21, who was mostly terrific in posting a 2-1 record and 3.28 ERA in his first four outings, allowed six runs, eight hits and a walk in three innings. The big blows were a pair of homers by Michael Chavis on hanging sliders — a two-run shot over the Green Monster seats and onto Lansdowne Street in the second and a three-run blast in the third.

Garcia, who seemed to lose confidence in his slider and curveball, had trouble commanding his pitches. "I battled with that today," he said. "It kept me from being as aggressive as I wanted to be."

Garcia had been anticipating his first start at Fenway Park because it was the home for much of the career of his idol, fellow Dominican Pedro Martinez. Through his interpreter, however, Garcia said the outing was not a complete waste.

"It’s important for me that, although the outing was not the outing I expected, at the same time it’s a learning experience for me," he said. "There’s a lesson out of every outing."

Houck allowed one run and one hit in six innings against a Yankees team that outscored the opposition 85-25 during their 10-game winning streak.

"Thought we maybe expanded a bit on some pitches off the plate," Aaron Boone said. "But he was tough."

Houck took a 6-0 lead into the sixth before losing the no-hitter and shutout. Tyler Wade led off with a double and went to third on a passed ball. DJ LeMahieu walked and Voit grounded into a 6-4-3 double play, making it 6-1.

The most dramatic part of the day occurred with two outs in the top of the eighth when, with LeMahieu at the plate, a fan suddenly made his way across the Green Monster in left and eventually onto a camera platform in center. After the delay, the male fan was led away by stadium security and Boston police.

Kratz came on in the bottom of the inning and allowed a homer by J.D. Martinez to make it 10-1.

"Try not to make too much light of it because it could have been a scary situation," Boone said of the fan incident. "Hopefully everything’s handled. But it was definitely odd."