Jordan Montgomery #47 of the Yankees pitches during the first inning against the Boston Red Sox at Yankee Stadium on Friday, July 31, 2020. Credit: Jim McIsaac

Jordan Montgomery admired CC Sabathia from afar and then from up close when he eventually made it to the big leagues and shared a clubhouse with the veteran.

And so Montgomery could not have received a better endorsement than the one given by Sabathia, a mentor and close friend who retired after the 2019 season and who likely is Cooperstown-bound, before the Yankees’ home opener Friday.

Montgomery honored those words Friday night. The 27-year-old lefthander made few mistakes in his 5 2/3  innings, allowing one run, five hits and a walk in the Yankees’ 5-1 victory over the Red Sox at the Stadium.

“He’s been great for me, being there as a friend, checking in on me, telling me there was a light at the end of the tunnel,” Montgomery said of Sabathia. “He told me to trust the cutter; he’s been telling me that from Day 1. He’s been a great friend, a great mentor to learn from.”

It was the Yankees’ fifth win in six tries to open this strangest of seasons.

Montgomery, terrific in both Spring Training I and Spring Training II but still plagued by questions after missing most of 2018 and 2019 while recovering from Tommy John surgery, earned his first victory since April 21, 2018. He threw 81 pitches and struck out four.

“It’s been a long time coming for him. Proud of him,” Aaron Boone said. “I felt like he came in in a really good place. He had a great spring training for us, picked up where he left off in summer camp, and I think you’re seeing a kid with a lot of confidence right now.”

Montgomery was supported by two-run homers by Aaron Judge and Brett Gardner and a solo shot by Gio Urshela. It was the third homer in as many games for Judge and the first for Urshela and Gardner. 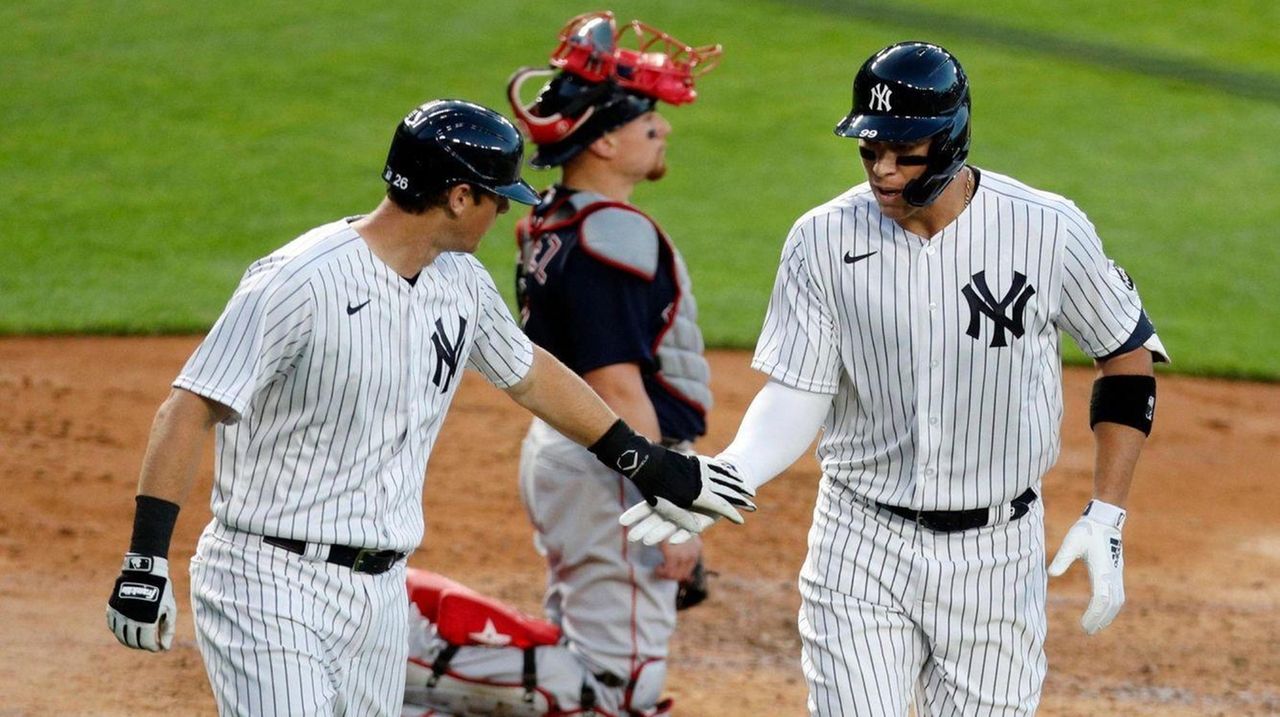 Chad Green struck out four in an electric two innings and Adam Ottavino recorded the final out of the eighth. Gardner’s 401-foot homer into the second deck in right off righty Colten Brewer in the bottom of the eighth made the ninth a non-save situation, so Jonathan Holder finished up.

All of it was part of what had to go down as the most unusual home opener in club history — one played before no fans.

Pregame ceremonies included the teams’ starters being introduced and lining up along the third- and first-base lines — at a responsible social distance — broadcaster Suzyn Waldman, a former Broadway performer, belting out an incredible national anthem and a moving tribute to local health care workers from the metropolitan area.

“Kind of bittersweet,” catcher Kyle Higashioka said of the night, “because I would think pretty much every single one of us would say one of the best experiences of playing for the Yankees is a packed house against the Red Sox. Without the fans, it’s not even close to the same experience, but we were glad to get the win.”

Judge called the experience “very different,” something he talked about with DJ LeMahieu on the bench and even with Christian Vazquez during an early-inning at-bat, telling the Red Sox catcher, “This place would be rocking right now.”

“But we enjoyed it,” Judge said. “We were still locked in and ready to go from the first pitch.”

Yankees get Chapman back, but Kahnle goes on ILKahnle, who started experiencing right forearm tightness Tuesday night during the team's workout at Camden Yards, was headed for the injured list Fridaywith what officially was termed a "right ulnar collateral ligament injury." Sabathia throws out first pitch for Yankees' home openerRetired lefthander dedicates free time now to work with Players Alliance and for social justice.