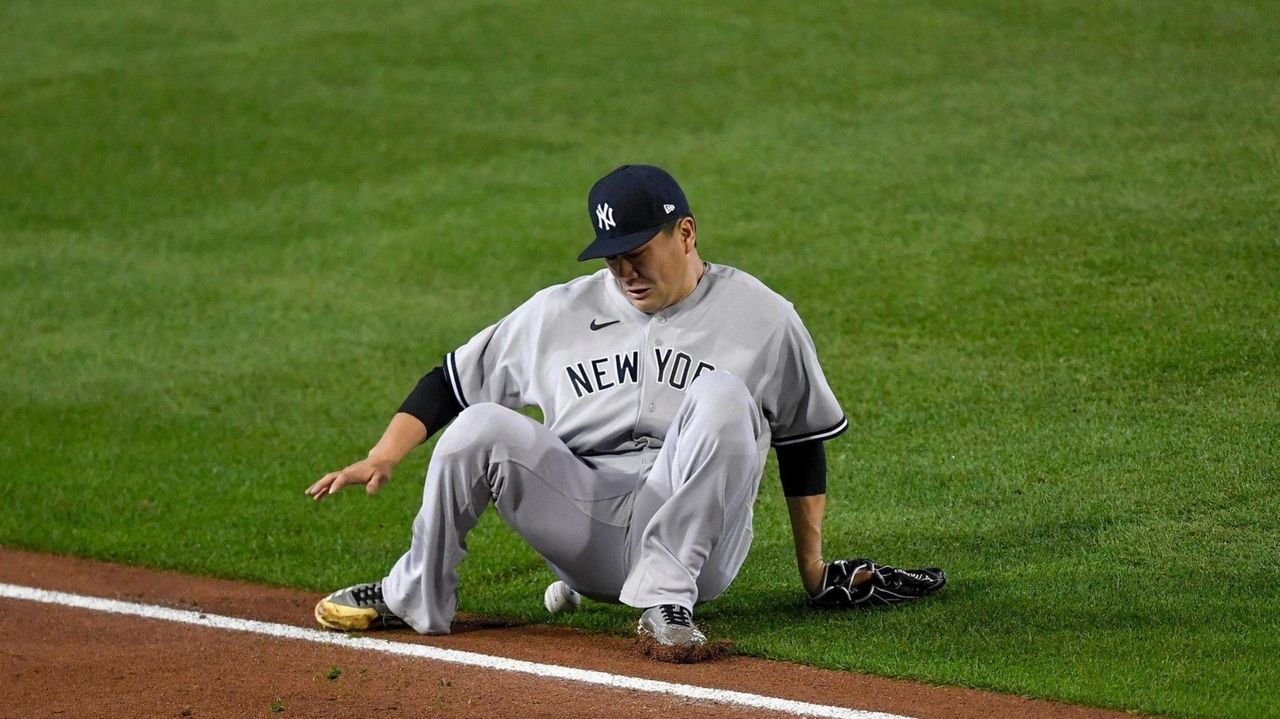 Newsday's Yankees beat writer Erik Boland discussed the Yankees' ugly 14-1 loss to the Toronto Blue Jays in Buffalo, N.Y., and where they stand in the crystallizing playoff picture. Credit: Newsday

BUFFALO – Masahiro Tanaka would be the first to acknowledge he wasn’t anything close to his best Wednesday night.

But the righthander, in his final outing before the playoffs, received almost no help.

Not from his offense, which mostly flailed and failed after raking the night before, and certainly not from his defense.

An overall slipshod performance from just about everyone wearing the road grays contributed to a hideous 14-1 loss to the Blue Jays at Sahlen Field, a defeat that all but assures the Yankees of having to travel for next week’s best-of-three wild-card round.

“That was not Yankee baseball at all,” Luke Voit said. “It was almost like we were the Bad News Bears.”

The Yankees (32-24), who were outhit 16-4 and who committed four errors in losing for the second time in three games of this four-game series against the Blue Jays (29-27), entered Wednesday 1 ½ games behind the Twins for the fourth playoff spot in the AL (and homefield advantage for the wild-card).

“We just didn’t play well tonight in (any) facet,” Aaron Boone said. “We’re a better baseball team than what we showed out there tonight. We have to move past this one and realize we have another important one tomorrow.”

Tanaka, who will start the second wild-card game next Wednesday – Gerrit Cole will pitch in Game 1 Tuesday – wasn’t good, allowing five runs (three earned) and eight hits over four innings in which he threw 91 pitches.

“All in all, it was a grind out there tonight,” said Tanaka, refusing to blame the poor defense behind him for the outing.

The pitcher instead said he had difficulty controlling his pitches at times with the swirling winds prevalent throughout the night.

“I think the wind was a bit of a factor tonight,” Tanaka said though his translator. “It was a bit hard to control some of the pitches because of the wind blowing from behind you toward home plate.”

Tanaka, in the final season of his contract so perhaps making his final regular-season appearance for the team he signed with before the 2014 season, departed with his club trailing 5-1. That deficit ballooned to 13-1 after Luis Cessa and Tyler Lyons – mostly the latter – gave up eight runs in the sixth.

Reserve catcher Erik Kratz, who brought his knuckleball to the mound Sunday in Boston, made another relief appearance Wednesday, allowing one run on a Danny Jansen homer.

Tanaka (3-3, 3.56), a playoff stud throughout his Yankees career, didn't pitch well but was undone by his teammates. And the bottom of the fourth/top of the fifth innings were a perfect encapsulation of the pitcher’s night – and the Bombers’ – on both sides of the ball.

Jansen, whose grand slam off Adam Ottavino highlighted Toronto’s 10-run sixth against the Yankees here Sept. 7, homered with one out in the fourth to make it 4-1. Cavan Biggio reached on the infield single and went to second when first baseman Luke Voit saw Tanaka’s on line pickoff throw glance off his glove (the Yankees had a play on a sliding Biggio at second but Gleyber Torres, who committed his team-high eighth error in the third that led to a run that made it 3-1, dropped the ball).

At that point of the game, with one out in the bottom of the fourth, the Yankees had more errors (3) than hits (2).

“We’re a lot better than we played, and we’ve got to come out tomorrow and show that,” Clint Frazier said. “Tonight’s just a bad night.”

Down 5-1 in the top of the fifth, the Yankees, 8-for-11 with RISP in Tuesday night’s 12-1 victory, loaded the bases with none out against Toronto lefthander Robbie Ray but came up empty. After Aaron Judge walked against former Yankee A.J. Cole to load the bases, Giancarlo Stanton struck out for the third time in three at-bats. Voit, an MVP candidate, popped to second and Torres’ rough night continued as he flied to medium right for the third out.

“I expect us to turn the page from this performance,” Boone said. “I know we’re capable of really special baseball and we’ve got to find that.”

They didn’t find anything approaching it Wednesday.