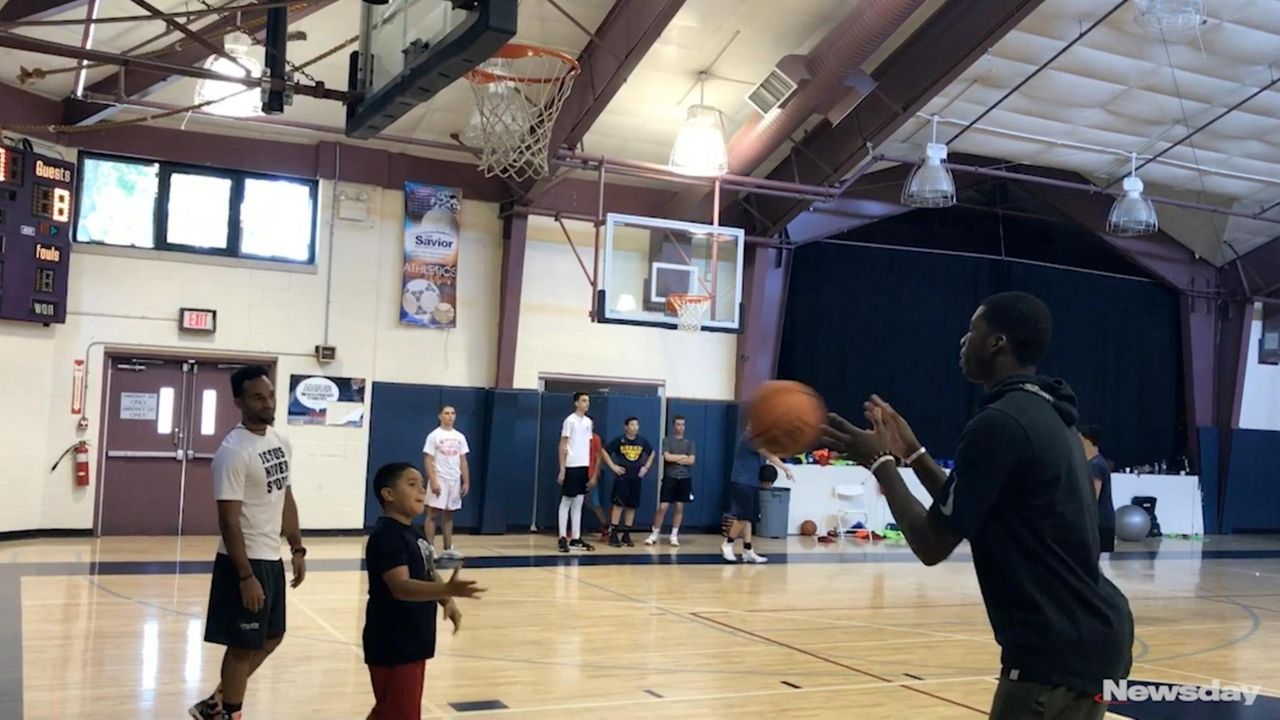 Cheick Diallo of the New Orleans Pelicans appeared at his alma mater, Our Savior New American in Centereach, for a summer basketball camp on Wednesday, July 18, 2018. Credit: Newsday / Kenny DeJohn

Organizers of the Our Savior New American basketball camp in Centereach don’t need to ask one of the school’s most recognizable alumni to come back each summer and speak to campers. Cheick Diallo does it by himself.

“It’s very special because we don’t ever have to ask him to do it,” said Eric Jacklitsch, the associate boys basketball coach at OSNA who coached Diallo from 2012-15. “He just says, ‘Hey, I’m here. Let me know what day you’d like me to come by the camp.’ He loves giving back. He loves the little kids. He loves giving back to show everybody that he’s a good role model in life.”

Diallo, a 6-9 forward/center entering his third year in the NBA with the New Orleans Pelicans, declined to speak to media, instead focusing his efforts on improving the roughly 50 participants in attendance.

After averaging 20 points and shooting 57 percent in four games in the Las Vegas Summer League, Diallo spent time teaching the pick-and-roll, among other basketball fundamentals.

If he noticed a flaw in the release or execution of a jumper, he stepped right in to make sure the campers — ranging from sixth to 12th grade – knew how to correct the problem.

“Cheick’s cared about his school, his community, his host family, his teammates from the moment that he came into our school and our program,” Jacklitsch said.

Diallo, 21, came to OSNA through its international program from Mali, Africa, for the second semester of his freshman year in 2012. After an impressive summer workout program, Diallo starred as a sophomore and rose through the ranks of prospects in the class of 2015.

He was the MVP of both the McDonald’s All-American Game and Jordan Brand Classic and was one-and-done at Kansas. He was drafted 33rd overall by the Clippers before a draft-night trade sent him to the Pelicans.

“It’s funny because he only started playing basketball about 10 years ago, but everything he’s been taught, he tries to teach the campers,” Jacklitsch said. “He tries to show them to current kids on our team who are from his country. He soaks up all the information that he learned, so he can give it to other people to help their lives.”

A question-and-answer session with campers allowed him to shed some light on life in the NBA. One camper asked about his former teammate DeMarcus Cousins and his decision to join the Warriors in free agency.

Diallo said that “the NBA is a business,” and although he’ll miss Cousins, he appreciated how much he learned from the All-Star forward. Campers also had the opportunity to take pictures and receive autographs.

“He understands that he’s in the top league in the world, and it’s a business, and you have to bring it every single day like it’s a job,” Jacklitsch said. “He’s the first one in the gym every single day. In the summertime, he goes all over and trains. He just shows everybody that you always have to work hard, no matter what happens in life.”

Irving will be kept busy during Nets' upcoming road-heavy schedule
He was the original Mr. Met
2022 NFL mock draft: The first 24 picks
Sorokin the difference in Islanders' win over Flyers
Trotz returns to coach Islanders vs. Flyers
Giants ready to start second round of GM interviews
Didn’t find what you were looking for?