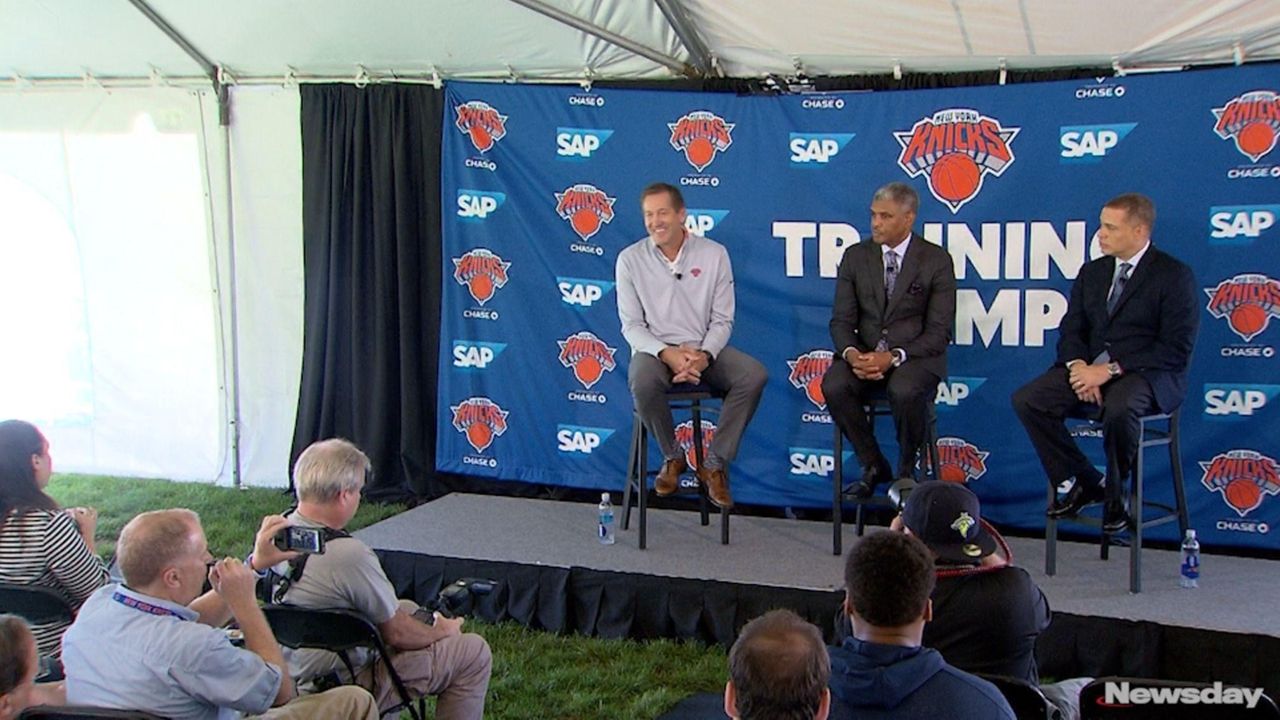 On Friday Sept. 22, 2017, Knicks team president Steve Mills and coach Jeff Hornacek said the Knicks have a good relationship with Kristaps Porzingis and it will only get better under new GM Scott Perry.   Credit: News 12 Westchester

GREENBURGH, N.Y. — The Knicks say they already have a good relationship with Kristaps Porzingis, and team president Steve Mills says it will get better with new general manager Scott Perry on board.

A frustrated Porzingis skipped last season’s exit interview with Mills, coach Jeff Hornacek and former team president Phil Jackson. Since Jackson was fired, the Knicks have gone out of their way to say Porzingis is their future and that they want to build around him.

Mills said the focus will continue to be making sure Porzingis is happy in New York going forward.

“We don’t focus or look back on what happened and the reasons behind it; all we can do is look forward,” Mills said yesterday at the team’s practice facility. “I’ve spoken to him when we made the changes and he’s very excited about where we’re going as I outlined how I saw this team moving forward.

Source: Melo expands list of teams he will waive no-trade for

One of the many knocks on Jackson was that he wasn’t good at building relationships. Mills made it sound as if that won’t be an issue anymore. But it still appears as though the Knicks have some fences to mend with Porzingis.

Porzingis stayed overseas for most of the offseason. He posted photos of his training on Instagram — he appeared to have added muscle — and played well for Latvia in the European Championships.

Porzingis hasn’t been at the Knicks’ practice facility since before last season ended. He is scheduled to fly into New York this weekend and be at the Knicks’ media day Monday.

One report said something Hornacek said led to Porzingis’ decision to not attend his exit interview five months ago. Hornacek wouldn’t address that. “KP and I have a good relationship,” he said. “I’m not going to comment on any reports that say otherwise. We texted with him all summer. We followed him through EuroBasket. We’re very happy with his conditioning, the way he played out there, the way he took on the role of leader for that Latvian team. I think he’s excited to get back. We’re excited to get back at it.”

The Knicks will expect more from Porzingis in his third NBA season. “We look forward to Kristaps having opportunities this year where he can be put into position to be the No. 1 guy,” Mills said. “So in the ebb and flow of games during the season, there will be opportunities where has a chance to do that. So we look forward to that happening and that happening in conjunction with Carmelo [Anthony].”

Porzingis has said he wanted to get stronger to help him stay on the court and handle double-teams and different defenses better. The Knicks liked what they saw in the Euro championships.

“I’ve been in contact with KP via text,” Mills said. “We congratulated him on how well he played this summer and we liked how he’s progressing. And he certainly indicated he’s excited about coming back and looking forward to a great year.

“I think we’re just looking forward to continuing our relationship with KP and helping him grow as a player and grow as a person. We feel really good about where we are with him.”