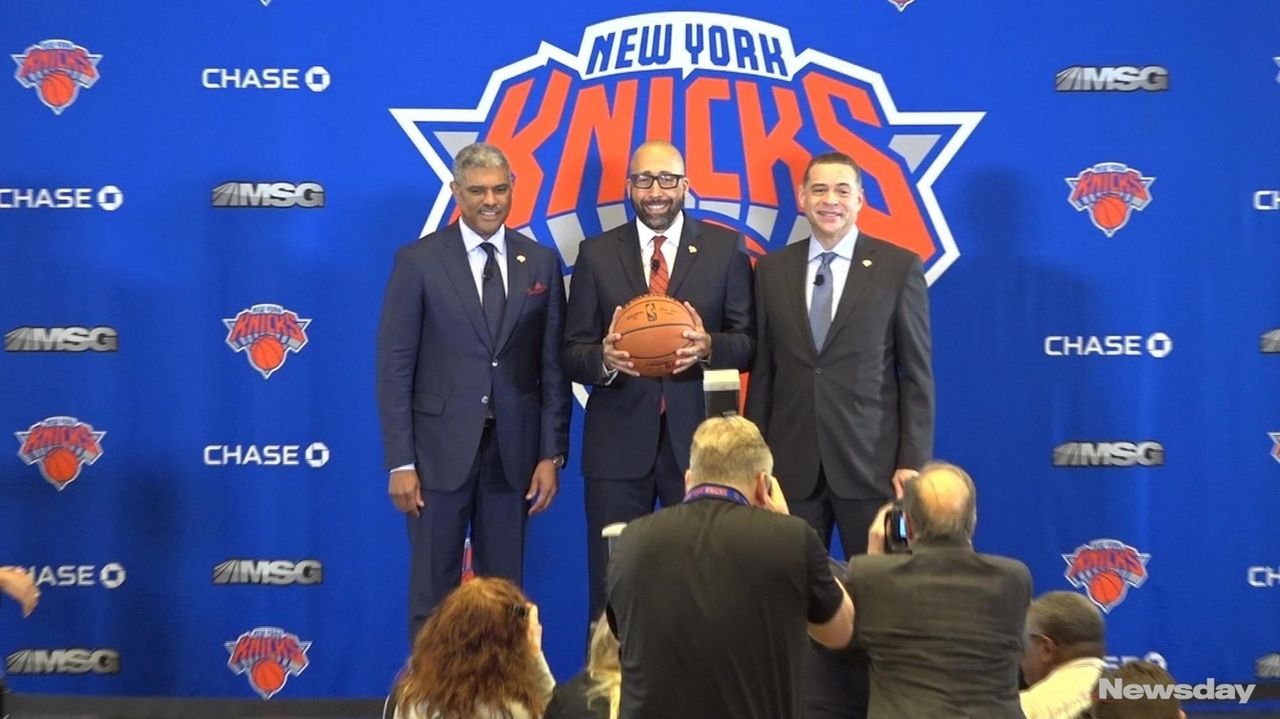 No franchise has won as many news conferences as the Knicks, who introduced David Fizdale as their 11th coach in the past 17 years on Tuesday at Madison Square Garden. But unlike the splashes the Knicks have made over the years with big-name hires such as Lenny Wilkens, Larry Brown, Isiah Thomas and Phil Jackson for the bench and the front office, this one had a different feel.

Knicks president Steve Mills and general manager Scott Perry both emphasized that, for a change, the franchise is not looking for a quick fix. They said owner James Dolan is fully committed to a more long-term approach to building a “sustainable” winning program.

“We have a commitment from Jim Dolan to not skip steps,” Mills said.

An 11-candidate search led to Fizdale, who took Memphis to the playoffs in his first season as an NBA head coach but was fired 19 games into his second season after a dispute with Grizzlies star Marc Gasol.

Despite that unhappy ending, Mills and Perry made it clear they see in Fizdale as a coach who embraces the modern NBA style of play that spaces the court while maintaining a commitment to defense. They also praised him as a communicator and a coach who believes strongly in player development.

Perry cited the “pedigree” Fizdale earned in eight years as an assistant on the Heat under team president Pat Riley and coach Erik Spoelstra at a time when the Heat won two titles with LeBron James and Dwyane Wade.

“We believe that experience will help lead our group of players in the right direction so we can build sustainable growth here,” Perry said.

Mills tackled the thornier issues of why the Knicks have floundered so often in recent years despite the big-name hires. “We’ve seen how things can go wrong,” Mills said. “I’ve seen a lot of mistakes and maybe not the right patience in terms of doing things the right way.

“We’re about wins, but we’re about creating something where we can win for a sustained period of time. We’ve seen a lot of shortcuts and swinging for the fences, trying to hit a home run all the time . . . We’re going to build this thing through defense and accountability, and we’re going to stay true to that.”

Despite the way things ended in Memphis, Fizdale had plenty of options, but if anything, he was drawn to the Knicks by the power of the Garden marquee. With his mother, wife and family members in the audience, Fizdale said, “I used to tell my mom I was going to play in the Mecca; I said I was going to play in the Garden when I was a little kid. I didn’t get to do that. But I’m going to coach here.

“The history of the Knicks, I don’t take that lightly. I really take a lot of pride in that. I will carry that. I will roll up my sleeves and work really hard to rebuild this culture. It’s a great opportunity to build basketball success that will eventually pay off when we hold that [championship] trophy.”

Considering that franchise player Kristaps Porzingis is recovering from a torn ACL and might not even play next season, patience with the building process will be a necessity. But when Porzingis is healthy, Fizdale made it clear he will be happy to build around a star who fits the modern style he wants to play unlike Gasol, who struggled to change his low-post style.

“He’s the future of the NBA,” Fizdale said of Porzingis. “You look at the teams that still are playing right now. They all have guys that are super-long, super-athletic, super-skilled, super- tough-minded, incredible workers. Obviously, I don’t know him personally yet, but he fits all the qualities of a megastar who can propel a franchise forward.”

Asked when he plans to visit Porzingis in Latvia, Fizdale quipped, “The plane is warming up.”

As for the fate of Joakim Noah, who was exiled from the team after a dispute with former coach Jeff Hornacek, Fizdale said they already had spoken and the door is open to a return.

The real work for Fizdale starts on Day Two, but he expressed belief in himself to handle the pressures of the Garden cauldron. “The biggest challenge is the expectation from fans and media,” Fizdale said. “That’s part of the fun. I love that. I’ve never been afraid. I’m really looking forward to this challenge.”