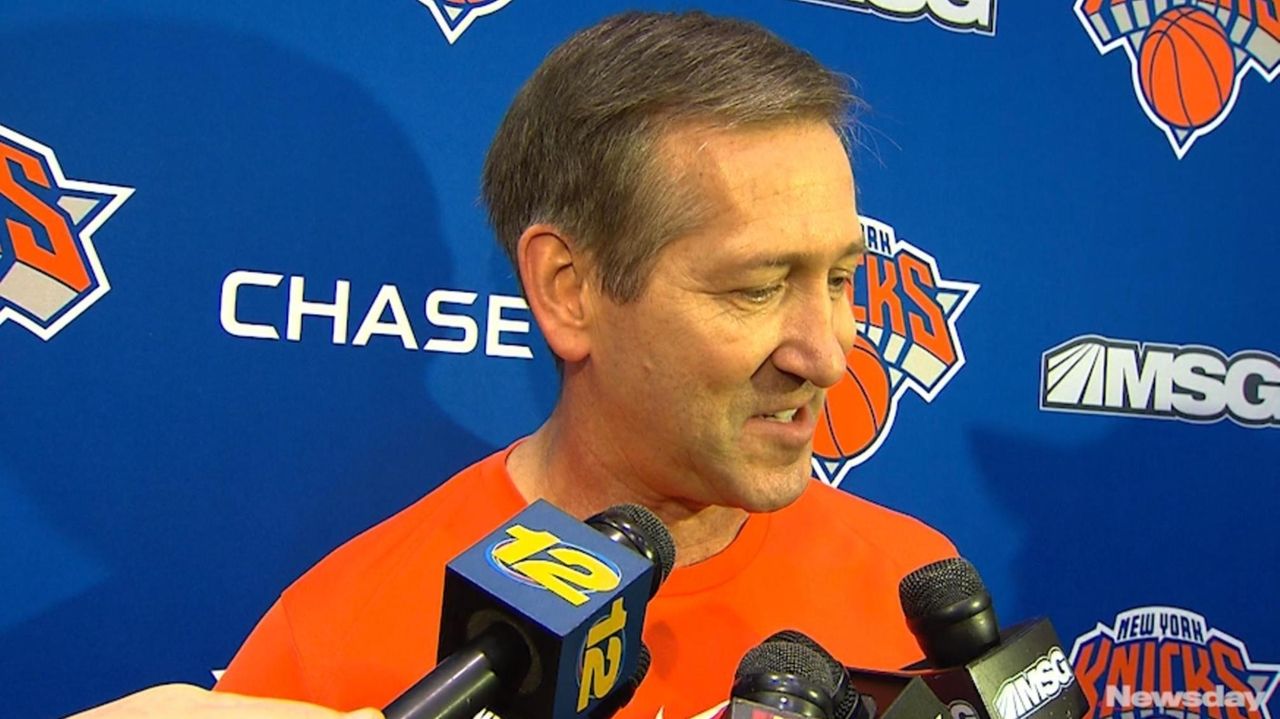 On Wednesday, February 7, 2018 Knicks players reflect on the injury to their teammate  Kristaps Porzingis, who was described as "devastated" when doctors told him he had a torn left anterior cruciate ligament Tuesday night.

TORONTO — Kristaps Porzingis was described as “devastated” when doctors told him he had a torn left anterior cruciate ligament Tuesday night. But those who spoke to Porzingis said he already has begun the recovery process, mentally at least.

Surgery hasn’t been scheduled yet and there is no timetable for when Porzingis will return. But Knicks general manager Scott Perry was impressed with Porzingis’ approach to this major injury and believes he will more than rise to the challenge facing him.

“We’re very confident in the things he talked about last night,” Perry said Wednesday afternoon “He’ll be ready to attack his rehab in the way he attacked the summer in terms of trying to improve his game. Youth will be on his side in terms of his ability to heal and fight through this and come back bigger, better and stronger.”

Porzingis, 22, suffered the injury early in the second quarter of the Knicks’ 103-89 loss to the Bucks Tuesday night. He dunked over Giannis Antetokounmpo, landed awkwardly and then crumpled to the Madison Square Garden court, clutching the back of his left knee.

An MRI revealed he tore his ACL and his season was over.

“Obviously, he’s devastated that he has that injury,” coach Jeff Hornacek said. “So are we. It’s a tough thing to have happen. He’s had such a great year.”

Perry said he expects Porzingis to have surgery “sooner rather than later.” But he’s not ready to put a timetable on it. Every player is different. But the rehab and recovery is a long process.

NBA players who have torn their ACL in the last five years have been sidelined from ninth to 20 months. It’s possible Porzingis won’t be back until 2019.

“We have tremendous confidence in our medical group here that he’s going to make more than a full recovery,” Perry said. “So whenever that time is, when he’s back on the court, we expect him to be back at full strength and better than ever. That was our message to him. And that’s his message to us.”

The 7-3 Latvian was enjoying the best season of his three-year career and was set to play in his first All-Star Game on February 18 in Los Angeles. Porzingis said it was his “dream come true” to make the All-Star team. He ended up averaging a team-best 22.7 points and an NBA-leading 2.38 blocks in 48 games.

“He was down when he first got the news,” said Courtney Lee, who spoke to Porzingis Wednesday night. “But then he instantly switched to like, ‘I’ve got to take on this new journey. I’m ready for it.’”

Perry said this doesn’t change his outlook, and he will do everything he can to make sure the Knicks are a better team when Porzingis is able to rejoin them.

“It’s not going to deter us from what we’ve been trying to accomplish since we got here,” Perry said. “We got to keep trying to build this basketball team, build the culture.

“Our goal is to have this team in a better position for when he’s able to return to the court, so he returns to a group that’s more cohesive and stronger and hopefully a little more talented. We’ll be able to move forward from that point.”

Perry made a move Wednesday, trading Willy Hernangomez to Charlotte for Johnny O’Bryant and second-round picks in 2020 and 2021. Perry said O’Bryant will be waived. Perry could try to make more deals by Thursday’s 3 p.m. trade deadline.

The chances of the Knicks making the playoffs already were slim, and now they appear to be microscopic without their best player. Perry said there is now “an opportunity for a lot of younger players to get out there and show what they can do.” That should mean more minutes for rookie point guard Frank Ntilikina and guard Trey Burke.

Perry also said he isn’t contemplating a coaching move with the Knicks, losers of four straight, sitting a season-worst nine games below .500 at 23-32.

“No, we’re not looking to make any changes,” Perry said. “We’re evaluating through the entire season. Jeff and his group are working really hard with this basketball team, doing the very best they can. Obviously, it’s adversity for them to deal with with KP being out.

“But I think they’ll be able to do a good job at keeping this team playing hard, playing together, and that’s what we’ll be looking at moving forward.”

Notes & quotes: Enes Kanter underwent surgery on his mouth and will not play Thursday in Toronto. Kanter previously had 18 stitches in his lip to close a cut, however, it reopened, so he underwent a procedure Wednesday . . . Ron Baker had arthroscopic shoulder stabilization surgery on his right shoulder. He’s expected to be ready for training camp.