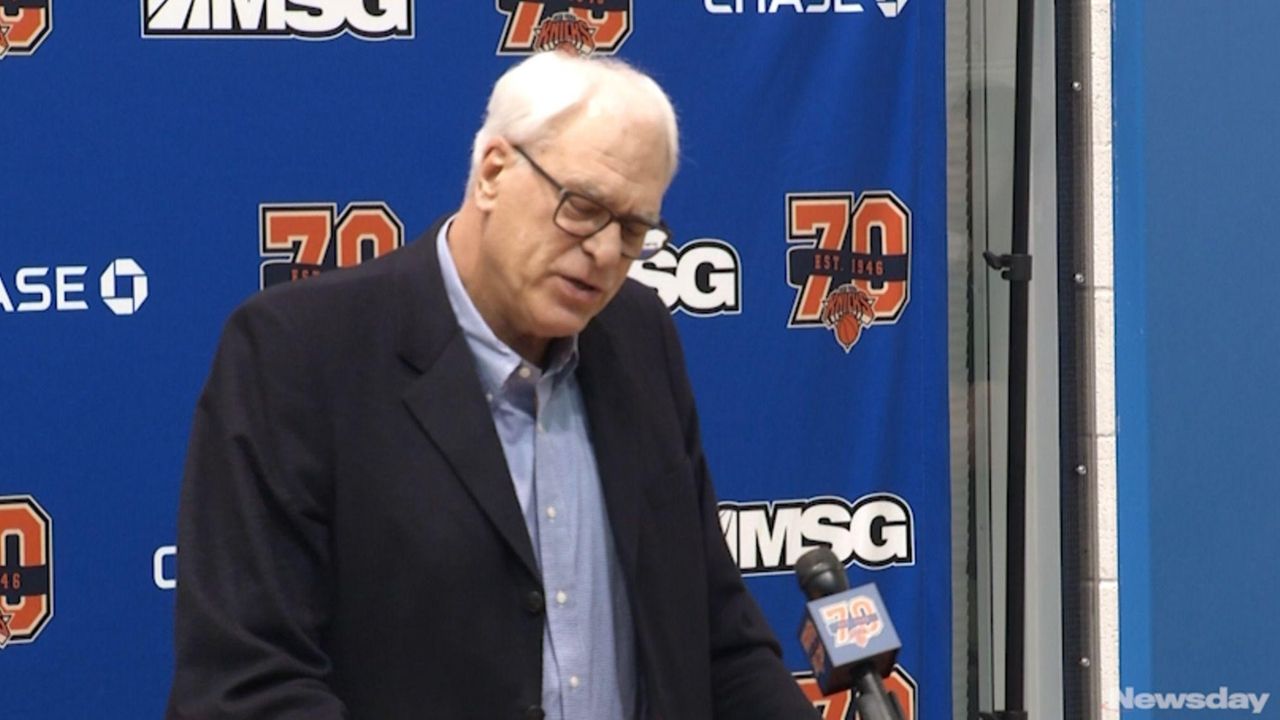 GREENBURGH, N.Y. — Phil Jackson said Friday that it would be better for Carmelo Anthony and the Knicks if Anthony were on a different team next season.

In a candid 49-minute news conference, the Knicks’ president made it clear that the team will explore trades for its best player, saying Anthony hasn’t had the impact Jackson hoped and that the Knicks want to get younger, more athletic and more versatile.

“We’ve not been able to win with him on the court,” Jackson said at the team’s practice facility. “I think the direction with our team is that he is a player that would be better off somewhere else and using his talents somewhere where he can win or chase that championship.

“Right now we need players that are really active, can play every single play defensively and offensively. That’s really important for us. We’re starting to get some players on the court who can do that. That’s the direction we have to go.”

This was the first time Jackson addressed reporters since Sept. 23, and he had plenty to cover after the Knicks went 31-51 — the team’s third straight season of at least 50 losses.

Besides talking about Anthony, Jackson spoke highly of guard Ron Baker and sounded as if he’s considering bringing back point guard Derrick Rose, who will be a free agent. Jackson also said Kristaps Porzingis isn’t ready to be “The Man.”

Jackson, who confirmed that he and the Knicks picked up their mutual options for the final two years on his five-year contract, also said the triangle offense is here to stay. He said the Knicks have to have a system that defines them, adding that the triangle hasn’t worked because of “resistance,” indicating that Anthony was a main culprit.

After Jackson spoke, Anthony posted on Instagram and Twitter a photo of Leonardo DiCaprio from “The Great Gatsby” and wrote “REALLY” with two “crying laughing” emojis and his trademark “#Stay Me7o”.

Among the people who “liked” Anthony’s post were Porzingis, LeBron James, Chris Paul and Dwyane Wade.

The Knicks are 80-166 in three full seasons under Jackson. who said he expressed to Anthony during their exit interview on Thursday that he should be playing for a winning team. Jackson acknowledged that the Knicks are “rebuilding” and probably won’t be contending soon.

Anthony has a no-trade clause in the five-year, $124-million deal he and Jackson agreed on in 2014. Anthony has said he wanted to stay with the Knicks, but it’s hard to imagine he would want to return now.

“I just said, ‘We haven’t won here,’ ” Jackson said. “ ‘You don’t want to end up your career not winning. This is not something you want to have labeled on your career. You want to get to that territory where you have a chance to win.’

“We talked about how we could make things the best possible things for both of us.’’

Jackson said the meeting was “cordial” and that the no-trade clause wasn’t mentioned. But he did say that Anthony had been “amenable” to a deal with certain teams before the trade deadline, an indication that he was willing to waive his no-trade clause.

Jackson said he doesn’t know the market yet for Anthony, who has two years and $54 million remaining on his contract. Jackson said the Knicks “want a significant player” in return, adding that any playoff team that doesn’t win the title might look to shake things up. The Clippers and Cavaliers are two of the teams the Knicks spoke to before the deadline.

“This guy plays 34 minutes a game,” Jackson said. “That’s a big hole to fill. We want a significant player that could hopefully fill that role. But that’s still to be determined. That’s a long way off.”

When Jackson was asked if Anthony could return, he gave a cryptic answer.

“That’s a long way down the road,” he said. “There are very few options at that level, but there are options.”

Jackson said he communicated with Anthony during the season after it became public that the Knicks were considering trading him, and after he said in an interview with CBSSports Network that Anthony holds the ball too much. Jackson said Friday that wasn’t a criticism but “pure fact.”

“Carmelo’s been great,” Jackson said. “It’s just who he is. He’s an elite scorer. He carried the basic load for this team. I thought he stood up well this year in a lot of tough situations. I can’t regret it. I can’t go back and regret that. Obviously, it hasn’t worked out, this partnership together. Somehow or another, it didn’t click here with this team.”

Knicks players under contract for 2017-18

What the Knicks hope to get for Carmelo Anthony

Ideally, they would get a starter and draft picks, including a first-rounder. But it’s hard to get equal value for an aging star who has a no-trade clause and will go only to certain teams. (It may require a third team).

Team president Phil Jackson said the Knicks “want a significant player” in return. They have to hope a playoff team gets ousted early and wants to make a major shakeup. Some possibilities:

Kevin Love: The Knicks spoke to the Cavaliers before the deadline. If they don’t win a championship, Anthony’s pal LeBron James may push for his buddy to join him.

Blake Griffin: He will be a free agent, and the Clippers probably will need to do something because they’re not expected to win the title. Chris Paul is Anthony’s closest friend in the NBA.

Jae Crowder: The Celtics will first see if they can get Gordon Hayward or Love. More would have to come back, but Boston could be an option for Anthony.

Otto Porter: Anthony, a Baltimore native, would be moving close to home if the Wizards could put together a package to acquire him.

Victor Oladipo: Russell Westbrook needs help in Oklahoma City. That market may be too small for Anthony, but he could help them win.

Chris Bosh: His salary and a young player for Anthony, who might be willing to go to Miami if Dwyane Wade leaves Chicago and goes back to Miami.

Nets can't stop Russell, Towns and fall to Timberwolves
Kreider battling for goal supremacy with Ovechkin
Gillies' philanthropy, kinship with Isles' alumni will live forever
Giants interview Bengals DC Lou Anarumo for head coach job
Trottier: Gillies was a strong singer, joke-teller and had 'a caring heart'
Irving, Harden find the right chemistry together without KD
Didn’t find what you were looking for?