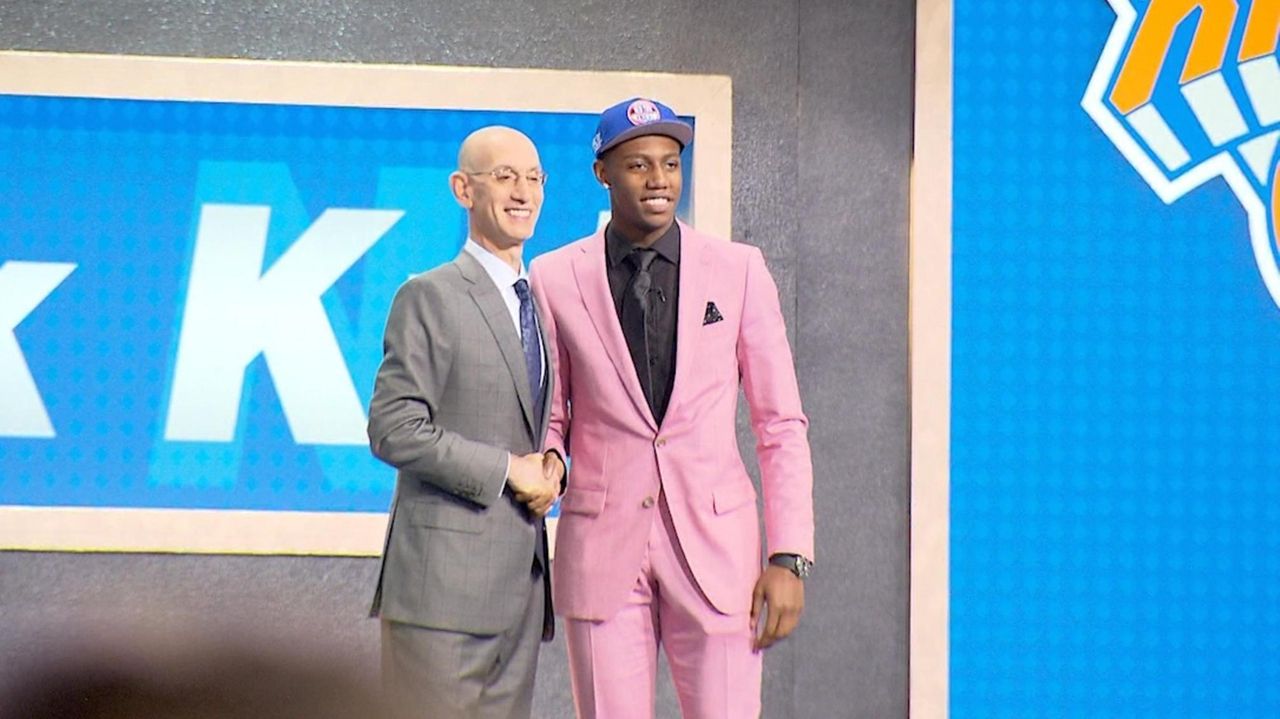 The Knicks selected Duke's RJ Barrett with the No. 3 overall pick in the NBA Draft on Thursday at Barclays Center. Credit: News 12 Long Island

If there has been one consistent thread throughout the Knicks’ long run of struggles, it has been the skepticism of the too-many-times-to-count- burned fan base. Draft night has been a time for letdowns and occasionally tears.

But when NBA commissioner Adam Silver announced the Knicks’ selection of RJ Barrett on Thursday night, there were cheers from the crowd at Barclays Center — Spike Lee stood and applauded — and there were more cheers when he crossed the stage and provided his first words.

He promised Wednesday that he would cry but that you wouldn’t see him cry. But when the moment came, he put his head on his father’s shoulder and couldn’t hide the tears.

“Yeah, even before I got picked, I was trying not to just let it come out,” said Barrett, who was a Naismith Award finalist in his one season at Duke. “I feel like I’ve worked so hard my whole life and just for this day to come, and now that it’s here and to hear my name called and walk across that stage, I just had to let it out.”

Of the crowd’s reaction, he said, “That was great. I’m glad that the city wants me here as much as I want to be here.”

Very few of the Knicks’ plans come to fruition. But on Thursday, one of the plans that was penciled in long ago was realized when their time to pick in the NBA Draft came and Barrett was on the board.

There was no hesitation, the pick solidified in their plans almost as soon as the lottery dropped them to the third spot.

“He’s been high on our board the entire season,” general manager Scott Perry said. “I think we had mentioned to you guys earlier that we wanted to stay in the top three in this lottery. We felt that there were three players that showed separation, with RJ being one of them. We’re just excited that he was there.

“When we bought him in and spent time with him . . . he is an outstanding character guy, too, not just on the basketball floor. He doesn’t just have basketball character. He has off-the-floor character as well. So he’s going to be a great representative for us.”

In the hours before the draft, the best-laid plans were thrown into chaos as the No. 4 and 6 picks were swapped out. But the rumors of the Grizzlies trading out of the No. 2 spot for a team seeking Barrett never materialized.

“Didn’t have a lot of concern that someone was going to get up to No. 2, because I think from our intel, Memphis was pretty locked into their pick [Ja Morant], so I didn’t think that they’d be moving it,” Perry said. “We had a couple phone calls in and around [our pick]. But we felt good in sticking with our plan of growing and developing and drafting well. We thought being the No. 3 position gave us a chance to draft who we felt had the most upside as a basketball player and who best fit our culture that we’re trying to build and establish here.”

Barrett was the No. 1 prospect coming into the collegiate season, and while he was surpassed by teammate Zion Williamson and the emergence of Morant, he still excelled. He averaged 22.6 points, setting an ACC freshman record and was the USA Today National Player of the Year.

After a league-worst 17-65 record — and with five of their rotation players from last season now free agents — the Knicks needed everything, so the intent was to grab the best available player. Barrett fit that bill.

Barrett was open about his desire to play his home games at Madison Square Garden. His father, Rowan, played at St. John’s and his mother, Kesha, ran track there after growing up in Brooklyn. He spoke of his late grandfather being a huge Knicks fan and watching games with him as a child.

“That was crazy,” Barrett said. “That was one of the reasons why I was crying, because we used to watch the Knicks growing up and he would always tell me I was going to be a Knick. I’m sad he can’t be here to see it. But I’m just very happy, man.

“ . . . What do I say? I’m so overwhelmed, humbled and just honored and very thankful that the Knicks took the chance with me, that they believed in me. I’m so happy to be a Knick, and I can’t wait to play in Madison Square Garden.”

Knicks take Brazdeikis. The Knicks dealt the 55th pick to the Kings along with cash considerations to move up eight spots to 47 and select Michigan’s Ignas Brazdeikis. The 6-7 small forward led the Wolverines in scoring with 14.8 points per game.

Comment: As good as it could get for the Knicks once they fell in the lottery, landing the player who was the top-ranked prospect heading into the 2018-19 NCAA season. A dangerous scorer who is smart and strong, and at just 19 years old has a world of potential.

The Knicks took the Duke swingman with the No. 3 overall pick in the 2019 NBA Draft.