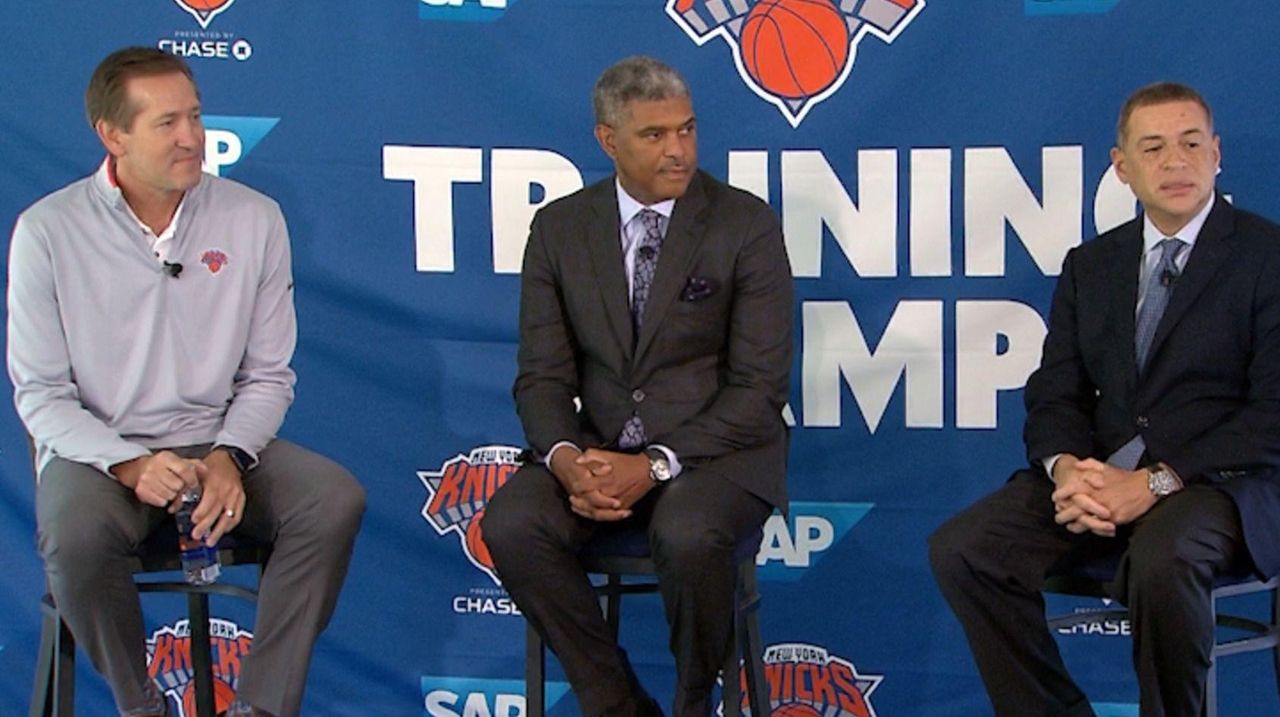 Knicks president Steve Mills said he expects Carmelo Anthony to be with the Knicks when training camp starts next week, and coach Jeff Hornacek said the perennial All-Star would remain a starter. Mills, Hornacek and GM Scott Perry spoke at a news conference  at the team's practice facility in Westchester on Sept. 22, 2017. Credit: News 12 Westchester

GREENBURGH, N.Y. — Carmelo Anthony has expanded the list of teams for which he would waive his no-trade clause from one to three, according to an NBA source.

The Knicks have been informed that Anthony would accept a trade to the Rockets, Cavaliers or Thunder, the league source said last night. Until this development, the Rockets were the only team on Anthony’s list, handcuffing the Knicks from making a deal.

Because they hadn’t been able to reach an accord with Houston — Anthony’s preferred destination — the Knicks asked him to provide more teams so they would have more options.

Anthony wants a change of address, and to play for a contender, while the Knicks want to move on and begin a youth movement built around Kristaps Porzingis, Willy Hernangomez, Tim Hardaway Jr., Frank Ntilikina and Ron Baker. It’s hard to do that if Anthony is still in the picture.

But Knicks president Steve Mills said at a news conference Friday morning that “our plan” is that Anthony will be with the team when camp opens Tuesday.

Coach Jeff Hornacek said if Anthony stays with the Knicks, the perennial All-Star will remain a starter. “The role’s not going to change,” he said. “We’re going to implement certain plays, certain defensive schemes that he’s going to be asked to do. But if you think I’m not going to start him, you’re crazy. He’s a great player. He still is. He’s going to lend a lot to our team. For us, we’re assuming he’s back.”

The Daily News reported that the Knicks recently reached out to the Cavaliers. ESPN.com first reported that Anthony would be amenable to a trade to Cleveland or Oklahoma City if nothing can get done with Houston. It’s clear that both sides would like this matter settled before media day on Monday.

General manager Scott Perry didn’t rule out something happening. “You always keep an open mind,” he said. “Part of my job is to help this team get better in any way that we can. So we’re going to continue to do that on a daily basis.”

Perry said he met with Anthony shortly after being hired and that it was understood that he could be back. Mills and Hornacek also have met with Anthony, who has been training and playing pickup games in Manhattan with current and former Knicks as well as other NBA stars. Anthony has not been a part of the optional workouts or games at the Knicks’ facility.

“Look, Carmelo’s going to be back here,” Perry said. “Carmelo has always been a professional. That’s one thing I’ve always respected about him. I think he can set a good example for the young players. He’s been a 10-time All-Star. If he’s back here with the Knicks, we expect him to be the professional he’s always exemplified throughout his career and move forward with him.”

Mills and Perry wrote blog posts about the future on the team’s website. Anthony wasn’t mentioned in either, but now the Knicks are saying he can help their young players if he stays.

“What we were trying to do is demonstrate to our fans what the long-term plan for the Knicks is going to be,” Mills said. “That’s why we focused on the young players because that’s what our future is and this is the long-term project that the three of us are embarking upon.”

Said Hornacek, “The coaches have been planning all summer on the offensive side, defensive side, what we like to do. Carmelo, all summer long when we were going through this stuff, we had him in mind moving forward. For us, we’re assuming he’s back.”

0:30
Isles raise the banners to the UBS Arena rafters
Excited Knicks expect frenzied crowd at Madison Square Garden
Aaron Boone to return as Yankees manager
Boone wanted to stay on as Yankees manager
Lennon: Will Steinbrenner open checkbook in pursuit of title?
Harden wants to stay with Nets but looks to test free agency
Didn’t find what you were looking for?