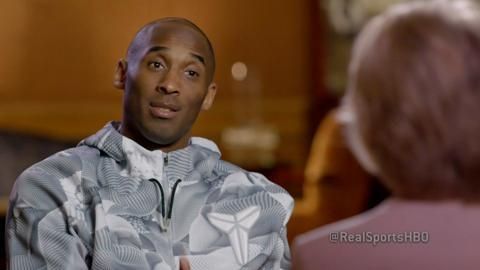 Kobe Bryant talks with Andrea Kremer about his final NBA season and his plans for life beyond basketball on the Feb. 23 edition of HBO's "Real Sports."

These are all words others have used to describe Kobe Bryant, according to Andrea Kremer in the latest edition of HBO’s “Real Sports,” which airs at 10 p.m. Tuesday.

“Why are you laughing?” Kramer asked.

“’Cause they’re all true,” Bryant said.

Bryant also said he once hung his 2008 Olympic gold medal in Pau Gasol’s locker on the first day of practice for the Lakers ahead of the 2008-09 season. The Lakers had lost to the Celtics in the NBA Finals the previous season, and Gasol played for Spain, who lost to the U.S. in the 2008 gold medal game.

“And did it work?” Kremer asked.

“Well, we won back-to-back championships,” Bryant said, “so it had something to do with it I guess.”