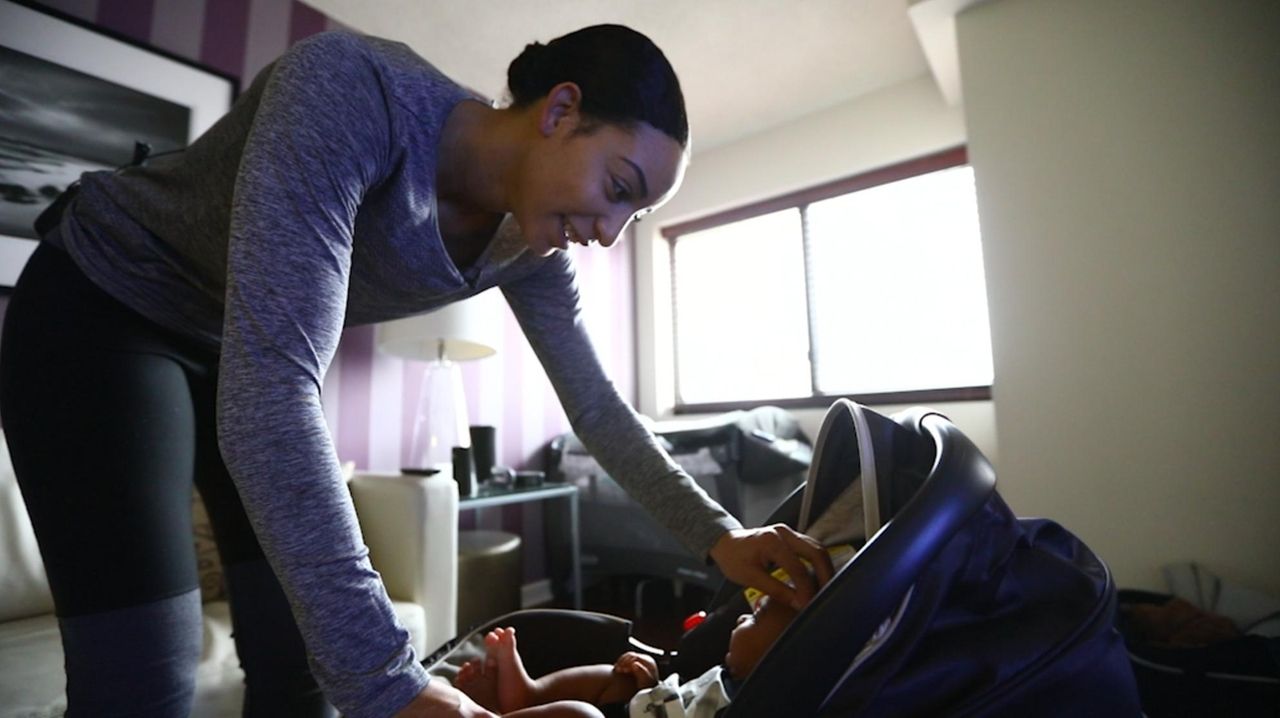 January 2017 was a busy month for WNBA guard and North Babylon native Bria Hartley.  She gave birth to her first child, Bryson, and changed zip codes after being traded from the Washington Mystics to the New York Liberty. Hartley, who starred in college at UConn, discusses how she balances the demands of motherhood with the rigors of being a professional athlete. Credit: Newsday / Jeffrey Basinger, Barbara Barker

There was a period, in Long Island basketball circles, where the day’s conversations seemed to center solely on Bria Hartley. There was the time she scored 43 points in a playoff game for North Babylon, including a wicked crossover that sent a defender sprawling some six feet, and made the entire crowd gasp. There was the other time, when she scored 51, and just nearly singlehandedly won the Suffolk championship.

She succeeded there and in college with Geno Auriemma’s Connecticut Huskies, but that same high level of success has eluded her on the professional level. Then again, she’s never had this: The chance to call Madison Square Garden home, or to play for the team she’s been rooting for since she was a little girl.

In many ways, Hartley’s acquisition — part of a three-team trade that sent fan favorite Carolyn Swords to the Seattle Storm and brought the 5-8 guard and Kia Vaughn back to New York — is an indication of where the Liberty hopes to be headed this year. They’re led by former MVP Tina Charles, but are an exceptionally deep team beside her, especially in the guard position. A perennial defensive powerhouse, coach Bill Laimbeer said last week that the team will to play a little more to its current strengths; defense is still the primary focus, but not the only one. Additionally, given that point guard Tanisha Wright is taking the year off, their offense will have a different look. The hope is that all these factors will finally net the Liberty its first championship.

“We have three guards that can push the ball and shoot and get up and down and attack and that’s going to be a little bit of a changing style that we’re going to have this year, utilizing those skills,” Laimbeer said. “We’re going to push the pace. We’re not going to be a run and gun team . . . but I expect us to be toward the top in pace of play this year.”

The Liberty, which was 21-13 last year before losing in a one-game elimination in the playoffs, had the third-best pace in the WNBA in 2016 but the second-worst offensive rating in the league, courtesy, in part, of an 18-percent turnover percentage. Tina Charles, though, said she didn’t believe that picking up the pace more would necessarily lead to more turnovers.

“You want to control the things that you can control and that’s turnovers,” she said. “We have much more experience. We have a lot of years under our belt. A bunch of us have been at the playoffs. We know what it feels like to lose, so we want to get that winning feeling.”

Charles pointed to the addition of Hartley as one of the keys to this offense, but even more particularly the return of guard Epiphanny Prince, who missed last year with a torn ACL.

“I think that more than anything, just being able to have [Prince] at the start of the season, that’s going to help us tremendously,” Charles said. “She’s a great shooter . . . Just having [the guards] fill in the lanes [will help] . . . We’re definitely looking for easy transition points. If you don’t have to set up an offense, why do that?”

The Liberty will also look to Brittany Boyd, who filled in admirably in Prince’s absence but is still a little green, as well as sharp shooter Sugar Rodgers to carry some of the offensive load. In addition, Charles will continue to develop the three-point shot that became a bigger part of her game last year. She’s also working on finishing more with her left hand.

And then, of course, there’s the Long Island product. Though Hartley only gave birth to her son at the beginning of the year, she was back in the gym by March, she said. After starting only five games in the last two seasons, she’s ready to break out for the team she grew up rooting for. Harley’s still got that crossover, and she can be a menace on the court, even seven years removed from high school.

“I have something to prove,” she said. “I didn’t get the minutes I necessarily expected in Washington but every time I’m out there, I play as hard as I can and I try to make the best of the opportunity, and that’s the same thing I’m going to do here. When these opportunities are given to me I’m going to go out there and make the most of it and hopefully make a statement.”

Best: Game 7 drama revolves around the fate of Kucherov
Popper: Resurgent Yanks have to beat Red Sox now
RBNY's Caden Clark signed by RB Leipzig, will move after MLS season
Was penalty missed on Mayfield's cross-check on Kucherov?
Yankees have everything in good working order in rout of Royals
1:30
Islanders fans looking forward to Game 7 vs. Lightning
Didn’t find what you were looking for?