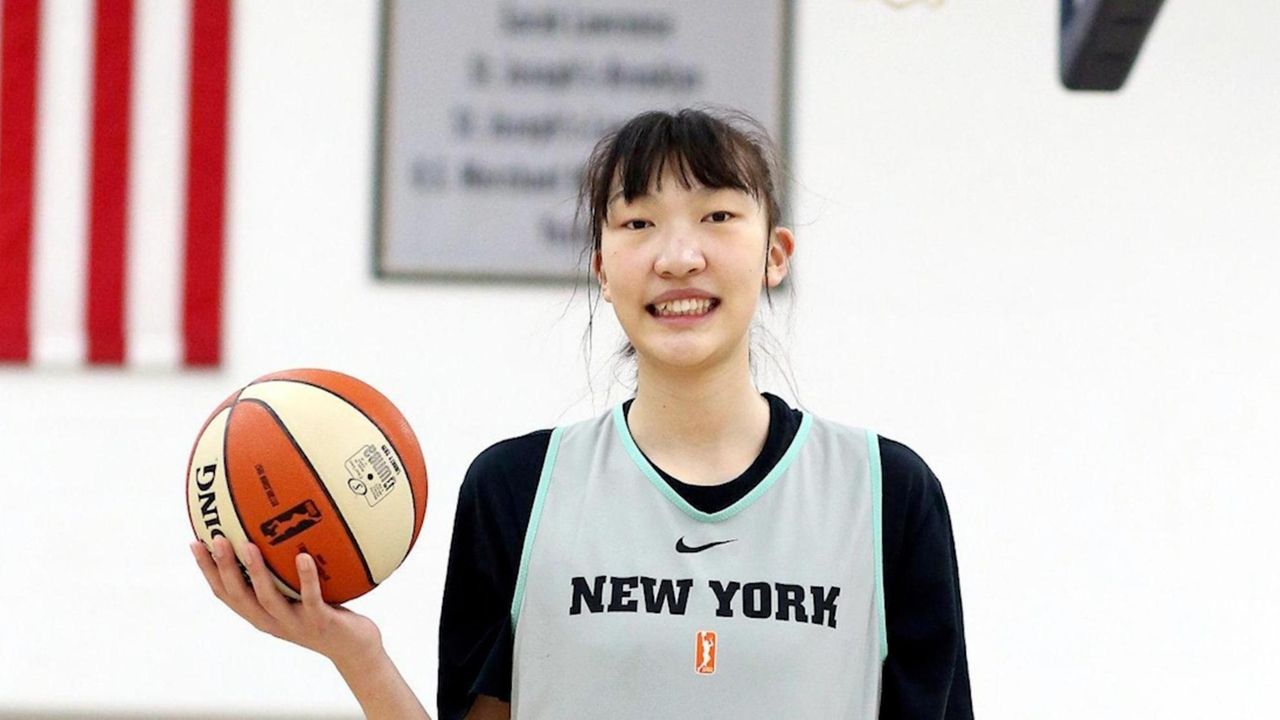 At 6-foot-9, Liberty rookie center Han Xu is the second tallest player in WNBA history and looking to make a huge impact this season. The second-round draft pick takes the court with the Liberty for the first time against her former team, the Chinese National Team, Thursday night at Barclays Center in Brooklyn. Credit: Patrick E. McCarthy

When Han Xu takes the court Thursday night at Barclays Center in Brooklyn, the 6-9 center will become the second-tallest player in WNBA history.

Talk about giant expectations. It’s fair to say that no second-round draft pick has entered the league with the fanfare, and accompanying pressure, that 19-year-old Han will face this season.

It’s not just her height that has people talking. The tallest player to play in the WNBA since 7-2 Margo Dydek, Han has the potential to become the first big-time female star from basketball-crazed China. And the Liberty are doing everything they can to take advantage of that.

To promote Thursday’s game against the Chinese National Team, Han’s former team, the Liberty took out a half-page advertisement in the Sing Tao Daily, New York’s biggest Chinese-language newspaper. Han is also featured in Liberty billboard advertisements in Chinese and English in Queens, Brooklyn and Manhattan.

For fans overseas, the team also has started its own Weibo account — Weibo is a micro-blogging platform like Twitter in China — that will inform a potential 600 million registered users about Han’s daily life in the league.

“We want to help her tell her story and grow the game of women’s basketball,” said Shana Stephenson, the Liberty’s vice president of marketing.

When Yao Ming came to the Houston Rockets in 2002, he spawned a generation of Asian NBA fans around the world. Now, it seems like everyone — including new Liberty owner Joe Tsai, who has publicly compared Han’s signing to Yao’s — believe that she can do the same for the WNBA.

It’s both high praise and heavy pressure when your new boss, a Taiwanese-Canadian billionaire, compares you to a Hall of Fame NBA center. Han, despite being the youngest player in the league this year, said she is ready for it.

“I am OK with the comparison and see it as an expectation that I have to meet,” Han said Monday after practice through a translator. “It is common to be compared [to Yao] because of my nationality and my height and being the second Chinese player drafted into the WNBA.”

Zhen Haixia was the first Chinese player drafted into the WNBA when she was taken by the Los Angeles Sparks in 1997, though three other Chinese players have seen time in the league. None, however, have had Han’s potential to make an impact.

Han is the first graduate of the NBA’s Academies program to be drafted by either the NBA or WNBA. The program, which has seven different sites around the world, including three in China, helps develop young international talent. Her participation made her known to a couple of teams, but where she really made an impact was at the FIBA Women’s World Cup last summer. Han scored 20 points in a loss to the U.S. team, which included current Liberty teammate Tina Charles.

“I had a chance to go to the World Cup and see Han and a couple of the Chinese folks,” Liberty coach Katie Smith said. “She really got on our radar then. It was a need for us at that position. She’s somebody who has some height and skill.”

The Liberty took Louisville guard Asia Durr with the No. 2 overall pick. They then drafted Han with the second pick in the second round (14th overall).

Although Durr is expected to contribute right away, Han likely will take some time adjusting to the physical level of play in the league.

“She’s a project in some areas, but she has the skills and motivation that you want someone to have,” Smith said. “This league is the best of the best and it’s a physical grind, so there will be a learning curve in learning how to function against these players and this skill set . . . Han is a worker. She wants to do this.”

The team is going to put Han on a training program to help her add some muscle to her relatively slender frame. They have also hired an interpreter, Hannah Rothkuo, who will be at all practices and on the bench with the team during games to help the staff communicate with Han.

Han has been working on her English, particularly her basketball terminology, and in a 10-minute interview attempted to answer some questions in English even though Rothkuo was there to help her. She also is slowly getting acclimated to her new surroundings off the court.

“I like pizza. Meat pizza,” she said with a laugh.

Liberty hopeful for future with new ownership groupThe uncertainty over the ownership of the Liberty cleared up in January when the investment ...

Randle scores 44 as Knicks top Mavs, win fifth straight
Yankees fall to 5-8, fans melt down in lackluster loss to Rays
Joe Harris, Kevin Durant lead way as Nets top Hornets
Dal Colle, Komarov back into Isles' lineup with others hurt
Isles again come up empty in Boston with shutout loss to Bruins
Knicks' Burks out Friday due to NBA health and safety protocols
Didn’t find what you were looking for?