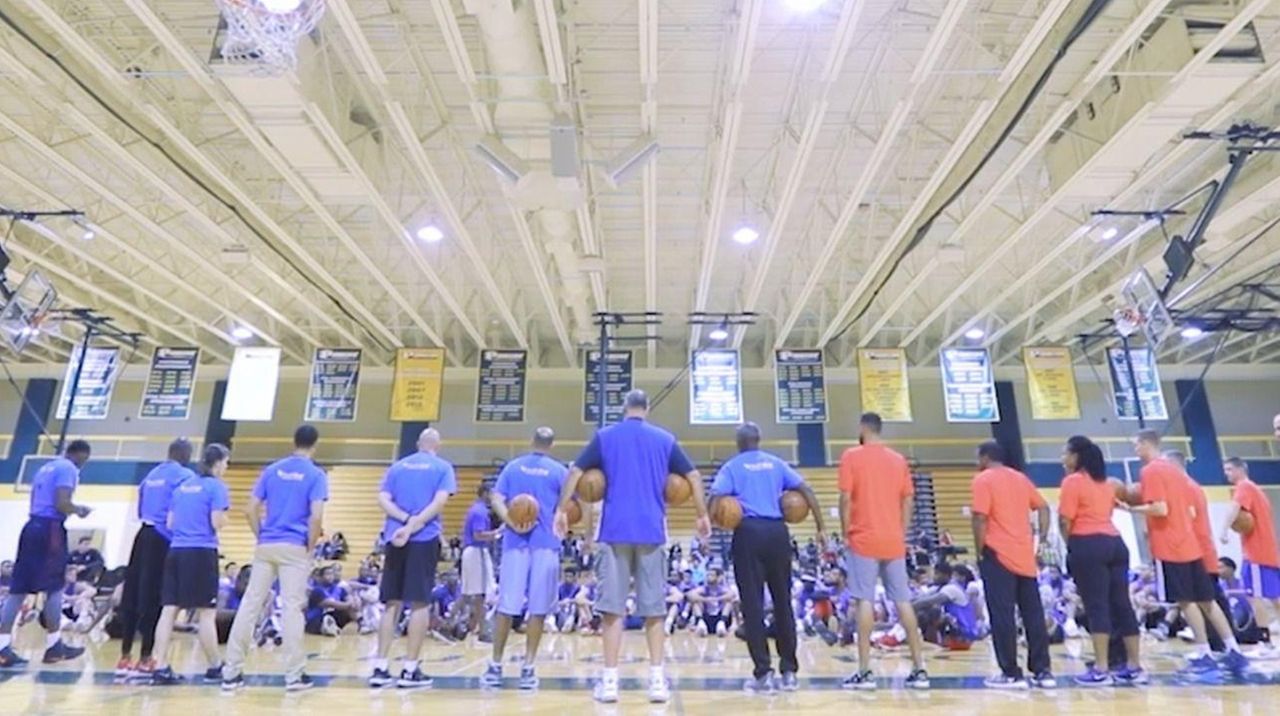 52-year-old Bobby Fanning of Huntington Station admitted it might be too late,  But just for fun, he tried out for the Long Island Nets basketball team on Sept. 30, 2017. Credit: Newsday / Raychel Brightman

Though the age range for Saturday’s Long Island Nets open tryout was 18 through 50, Fanning, who lives in Huntington Station and works in the radio industry, wanted to take a shot. So he received an exception to give it a go at LIU Post’s Pratt Center.

On the court were 114 other players, who, like Fanning, weren’t quite ready to let go of the game.

“It was something I’ve always wanted to do,” Fanning said as he worked out in hopes of earning a shot to play for the Brooklyn Nets’ G-League team. But Fanning said making the team wasn’t his priority.

“Self-gratification and accomplishment,” Fanning said of his goals. “I set out to do something, and I was a little hesitant at first . . . But you know what, you never lose touch of the game.”

On the court, Fanning tapped into his inner-point guard, the position he played in high school, finding his teammate for two backdoor layups. On each, Fanning was thanked for his generosity.

“I love that, when someone else can acknowledge ,” Fanning said. “Those are the things that the game is all about.”

While Fanning sought to accomplish a personal goal, others took the court with hopes of earning a living.

There were players with years of overseas professional experience looking to find their way onto an NBA roster. There were young, spry athletes, fresh out of college, searching for the spark to ignite their professional careers. And then there was Fanning, whose competitive basketball career ended in high school, but needed to itch a 25-year old scratch.

Isiah Stokley, 26, who played college basketball at Post, just completed his first professional season in Romania. While his time in Eastern Europe helped improve his game, the open tryout offered him an opportunity to fulfill his true aspirations.

“This is a shot at my dream,” Stokley said. “I’ve always had dreams of playing in the NBA. Romania was a great experience, but the G-League is a step closer to what I actually want to do.”

While Stokley viewed the tryout as a beginning to his journey, it may mark the end of the journey for Nick Carter.

A 2004 Whitman High School graduate, Carter played college basketball for Stony Brook and Post. Since graduating in 2009, he has spent the last eight years traveling to wherever he could find spot on a roster, playing in China, Italy and Canada.

After getting cut in Canada last year, the 31-year-old said he’s ready to settle down if his dreams don’t come true, hoping to coach high school basketball this winter.

Long Island Nets coach Ronald Nored made it clear what he’s looking for at the tryout.

“The biggest thing is to have guys who possess the skills to play in a game,” he said. “We play a game in a little over a month. We need guys that are ready now.”

And although Fanning said he didn’t expect to make the Nets roster, he left Post with lasting memories.

“It was just an overall exhilarating experience,” he said, “very satisfying.”

Popper: What's next for Nets after Game 7 ouster vs. Bucks?
Watch highlights from Nets-Bucks Game 7
Highlights: Isles hold on to win Game 4
Barker: Big 3 derailed by health and Nets' window could be closing
KD's 48 points not enough as Nets fall in OT to Bucks, losing Game 7 and series
Urshela stays in after freak play, hits go-ahead HR in Yanks' win over A's
Didn’t find what you were looking for?