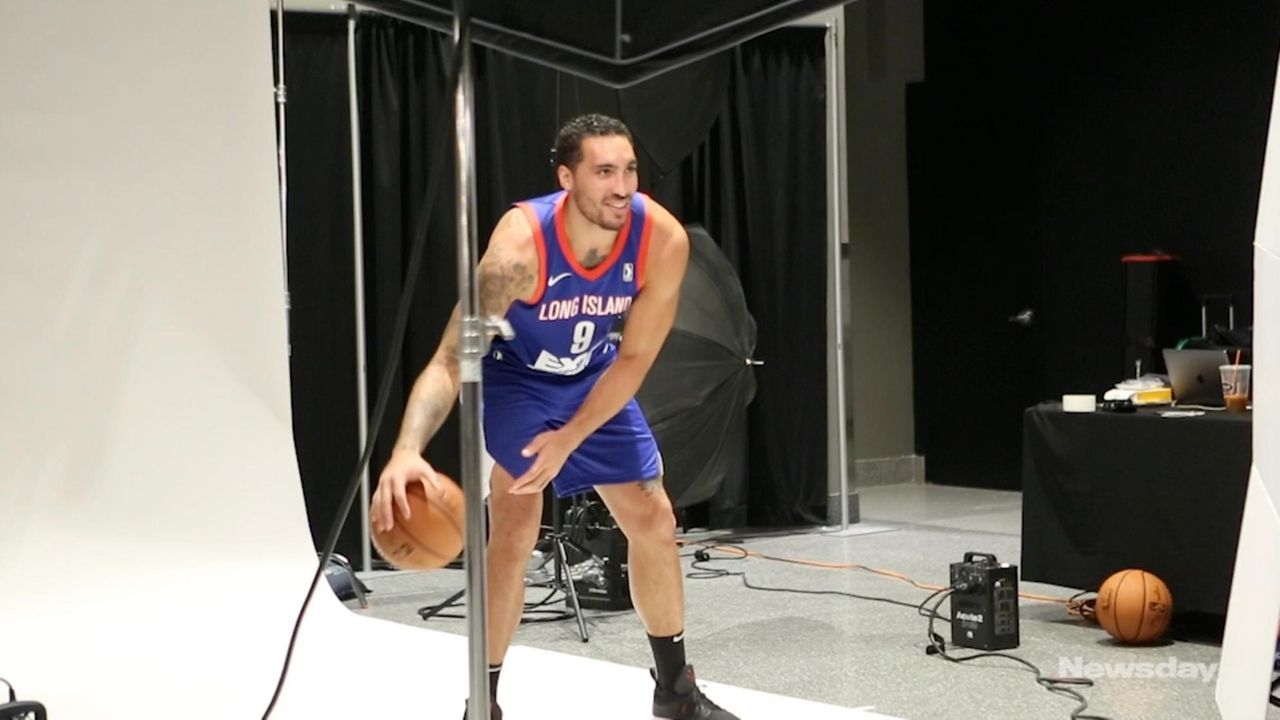 On Friday, October 26, 2018 the Long Island Nets hosted their media day ahead of the upcoming G League season. Included in attendance was coach Will Weaver and general manager Trajan Langdon, as well as forwards Ismael Sanogo and Drew Gordon.  Credit: Newsday / Ryan Gerbosi

Playing the game you love, and doing it close to home. It’s a golden opportunity for Ismael Sanogo out of Seton Hall University. The newest Long Island Nets rookie from Newark, New Jersey, made the G League team's roster as a “local tryout.”

“It’s wonderful,” Sanogo said. “I thank the older guys for this opportunity, without them I feel like I wouldn’t be here, and I thank Coach [Will] Weaver and the whole coaching staff.”

Sanogo, a 6-8 forward and the only player from tryouts to make the roster, seems to have passed his first few tests in his short time with first-year head coach Weaver.

“He just pops physically,” Weaver said. “Even on the way over here he’s asking can we watch some film, asking if we can sit on the bus tomorrow and go through some stuff, so I think that’s the right approach for any rookie."

Weaver preached the grit of the Brooklyn Nets organization, and how he’s trying to bring that down to their G League affiliate. Defensive play and effort can be a major factor in determining the grittiness of a team. If Sanogo's college career was any indication, he has the opportunity to give Long Island what it's looking for.

In 111 games for Seton Hall, Sanogo earned the reputation for being a defensive player. He finished 17th in Seton Hall history with 91 total blocks, including a career-high five in a game against Rutgers last season. Bringing that defensive mindset to the G League is the top priority for the rookie.

“Playing defense [is my strength], all the dirty and the gritty stuff,” Sanogo said. “I definitely want to be able to lock up the best player on the other team, I want to be that defensive stopper, and win the defensive player of the year.”

The 22-year-old credits the veterans on this Nets squad for him not only making the roster, but also helping him make the necessary adjustment with the new level of play that the G League presents.

Sanogo will have adjustments to make being a rookie in a new league, however, he’s tired of waiting around, and wants to get on the court.

“I’m just ready to play and win," Sanogo said. "Hopefully, bring Long Island back on the map, get some wins, make the playoffs and win a championship."

NYCFC moves into fourth with Castellanos' penalty in win over Fire
Barker: Harden not his usual unstoppable self this season
Nets get pushed around and beaten by Heat
LI's Wade out-grappled in PFL championship loss
0:25
Meet Monte, the Islanders' new guide dog friend
Signature moment for Giants' Pettis and his dad, an Astros coach
Didn’t find what you were looking for?