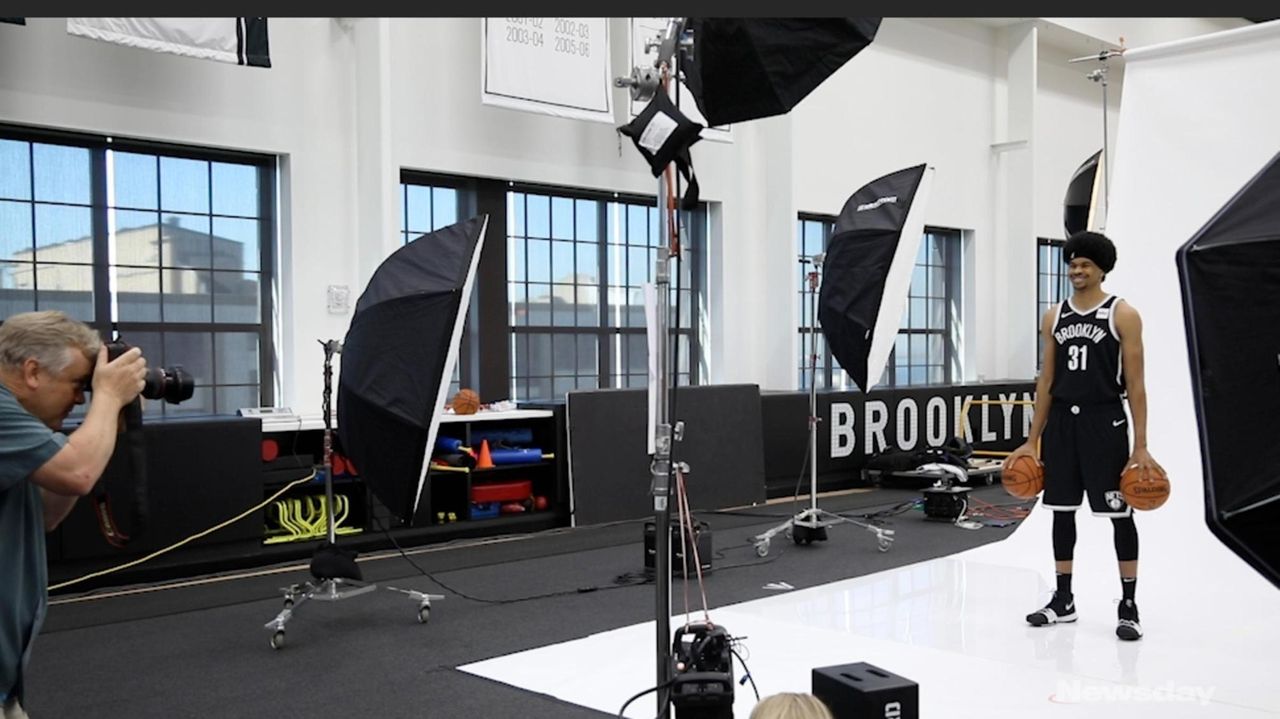 Kyrie Irving, Kevin Durant and DeAndre Jordan discuss some of the reasons they all came to the Brooklyn Nets in the offseason during their first time meeting with reporters at Nets Media Day on Sept. 27, 2019. Credit: Newsday / Shelby Knowles

As Kyrie Irving recalls it, the time was precisely 4:16 a.m. on the East Coast before NBA free agency opened later on June 30 when he, Kevin Durant and DeAndre Jordan all agreed via a conference call that they were Brooklyn-bound to cast their lot with the Nets.

Describing the moment for the first time in Friday’s media day session, Irving said he let the Nets “know my interest was very high and I had some other pieces I wanted to bring with me as well. This is the perfect place to do it…It was just a great, great feeling to know that I had the support of the front office and my teammates that I brought from other teams, teammates that I had to reach out to to really make this thing feel like home.”

But to hear Irving tell it, nothing was certain until that early-morning phone call.

“At 4:16 the morning of free agency, we still had no idea what we were doing,” Irving said. “We didn’t know the rules, we didn’t know what are the things we have to do to make this happen…We talked in detail that morning, and later that day, we just decided, hey, we’re doing this together and then formulate a plan around that. It basically just happened in the spur of the moment that day.”

Durant, who will miss all or most of the coming season while recovering from right Achilles surgery, said he reached the point where he was ready to leave the Warriors after winning two NBA titles, and the timing was right for him to join with good friends and a fast-improving organization. He gave “two seconds” thought to opportunities with the Knicks or the Clippers, but he liked what he saw from the Nets and coach Kenny Atkinson.

“It’s very rare that you get to this point and have a decision in front of us where we can control our destinies,” Durant said. “We sat down and talked about it and what basketball meant to us. I think this is the perfect spot for us to hone our skills and keep going. It was one of those things that just kind of happened organically.”

Jordan joked that Durant, a friend since their high school days, and Irving, who became a friend when they were on the 2016 U.S. Olympic team, “begged” him to join them. But like them, he admired the culture the Nets built in three years under general manager Sean Marks and Atkinson.

“We’ve talked about this for a long time,” Jordan said. “I feel like the universe kind of put it out there for us to take advantage of it. We were all free agents at the same time. So, it kind of worked itself out, and we’re really excited about this opportunity.

“Brooklyn was always a huge play, not only from the culture, but the guys they have here are extremely talented. We want to be part of something like this. We feel like this was the best fit.”

For Irving, especially, it’s a fresh start after two controversial seasons with the Celtics. He admitted being depressed following the death of his grandfather last season, adding, “I failed those guys in a sense that I didn’t give them everything I could have.”

But having grown up in New Jersey as a Nets fan and played at many parks in the area, Irving feels as though he is home now with his buddies in tow.

3 questions for the Nets heading into training campHere's what's facing the Nets as they enter the 2019-20 season with a roster that was drastically upgraded in free agency.