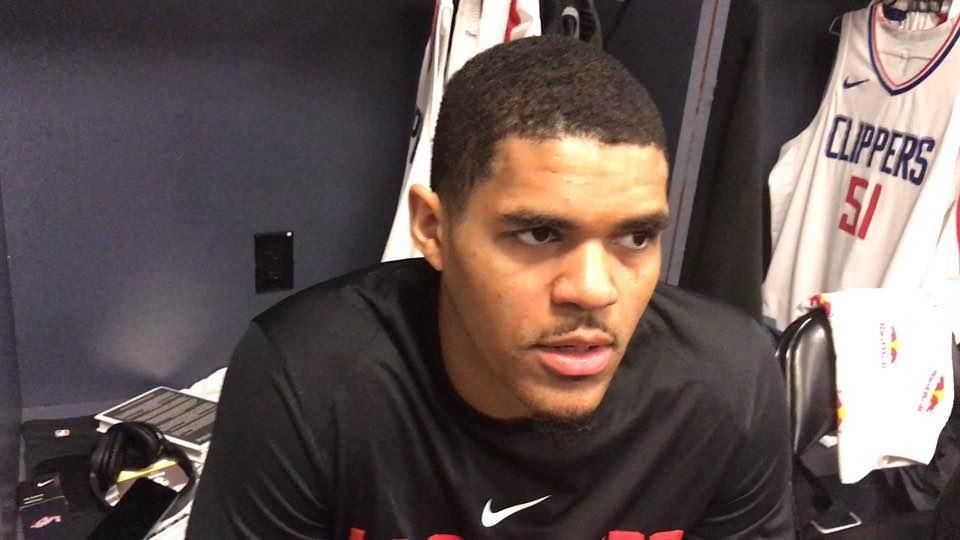 Tobias Harris, a Dix Hills native, spoke about his recent trade to the Los Angeles Clippers before playing the Nets at Barclays Center on Monday, Feb. 12, 2018. (Credit: Newsday / Kenny DeJohn)

Tobias Harris is in his seventh season in the NBA and already has been traded four times, but the former Half Hollow Hills West star said he’s never gotten used to changing area codes.

Harris, now a member of the Clippers after being traded by the Pistons in a deal for Blake Griffin and others on Jan. 29, said it’s difficult each time a player gets dealt.

“You don’t ever get used to the process,” he said before recording 10 points and eight rebounds in 33 minutes in Monday night’s 114-101 win over the Nets at Barclays Center. “No matter what the situation is, when you get traded, it still shocks you. But for me, it’s different in every situation — different teams, different goals.”

Playing in front of “a bunch of family,” Harris said he was motivated to perform well for them in his new uniform. He was shipped to L.A. along with Avery Bradley, Boban Marjanovic and draft picks in a blockbuster deal for Griffin, Willie Reed and Brice Johnson.

Being included in a trade for Griffin, a five-time All-Star, isn’t something Harris thinks about, he said. Instead, he looks to contribute. “I just look at the situation and opportunity and then what I can do to help this team reach the playoffs, and that’s the goal,” he said.

The Clippers are 29-26, a half-game behind the Pelicans for the final Western Conference playoff spot.Harris has transitioned seamlessly to his new team, posting numbers right in line with his season marks of 18.1 points per game (a career high) and 45.1 percent shooting from the field.

Drafted 19th overall by the Charlotte Bobcats in 2011, Harris has since made stops in Milwaukee, Orlando, Detroit and Los Angeles. He has assumed his usual role as a scorer with the Clippers and said he’s ready for the opportunity to be a focal point on offense.

“It’s been great. It’s a good group of guys, a terrific organization, so I’m happy to be a part of it,” said Harris, who was Newsday’s All-Long Island Player of the Year in 2010. “My role is to play my game, come out and be aggressive, help this team in any way possible. I’m a scorer, so put the ball in the basket. That’s been my biggest role since I came into the league.”

Harris, who is under contract through the 2018-19 season, has been living in hotels since the trade and said he doesn’t have a place of his own yet but will “probably have something wrapped up soon.”

“Obviously, when you get traded, you have to pack all your stuff up and get ready to head out,’’ he said, “so that’s all I was really focused on.”