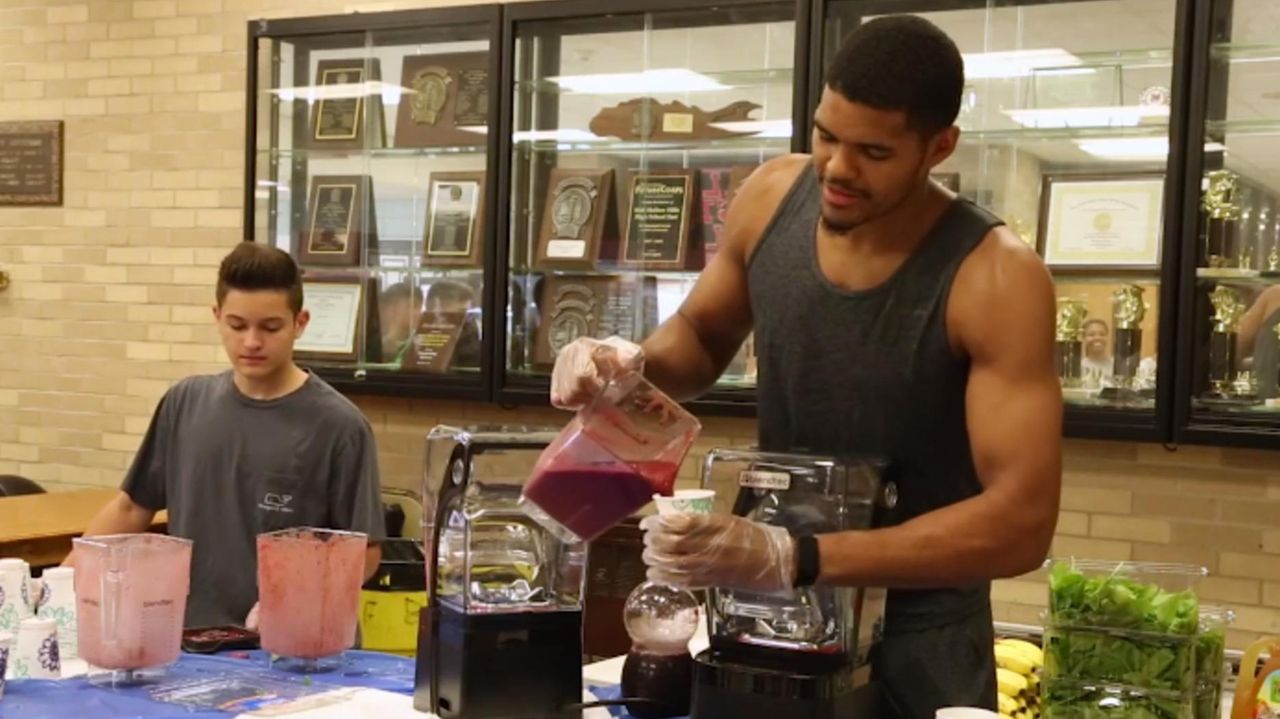 Campers at this summer’s Tobias Harris School of Business Basketball Camp are learning about more than just the intricacies of the crossover dribble and how to execute the pick-and-roll.

Harris, a graduate of Half Hollow Hills West and a forward on the Detroit Pistons, said his camp is structured around a different theme each year. So after he was done teaching young basketball players of all ages the correct way to shoot a jump shot, he went to the lobby of Half Hollow Hills East and spoke about how athletes should refuel in healthy ways.

“Health is wealth,” Harris said to the group.

Harris, a 6-9 veteran of six NBA seasons who averaged 16.1 points in 82 games for the Pistons in 2016-17, passed out small smoothies to each camper, some of whom came back for second helpings of what Harris called one of his favorite recipes.

In his seventh year running the camp with his family, he thought the older campers should learn the benefits of eating well.

“It took me a while to really tap into it,” Harris said of a proper diet. “I was always a healthy person getting out of college, but it probably wasn’t until my third year in the NBA until I really started to get on top of it.

Harris, who will turn 25 on July 15, said basketball is of equal focus during the camp. He laughed while explaining that “all the kids just want to shoot threes,” so he makes sure they get complete lessons in ballhandling, moving without the ball, defense and other aspects of the sport.

Sometimes the three-point line is taken out of play entirely, encouraging players to be more creative on offense.

“I’d say it’s where the game is at right now,” Harris said. “You put up a lot of points, definitely. As an NBA player, you have to adjust to that. But the kids have to understand the fundamentals of the game first.”

Players participate in a variety of drills in the first 90 minutes of camp before team bonding sessions that Harris said allow players to talk about anything they want, whether it be about basketball or life in general.

Then players participate in pickup games before a break for lunch. Another set of games is scheduled for after the lunch break.

“The kids always teach me that the energy is ever-flowing,” Harris said. “They come here, you see the smiles on their faces and you see how much they’re really able to be themselves and have fun here.”