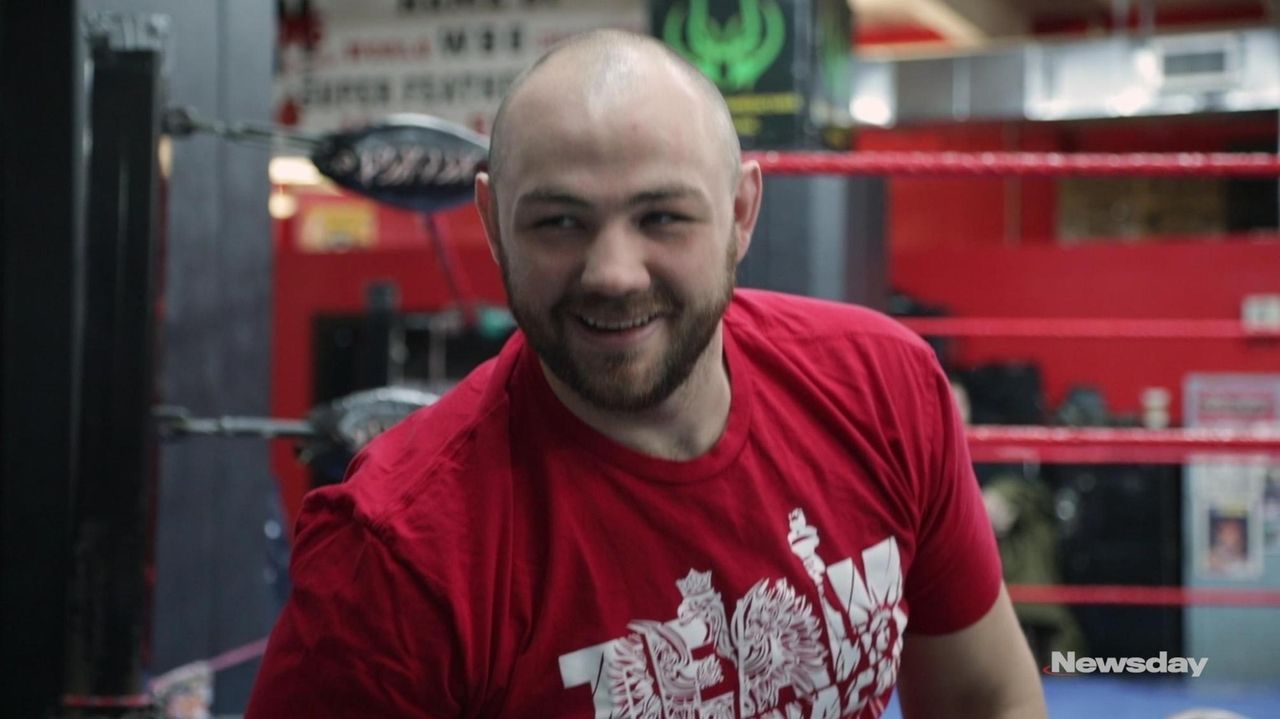 On Thursday, Jan. 17, rising heavyweight contender Adam Kownacki, who trains at Bellmore Kickboxing, and his trainer, Keith Trimble, talked about the importance of Kownacki's fight on Saturday at the Barclays Center in Brooklyn against former heavyweight contender Gerald Washington Credit: Newsday / Yeong-Ung Yang

There is an old saying that suggests looks can be deceiving.

In boxing, records can be deceiving too. The sport has been filled with fighters who have compiled records that numerically are impressive but too often were lacking in substance.

Kownacki is 18-0 and his last four opponents had a combined total of five losses. Until, that is, Kownacki beat each one of them. They included former IBF heavyweight champion Charles Martin and former world title challenger Artur Szpilka.

That can be viewed as risky strategy for a heavyweight who is ranked No. 5 by the IBF and No. 8 by the WBC. But Kownacki wouldn’t have it any other way.

Kownacki puts his ranking and unbeaten record on the line against Gerald Washington, another former title challenger, Saturday night at Barclays Center, The heavyweights are the co-main event, as Keith Thurman defends his WBA welterweight title against Josesito Lopez. Those bouts will be televised live on Fox beginning at 8 p.m.

“Usually, the first person they give us, I say, ‘yes,’“ said Kownacki’s trainer Keith Trimble. “I trust Adam and Adam trusts me. He has fought a lot of guys where the fight could have gone the other way. But at the end of the day, you want to test yourself against the best. Adam is old school. He always wants to fight the best.”

Kownacki, 29, was born in Poland and moved with his family to Brooklyn at the age of seven. He began boxing at Gleason’s Gym and won two New York Golden Gloves titles. After he turned pro in 2009, he began training with Kimble at the Bellmore Kickboxing Academy.

“Every fight keeps getting bigger and bigger,” said Kownacki, who has won 14 of 18 bouts by knockout. “I think I am very close to becoming heavyweight champion of the world. Beating Gerald Washington puts me a step closer to getting a world title shot.”

Washington, 19-2-1, already had his shot. In February of 2017, Washington challenged WBC champion Deontay Wilder but was stopped in the fifth round. A win over Kownacki could put him right back into the title picture.

"This is do or die, sink or swim,” Washington said Thursday at the promotion’s final news conference. “We have to look at every opportunity like that. I've done everything in my power to prepare for this fight.”

At 6-6, Washington will have three inches in height and six inches in reach over Kownacki. That suits Kownacki’s aggressive style just fine. But Trimble says fighting such good opposition has helped Adam learn that there is more to the sport than just being a bull.

“There are not many guys who can handle Adam’s pressure,” said Trimble. “But over the years Adam has developed into a boxer as well, he uses his jab very well. There are a lot of guys with padded records after 20 fights and then fall apart the first time they are in a real fight. That’s not Adam. He’s been tested.”

Bill Parcells once coined a phrase during his Hall of Fame NFL coaching career: “You are what your record says you are."

That may not always be the case in boxing.

“I think my resume speaks for itself,” Kownacki said.

Joe Harris, Kevin Durant lead way as Nets top Hornets
Dal Colle, Komarov back into Isles' lineup with others hurt
Isles again come up empty in Boston with shutout loss to Bruins
Mets snowed out in Colorado
Cohen responds to another report of Mets' poor workplace environment
Yankees fall to 5-8, fans melt down in lackluster loss to Rays
Didn’t find what you were looking for?