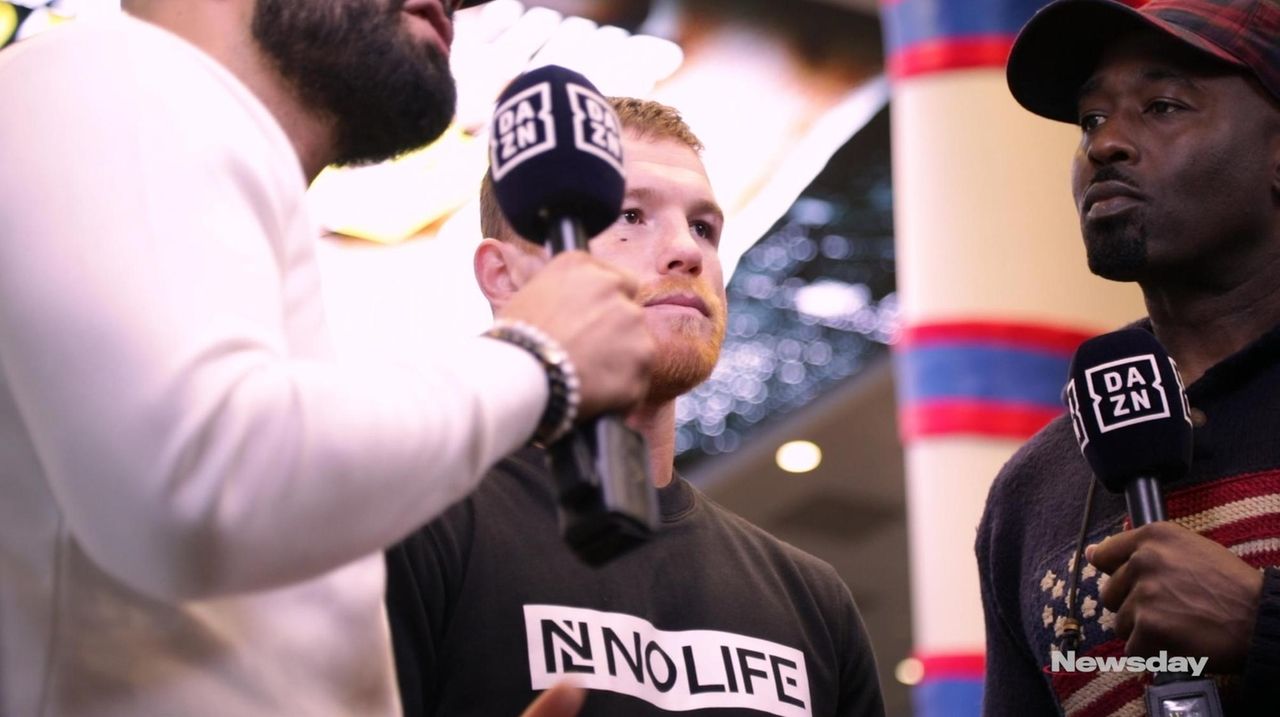 On Wednesday, Canelo Álvarez & Rocky Fielding were among some of the boxers working out for the media in advance of their fight this Saturday at Madison Square Garden. Álaverez & Fielding will be fighting for the super middleweight world title. Credit: Newsday / Yeong-Ung Yang

It has been a while since Madison Square Garden was considered the Mecca of Boxing. But fighting inside the historic arena still means something to today’s fighters.

Canelo Alvarez, a veteran of 53 fights and one of the top fighters in the sport, will make his Garden debut on Saturday night when he challenges Rocky Fielding for the WBA super middleweight title. Alvarez is seeking to win a world title in a third weight class. The fight is being broadcast on the streaming service, DAZN.

“It fills me with a lot of pride,” Alvarez said on a conference call with reporters. “I know great fighters have fought there, like Muhammad Ali, and to mention more fighters would be unnecessary. But to be the main event there at Madison Square Garden, it fills me with pride.”

His opponent, Fielding, added, “To fight at Madison Square Garden against the biggest name in boxing is unbelievable.”

From the end of World War II through the early 1970s, Madison Square Garden was the foremost boxing arena in the world.  But as casinos began to spend more money on boxing in the 1980s and 90s, the major fights began to move away from New York.

Still the allure of the Garden has always had a strong pull.

In 1991, Sugar Ray Leonard announced a return to the sport after a two-year retirement, it was one of his numerous comebacks. However, this time he noted that his career was not complete without having fought at the Garden, which is where he returned to face Terry Norris. The comeback was short-lived, Norris dropped Leonard twice and won a unanimous decision.

In 1995, Oscar De La Hoya, who is now Alvarez’s promoter, sought an opportunity to fight at the Garden. He fared better than Sugar Ray, as he demolished Jesse James Leija in two rounds.

“It’s a very special experience fighting at the Garden,” said De La Hoya, who runs Golden Boy Promotions. “Nearly every great fighter has fought at this historic arena. Canelo is establishing a historic legacy, and I’m excited that fans in New York will be able to see this great talent in such a famed place for boxing.”

De La Hoya and Alvarez recently signed a five-fight, 11-year deal with DAZN that was valued at $365 million. Saturday’s fight is the first in that deal. But the Garden would also be a natural fit if Canelo were to fight Brooklyn's Danny Jacobs. A third fight with Gennady Golovkin would also play well at MSG, Golovkin has fought in New York five times, either in the Garden’s main arena or its Theater.