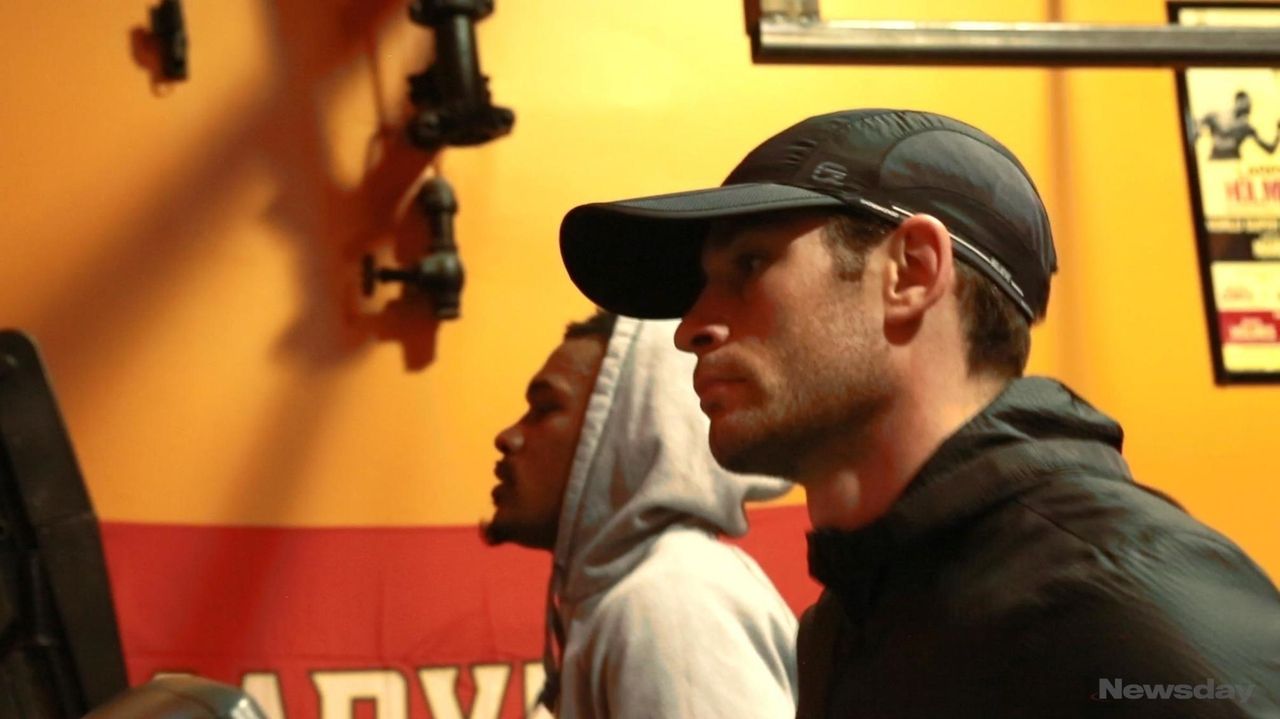 Daniel Jacobs is preparing for his next fight on Saturday April 28, 2018 vs. Maciej Sulecki at the Barclays Center in Brooklyn.  In order for Jacobs to get closer to his goal of reclaiming the world middleweight title, he has teamed up with former world champion boxer and Greenlawn native Chris Algieri, who also is a nutritionist, to help him get ready for the fight Credit: Newsday / Ryan Gerbosi

On Saturday night, Chris Algieri returns to Barclays Center, the scene of his greatest boxing triumph when he wrested the WBO super lightweight title from Ruslan Provodnikov slightly less than four years ago. But Algieri isn’t on the “Straight Outta Brooklyn” card. He’s working as a nutritionist to help prepare former WBA middleweight champion Daniel Jacobs for the main event against Poland’s Maciej Sulecki.

In fact, a contractual dispute with promoter Joe DeGuardia has kept the 34-year-old Algieri out of action just over two years since his last bout, a fifth-round TKO loss to Errol Spence Jr. on April 16, 2016 at Barclays Center. That was the third loss for Algieri (21-3, 8 KOs) in a span of four fights after the Provodnikov win. Considering the other two losses were by decision against Manny Pacquiao and Amir Khan, Algieri still was a viable contender, but now, he’s in limbo.

Algieri accompanied Jacobs to a public workout Wednesday at Barclays Center, and when asked if he still has a future in boxing, he said, “I do.” Asked if he still is tied up by DeGuardia, Algieri said, “I will be back very soon. Very soon . . . As soon as possible.”

Algieri provided no other details on the status of his contractual dispute, and DeGuardia did not immediately return a telephone message from Newsday Wednesday night. Algieri said he still spars and is working with Jacobs’ trainer, Andre Rozier, and he does conditioning work alongside Jacobs.

Algieri first joined forces with Jacobs to help prepare for his close decision loss to middleweight champion Gennady Golovkin in March of 2017, and the Sulecki fight will be their third together.

Describing their relationship, Jacobs said, “It works for me. Chris is a valuable tool in my camp from the mental aspect and, of course, from the nutrition and physical aspect. It’s great to have a guy who understands everything I’m going through right now. It’s true respect between us.”

Algieri has a health sciences degree from Stony Brook University and a masters in clinical nutrition from New York Institute of Technology. During his exile from the ring, Algieri also has served as a nutritional consultant at Stony Brook, serving 14 teams and more than 400 athletes.

But the association with Jacobs has been especially productive for a fighter who used to struggle to make the 160-pound middleweight limit comfortably. “He was saying earlier this week that he used to dread fight week because of [making] weight,” Algieri said. “But he said, ‘Now, I’ve got you and our plan, and everything is based off of science. I don’t have to worry about it.’ It’s made him a much happier fighter coming into fight week. He’s going to make the weight easy and be strong on fight night.”

An important part of Jacobs’ story is that he is a cancer survivor. Algieri said that necessarily is a factor in the nutritional regimen for Jacobs.

“I take it into account because of how important it is for him to have dense, nutritious foods — antioxidants, anti-inflammatories, things like that to make sure his body is running at full capacity,” Algieri said. “It’s making sure he is fueled not only at the muscular and performance level but at the cellular level, making sure everything is working properly. A cancer survivor is always a cancer survivor, so making sure their health is prominent is very important.”

Nash: 'Unfortunate play' will sideline Durant for 'weeks'
Isles not overwhelmed about the road ahead
LI's Joe Smith Jr. defends his title against Steve Geffrard
Time for Baseball Hall of Fame ballots to be made public
Alexander, St. John's bounce back with big win over Hoyas
Isles' schedule filled with teams they've been losing to
Didn’t find what you were looking for?