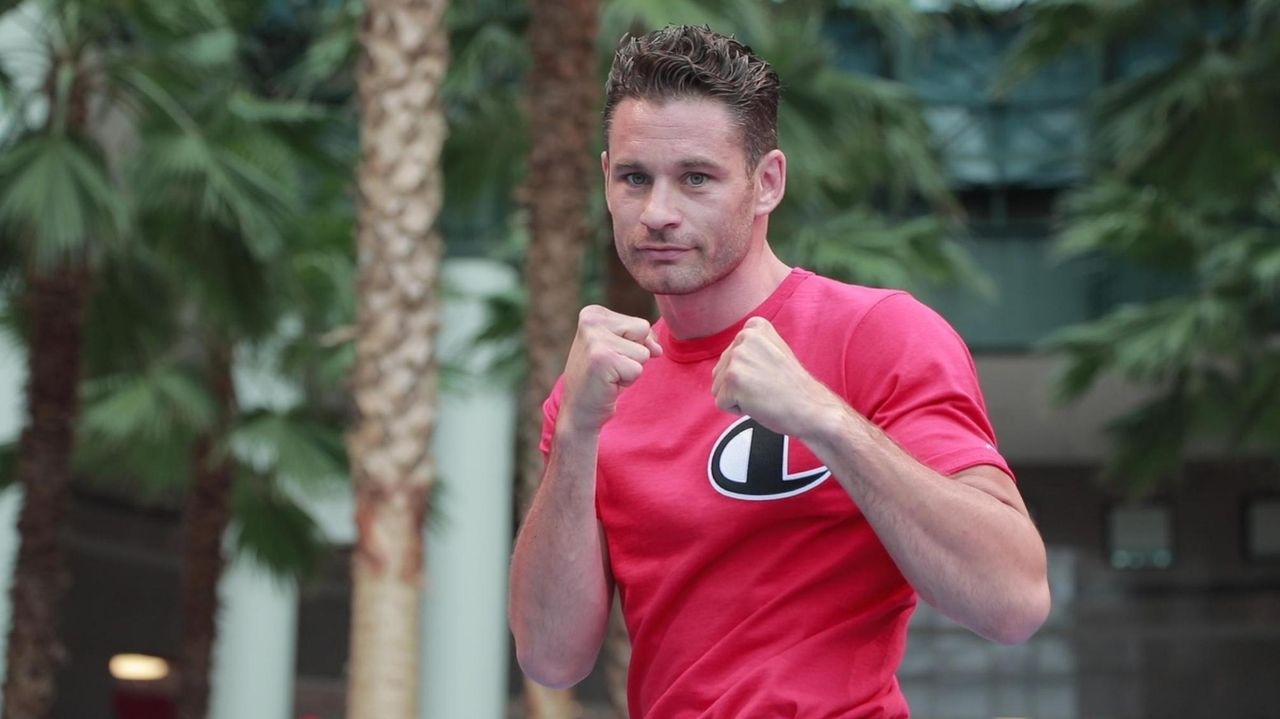 At a media workout on Tuesday, Greenlawn native Chris Algieri said that he hopes Saturday's fight against Tommy Coyle at Madison Square Garden will set him up for a title shot later this year. Credit: Newsday / Yeong-Ung Yang

He might have been out of the ring for 31 months as the result of a managerial dispute, but former world champion Chris Algieri never lost touch with boxing or his appetite to work at the sport on multiple levels. Now, he has the opportunity to reap the fruits of his labor in and out of the ring in whirlwind fashion.

First, Algieri (23-3, 8 KOs) faces hard-hitting Tommy Coyle (25-4, 12 KOs) of the United Kingdom in a light welterweight bout on the undercard of heavyweight champion Anthony Joshua’s defense of his four titles against Andy Ruiz Jr. Saturday night at Madison Square Garden. Algieri is hoping a victory will put him in line to regain the WBO 140-pound belt he won from Ruslan Provodnikov nearly five years ago.

Then, on Tuesday, the official launch of “The Fighter’s Kitchen,” a cookbook authored by Algieri, will take place. It combines his background as a nutritionist with his passion for food along with anecdotes about the recipes and how they relate to his life and to his boxing career.

“I feel really good about where I’m at right now,” Algieri told Newsday recently as he approached the third bout of his comeback. “I’m putting out a lot of positive energy into the universe, and it always comes back. Just trying to put out good stuff so I can come back around and touch as many people as possible. That’s always been the goal.”

The person Algieri, 35, is most focused on touching is Coyle, a 29-year-old fighter whose nickname “Boom Boom” is an apt descriptor. “He’s a tough guy,” Algieri said. “He comes to fight. He really believes in his right hand and his ability. He’ll take shots to land shots. That’s got to be the idea all night is to hit and don’t be hit. If he’s willing to take them, I’m willing to give them.”

Before his hiatus from the ring, which was prompted by a dispute with promoter Joe DeGuardia that since has been resolved, Algieri moved up to welterweight and was attempting to develop more power. But during his layoff, the Huntington native began working with former middleweight champion Daniel Jacobs and his trainer, Andre Rozier, as a camp nutritionist and sometimes boxing consultant.

When he resumed his own boxing career, Algieri asked Rozier to work with him and trainer Keith Trimble of Bellmore, who has been by Algieri’s side for all his bouts. They are helping him return to his roots as a boxer following two unanimous decision wins over Angel Hernandez in November and Daniel Gonzalez in January.

“I’m getting back to more of my lateral movement, utilizing my jab and combinations,” Algieri said. “I feel better at the lower weight. I can utilize my speed and my distance.

“A lot of it is timing and distance, judge of range, controlling the space in the ring. I’m a ring general, and we’re fighting the fight where I want it to be fought and making sure I’m not taking any unnecessary punishment and I’m dishing out as much punishment as I can.”

Algieri, who said he has sparred more than 100 rounds, began preparations for this fight in early March while he was working in camp with Jacobs, who was training for the fight he lost by unanimous decision to Canelo Alvarez on May 4. He can’t help but feel he has grown as a result of his experiences with Jacobs.

“I feel really good where I’m at now in terms of my conditioning, my training, my ability to be aware of what my body is doing and also my understanding of the game, my boxing IQ,” Algieri said. “Watching from a third person perspective on big fights like I have with Jacobs has really increased my ring IQ and my understanding of boxing in general.”

While trying to squeeze out a few more good years from his own boxing career, Algieri also has been working on his cookbook since last summer when a publisher contacted him. Algieri holds a bachelor’s degree in health care science from Stony Brook and a master’s degree in clinical nutrition from New York Institute of Technology.

“I was humbled by the process,” Algieri said. “Pretty much every moment that I wasn’t sweating in the gym, I was on my computer working on this book from early August until just before my fight in January to get this thing ready to launch on June 4.

“The recipes are mine,” Algieri said. “They’re for everybody — people who are health-conscious, people who want to be a little trimmer, want to eat a little healthier. There is an intro about nutrition, there’s anecdotes about where the recipes came from and how they relate to my life and my career. I have a passion for cooking and for serving food and enjoying it with others.”

In other words, Algieri plans to dish it out in and out of the ring.

LI's Algieri wants to 'make a statement' at MSGGreenlawn native Chris Algieri said that he hopes Saturday's fight against Tommy Coyle at Madison Square Garden will set him up for a title shot later this year.

Bills OC Daboll has second interview with Giants on Tuesday
Barzal and the right wing man: The search goes on
Mika: Rangers unfazed by losing Kakko before Saturday's game
2022 NFL mock draft: The first 28 picks
Hall of Fame balloting trending toward one inductee
Kyrie starting to find his rhythm again
Didn’t find what you were looking for?