Smith isn’t afraid to operate a 15-pound chainsaw while sitting in a tree 20 feet off the ground. Smith isn’t afraid to do the dirtiest of jobs, including digging trenches in freezing weather, lugging cement blocks up a steep hill and, worst of all, power washing the walls of a septic plant covered in something so noxious that he could barely breathe as it blew back at his face.

The light heavyweight boxer from Mastic Beach isn’t afraid to push himself to the brink physically and emotionally to chase his dream, to put in long hours of training in the gym each night after logging a full day of grueling work as a member of Laborers Local 66 on Long Island.

Yet, 10 rounds into the most important fight of his life, an unfamiliar feeling began to bubble up inside of Smith as he headed to his corner last month at the Osage Casino in Tulsa, Oklahoma. His opponent, Maxim Valsov, was giving him everything he could handle and then some. While Smith's cutman Stitch Duran worked on a cut over his eye, Smith was seized by a fear that everything he worked so hard for was slipping away.

"It was definitely a scary moment," Smith said in an interview with Newsday last week at Heavy Hitters gym in Ronkonkoma. "I was either going to become world champion or lose the fight and regret it for the rest of my life. I knew this was it. I wasn’t going to get another shot."

He wouldn’t need it. In a fight so brutal that Smith’s wife, Kelly, had to sit in the hallway for the last three rounds, Smith took charge in the championship rounds and won the vacant WBO light heavyweight title with a majority decision over the Russian Vlasov, 115-112, 115-112, 114-114, on April 10. 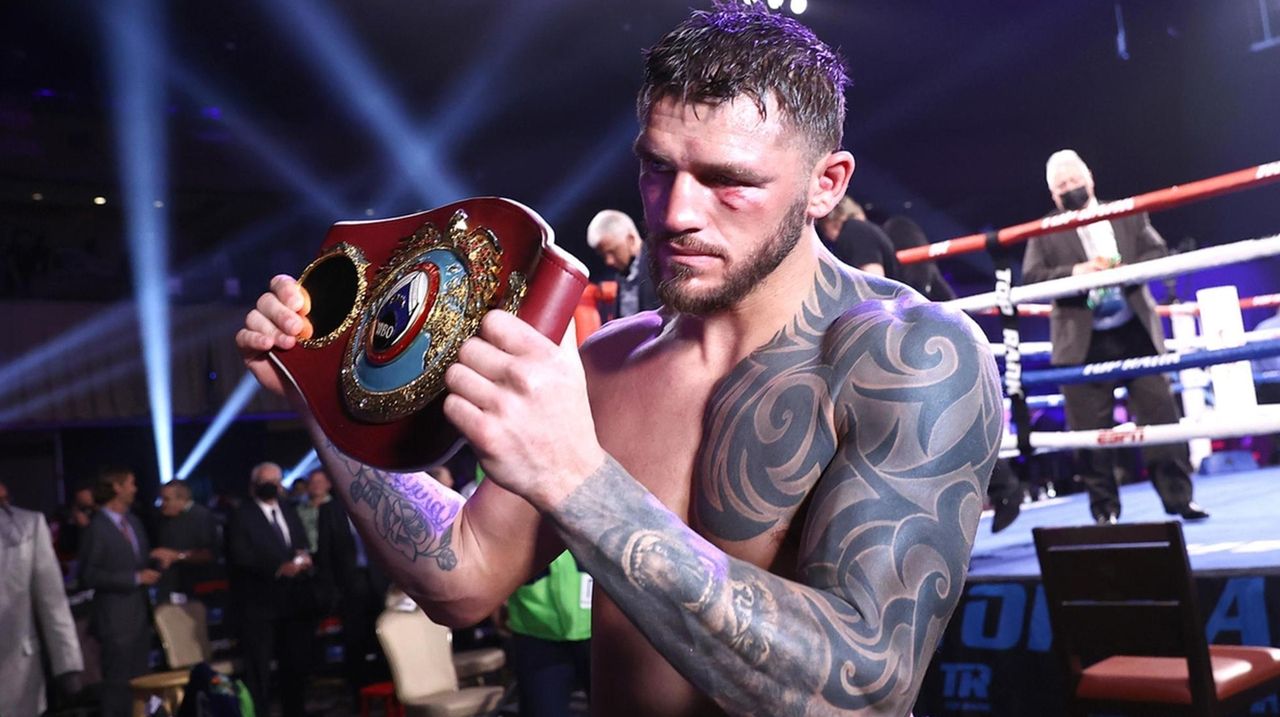 "To be one of the few champions from Long Island is a huge accomplishment for me," said Smith, who has a 27-3 record with 21 knockouts. "It’s something I worked for my entire life. It’s something my trainer Jerry worked for his entire life. So just winning the world championship with him in my corner was a big accomplishment for me … It’s been a long road."

A long road with a lot of crazy and improbable twists and turns, including huge upsets, a COVID-postponed title fight and a beautiful wedding squeezed into a small sliver of time between two training camps.

Intro to the gym

The oldest of seven boys and one girl, Smith started boxing at age 13 when his father brought him to Heavy Hitters gym in Ronkonkoma to keep him out of trouble. He was 17 years old and had fought some amateur fights when Jerry Capobianco approached him at the gym.

"He told me he could make me a champion. I think he said it would take three years," Smith said with a laugh.

Capobianco’s father, John Sr., had run the Huntington Athletic Club and trained Gerry Cooney, the famous Long Island heavyweight who never won a title. Jerry Capobianco and his three brothers had all been fighters and grew up around the business.

"I saw Joe and I knew he just had this toughness that was hard to find," Jerry said. "You can teach a lot of kids how to fight, but to have that will to win when things are against you. That’s rare. You have to be born with that."

Joe may have been tough but he wasn’t exactly disciplined.

"He was a pain in the beginning," Jerry remembered.

"There were times after that where I would drive to his house and say, ‘You’re late. I’ve been sitting there for an hour,’" Capobianco said. "I would drag him to the gym. But I knew at the end, it was going to be worth it."

Smith signed a promotional contract with Joe DeGuardia’s Star Boxing in 2014, and groomed his career at the Paramount theater fighting on Star’s boxing cards.

Jerry’s brother, Phil, joined the team as a co-manager, along with Jerry. It was Phil who got the brilliant idea to get Smith into the Laborers Local 66 union. At the time, Smith was working with his father for a tree trimming business. The brothers figured the union job would not only provide him with a good living while he trained, it would also provide them with an instant fan base.

That union fan base was instrumental in giving the emotional support he needed en route to pulling off the upset that put him on the boxing map in 2016. The then 27-year-old Smith was scheduled as a tuneup fight in Chicago for light-heavyweight contender Andrzej Fonfara.

Fonfara, a popular Chicagoan, was a 20-1 favorite. Smith’s union made a couple of calls to Chicago and suddenly he had a bunch of union card-carrying fans at his weigh-in. Smith went on to shock the boxing world with a TKO of Fanfara in the first round.

Smith continued to score upsets, including an eighth-round TKO of Hall of Famer Bernard Hopkins when he sent him through the ropes and onto the floor. He got his first shot at a title in 2019, but lost a unanimous decision to Russian WBA champion Dimitry Bivol.

Early this February, it all seemed to becoming together for Smith.

Winnings from his fights had enabled him to start Team Smith Tree Servicing with his father and he had cut back on his other work in order to concentrate on his training. Smith was in Las Vegas getting ready for a Feb. 13 title fight with Vlasov. And in mid-March, he was set to marry Kelly, his longtime girlfriend, on Long Island and then head to the Caribbean for a honeymoon.

The day before the weigh in, Capobianco got a text that Vlasov had failed his COVID-19 test and the fight was being called off. He took a deep breath and delivered the news to his fighter.

"My heart just sank," Smith said. "It was the worst thing I could hear. I had trained so hard. I had a wedding and honeymoon all scheduled. I had friends and family flying in from all over for the fight."

He called and texted Kelly four times at the preschool where she works before she called him back.

"I thought he was lying," Kelly said. "He had worked so hard and I felt so bad for him. I just didn’t believe it. Then I FaceTimed him and saw he was eating bread. And I knew it was true."

Joe Smith Jr. and his bride, Kelly, at their wedding. Credit: Nydia Rose

The honeymoon was postponed but the wedding went on as planned as they waited for news that the fight had been rescheduled. Smith enjoyed himself at the wedding, had a few drinks but did not have any cake.

Soon after, news came that the fight had been rescheduled for Tulsa, for April 10, leaving them less than a month to be ready. With everything that had happened, however, Smith said he wasn’t really mentally ready for the fight until the weigh-in.

In the end, after 10 brutal rounds, Smith realized that the only thing that could keep him from the title was himself. He knew that he hadn’t come this far — he hadn’t chopped down trees, lugged rocks up hills, power-washed waste — in order to fail.

It’s far from over for Smith now. After finally getting to go on his honeymoon, Smith is now back on Long Island and making plans. DeGuardia said they are pursuing a unification match with WBC title holder Artur Beterbiev.

In the meantime, Smith is enjoying being one of the few Long Islanders to bring home a title. On Saturday, May 15, he will do a meet and greet with fans at the Mastic Firehouse from 1-3 p.m. as part of "Joe Smith Jr. Day."

"To tell the truth, it’s just all sinking in right now," Smith said. "I’m back on Long Island doing interviews and it’s starting to kick in — I am the world champ.