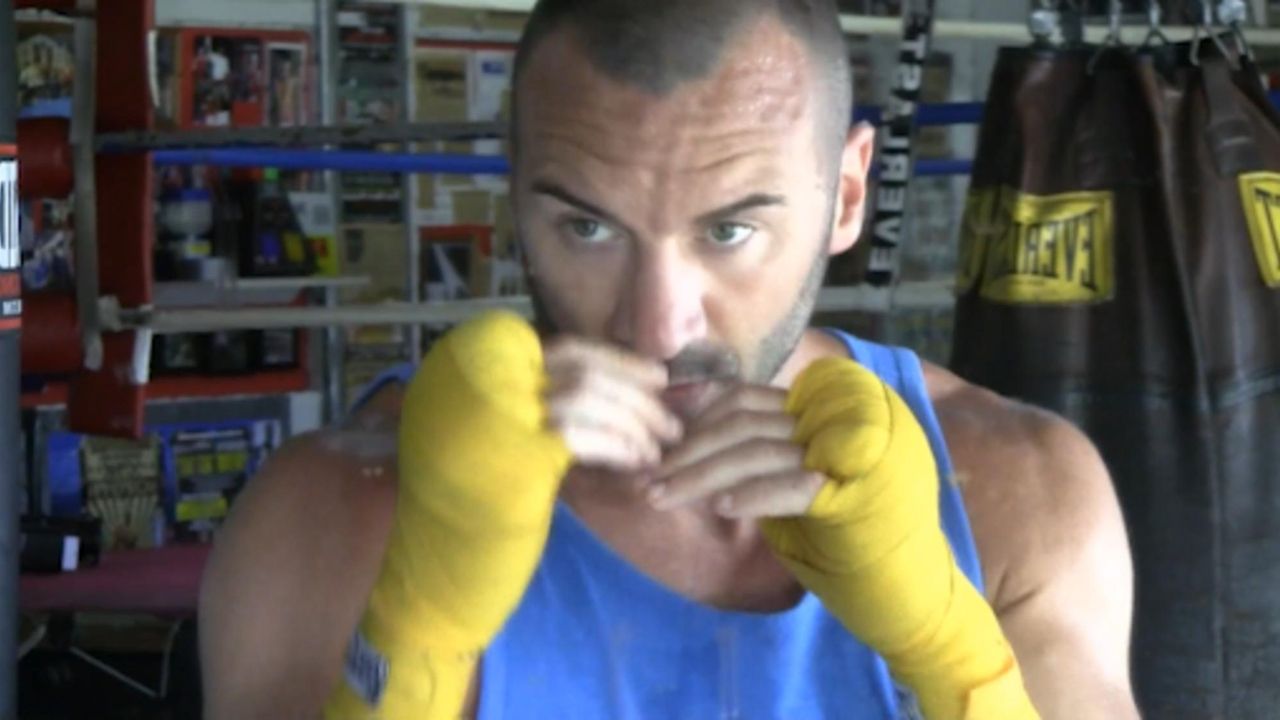 On Thursday, July 6, 2017, professional boxer Sean Monaghan trained at a gym in Freeport for his fight against Marcus Browne. The fight will take place at Nassau Coliseum on July 15, 2017.  Credit: Patrick McCarthy / Patrick McCarthy

The Sean Monaghan story probably should begin with a parental guidance warning: “Some of the events depicted contain unlawful violence, excessive bar fights and may not be suitable for children.”

But if life truly is about the journey, then Monaghan’s transformation from a street-brawling “Sin-derella Man” in Long Beach to popular blue-collar light heavyweight contender at the age of 35 has been remarkable and uplifting. When boxing returns to Nassau Coliseum on July 15 after a 31-year absence, Monaghan’s fight against Staten Island’s Marcus Browne in a battle of unbeaten contenders isn’t the main event, but it’s the one that will put fannies in the seats.

“If I got Marcus in the parking lot, he’d be in trouble,” Monaghan said. “I’m not scared of these guys. Is he slick? Is he going to move and box? Yeah. But I have no fear of any man in this ring. I’m made of steel.”

The fact that the fight will take place in a ring inside the Coliseum, where there are judges and referees and ringside physicians and everyone gets paid, instead of a parking lot, where the police break it up and the winner goes to jail while the loser goes to the hospital, is proof of how boxing changed Monaghan’s life. But it was an arduous 16-year journey from a felony conviction for assault in Long Beach to earning the Coliseum date.

As a townie in Long Beach, Monaghan and his friends bore a certain resentment toward the tourists who flooded the beach and took over the numerous local bars.

“Me and my little crew of friends would be in our own town but surrounded by outsiders,” Monaghan said. “If an opportunity presented itself to straighten out a guy who needed to be straightened out, I loved it. That’s what we did for fun.”

Monaghan said that within the space of a week when he was 19, he was in two dangerous bar fights. He said he put his opponent in the first in the hospital, and the second led to his arrest for felony assault and four misdemeanors. He ultimately received five years probation.

Monaghan assumes he must have had some anger issues, but he’s uncertain of the source. He just knows that, though he was a good athlete, he never enjoyed team sports as much as he loved boxing. That stemmed, in part, from his father, Davy Monaghan, who emigrated from Ireland with his wife, Joanie, and settled in Long Beach, where he ran an upholstery business.

Davy’s five brothers and various cousins and friends followed, and Sean inherited the Irish appreciation for the manly arts. “When I was a kid in the ’80s, all my uncles and everybody lived out here,” Monaghan said. “They would wake me in the middle of the night and bring me down when I was like 5 years old and make me watch Mike Tyson. They would teach me little boxing moves. They trained me to be like a little pit bull.”

When he was in first grade, Monaghan recalls beating up the class bully after he stuck a pebble in the ear of another schoolmate who was taken to the hospital to have it removed. Monaghan’s father and an uncle came to pick him up at the principal’s office, where they put on stern faces and vowed to discipline him.

“Once we got outside, they were all happy,” Monaghan said. “They took me back to my dad’s shop, and there was like a big party. People cheered for me. They quieted down when my mom came because she wasn’t happy about it. So I kind of had mixed signals.”

As he grew older and stronger and began to inflict more serious damage in street fights, all the signals indicated Monaghan was headed for a severe reckoning. His arrest was the last straw for Monaghan’s mother.

“When you’ve got to spend thousands of dollars on lawyer’s fees and you’re looking at going upstate to jail for five years, you’re like, ‘This isn’t that much fun anymore,’ ” Monaghan said. “It was a big reality check for me. My mom had enough of me. She was like, ‘What are you doing?’ ”

His best friend, Bobby Calabrese, asked Monaghan the same question and warned that he was going to wind up in jail or worse if he didn’t find a more productive way to channel his aggression. Calabrese made some phone calls and learned about a boxing program run by trainer Joe Higgins in Freeport.

“Boxing pretty much changed his life,” said Higgins, who still is Monaghan’s trainer. “He was on the police radar and he got jammed up. He was looking at jail time. We had a gym on Merrick Road. He came in and wanted to spar the first day. I said, ‘Take it easy, kid.’ But he just stuck with it. He realized this is where he belonged. In addition to keeping him off the streets, boxing has made Sean a respectable guy.”

Monaghan’s amateur career consisted of only about 15 fights in seven years. A year after he began working with Higgins, the trainer lost his brother Tim, a fireman who died in the 9/11 attack on the World Trade Center. Then the gym on Merrick Road closed, and Monaghan “retired” from boxing for about two years before another friend convinced him to train at a gym in Far Rockaway along with Irish pro John Duddy.

When Higgins resumed his boxing program at a park facility in Freeport, Monaghan returned immediately to work with him. But after a couple of losses in the Golden Gloves, including a legendary split decision loss to Joe Smith Jr., another Long Island light heavyweight contender, Monaghan decided it was time to go pro at the ripe age of 28. By then, he had matured and married his wife, Beverly.

“He realized street fighting was easy compared to what he was doing in the ring,” Higgins said. “He had a loss or two in the amateurs that humbled him and made him grind harder. From then on, it was about finding a real ly good woman and having great kids [Sammy, 6, and Molly, 3] and taking care of them. But I think it was the amateurs when he had those tough fights and said, ‘If I want to do this, I’ve got to take it one step up and leave everything else behind me.’ ”

Monaghan fought 18 times in the first three years after making his pro debut, but it was a slow climb toward top-10 status even though he was undefeated.

“Every level of this game is hard,” Monaghan said. “When you have no experience and you’re in some crappy little locker room in the basement of B.B. King’s and you’re fighting some maniac, that’s hard.

“The most nervous I’ve ever been in my life was waiting for my first amateur fight. I thought I was going to have a heart attack. I’m less nervous now, but every fight is important. I’m always risking my ‘0.’ So every single step of the way has been tough and important for me.”

Monaghan’s physical and mental toughness have defined him. Higgins recalls a fight Monaghan was winning against Elvir Muriqi three years ago at Barclays Center when he suffered a terrible cut around his left eye from a head butt in the ninth round. He might have won a decision right there had the bout been stopped, but Monaghan said he could continue.

“For the first 30 seconds going into the 10th round with a hole in his head, he regrouped and completely dominated the final round,” Higgins said. “That was the moment to me when I thought he was on his way. It was like, ‘You’re going to head-butt me? I’m throwing a hundred more punches.’ ”

When he got to the hospital after the fight, Monaghan learned the orbital bone around the left eye was fractured in two places, his nose was broken and the ligament that controlled his left eyelid had to be stitched together. “They were talking about putting a plate in my face. I said, ‘I’m not done boxing yet,’ ” Monaghan recalled. “They said, ‘We can’t put a plate in your face because it’s going to get knocked loose.’ So I said to just leave it.”

Even after Monaghan gained rankings credibility with the various governing bodies, his attempts to get a title fight were frustrated. He had feelers from Andre Ward, Canada’s Jean Pascal and Germany’s Juergen Braemer, but nothing materialized. Earlier this year, Monaghan and Higgins thought they had a date with WBC champion Adonis Stevenson for April 29 at the Coliseum after negotiations between Stevenson and Long Island’s Smith broke down.

Monaghan actually signed a contract, but Stevenson never did. Higgins suspects that Javan “Sugar” Hill, who trains Stevenson, saw the shape Monaghan was in when they ran into each other at a Garden card in March and decided the timing wasn’t right, especially for a fight on Long Island.

“I think a lot of trainers are looking at styles making fights and the intangibles, and they see Sean is a little bit of a problem,” Higgins said. “I’m not saying they wouldn’t fight him, but they look for better fights for their guys so they can stay on top a little longer.”

After Stevenson backed out, promoter Lou DiBella, who put together the Coliseum card, kept his commitment to Monaghan by matching him against Browne. “I’m thrilled I could get Seanie this opportunity,” DiBella said. “He’s earned the opportunity to fight a big fight on Fox on the first major fight card at Nassau Coliseum in 31 years.

“This is the defining moment of Seanie’s career. A win will earn him a huge fight, likely right back on Long Island . . . Seanie believes he’s two wins away from writing an Irish-American ‘Rocky’ story.”

Monaghan and Higgins are expecting the best from Browne, and they agree their best bet is not to let the fight go to the judges. In Monaghan’s view, Browne has worn down late in some fights and been fortunate to get the decision. Higgins said any sign of weakness from Browne will be “like a shark with blood in the water” to Monaghan.

“He’s a talented fighter, but I’ve seen how he reacts to serious pressure when he gets put in a bad spot,” Monaghan said of Browne. “I’ve seen him have a mental freakout. It’s coming again.

Welterweight, 10 rounds: Figueroa is a former WBC lightweight champion and Guerrero is a former IBF super featherweight world champ. They are expected to engage in a slugfest to position themselves for a welterweight title shot.

Light heavyweight, 10 rounds: Staten Island’s Brown is nine years younger than 35-year-old Long Beach resident Monaghan, and they are long-time sparring partners who are facing off for possible chance at one of the light heavyweight titles.