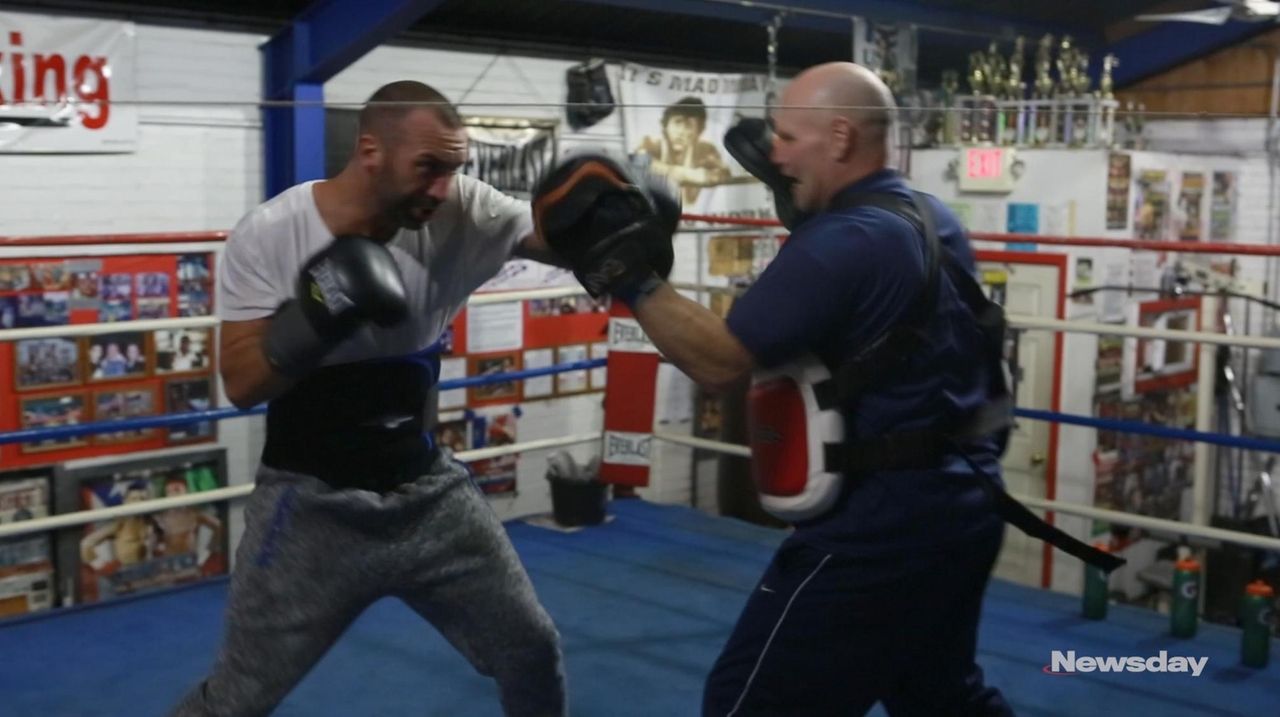 On Monday, Oct. 22, Freeport's Patrick Day and Seanie Monaghan, from Long Beach, who both train with Joe Higgins at Freeport PAL Boxing, talked about their upcoming possibly career-altering boxing matches. Day will be fighting Elvin Ayala for the World Boing Council Continental Americas super welterweight title at Madison Square Garden on Saturday, Oct. 27. Monaghan will be fighting Sullivan Barrera in a light heavyweight bout at the Aviator Sports Complex in Brooklyn on Saturday, Nov. 3, which he and Higgins hope will earn Monaghan a shot at the world title. Credit: Newsday / Shelby Knowles

Patrick Day was 14 when he snuck into his neighbor's garage and started hitting the heavy bag. Joe Higgins had no problem allowing the neighborhood kids to use his make-shift boxing gym. But it always had to be supervised. Hearing the familiar thud, thud, thud, he rushed out to the garage to find Day.

"My initial thought was, ‘What the heck are you doing there?’” Higgins said. "Then I saw that he had a certain skill set and I said, ‘It’s time for you to go to the gym.’”

"Instead of just kicking me out of the garage, I got a formal invitation to the gym," said Day. "It was the beginning of a new life, it gave my life a new direction."

That was 12 years ago. The gym was the Freeport PAL Boxing Club, a squat brick building in the middle of Northeast Park. Day still trains there under Higgins' direction. In its 25-year existence, the gym has produced numerous amateur champions. Now, its two most senior members - Day and Seanie Monaghan - are getting closer to challenging for professional world titles.

"Right away, Patrick and Sean hit it off," said Higgins, 57, of Freeport. "They've been teammates and brothers since the first time they met. And now they are going into really big fights at about the same time. They probably have 500 rounds of sparring with each other. They've helped each other tremendously."

Higgins is hoping that pays off over the next two weeks. First up is Day, who fights Elvin Ayala in a super welterweight fight at Madison Square Garden's Hulu Theater on Saturday. The fight is on the undercard of the Danny Jacobs-Sergiy Derevyanchenko world middleweight title fight.

"I’m treating this like any other fight," said Day, 26, of Freeport. "I am not like ‘This is the Garden.’ I could care less about the venue. I could be in a parking lot, as long as I win the fight that’s all I care about.  I don’t mind pressure, I perform well under pressure."

One week later, it's Monaghan's turn. He fights the main event against Sullivan Barrera at the Aviator Sports Complex in Brooklyn. The fight is being promoted by Main Events but is part of the Golden Boy Fight Night Facebook Watch series. With both Monagahn and Barrera perennial light heavyweight contenders, the winner will likely emerge with a world title fight.

"This is going to be probably my toughest fight of my career," said Monaghan, 37, from Long Beach. "He only has two losses but they were both against undefeated world champions and he took them both into deep water. It couldn’t be more important, honestly, my whole boxing career sums up to one night. He’s the gatekeeper to big things, the big things I’ve been working for. Once I beat this guy, I got it made. I'm just getting ready for war."

Monaghan, 29-1 with 17 knockouts, is fighting for the first time in a year. The Barrera fight was originally scheduled for August but was postponed after Barrera suffered an injury in training.

"We kind of both like to come and get busy,” Monaghan said. “The crowd is going to have a good time that night."

While Day has been in the gym since his early teens, it was somewhat of a last resort for Monaghan.

"Sean was a troublesome youngster, getting in trouble with the law," said Higgins, a retired New York City firefighter. "He had just been given probation and a friend of his brought him to the gym. I thought, if we can get this kid to settle down, we can make a tiger out of him and that’s what happened."

Added Monaghan, "Joe is like my second father, he took me in when I was 20, I was a mess. I really had no direction in life. Joe put me on a clear cut path to be a good member of society. Here we are, 17 years later, I’m No 4 in the world and I'm right on the verge of big things."

In a sport where the object is to render your opponent unconscious, Day and Monaghan are universally respected in the gyms around Long Island.

"Both Seanie and Patrick are really just regular guys, blue collar and humble," said Joe Gadigian, a trainer at the Westbury Boxing Club and someone who has competed against the Freeport Gym for years. "Neither man lies inside or outside of the ring, they come to win and that’s what they practice for every day. You need only to watch them train to see their drive and commitment."

Higgins is equally as quick to extol the virtues of his fighters, but he wants more.

"The thing that I am most proud of is that they are absolute role models, they are wonderful people," said Higgins. "Seanie is a husband and father of two children. Patrick has a college degree. We want every kid to succeed in life but I want these kids to be world champions. They are knocking on the door.  I just want them to be the best they can be and possibly become world champions and possibly be financially set for life. That's what I want."