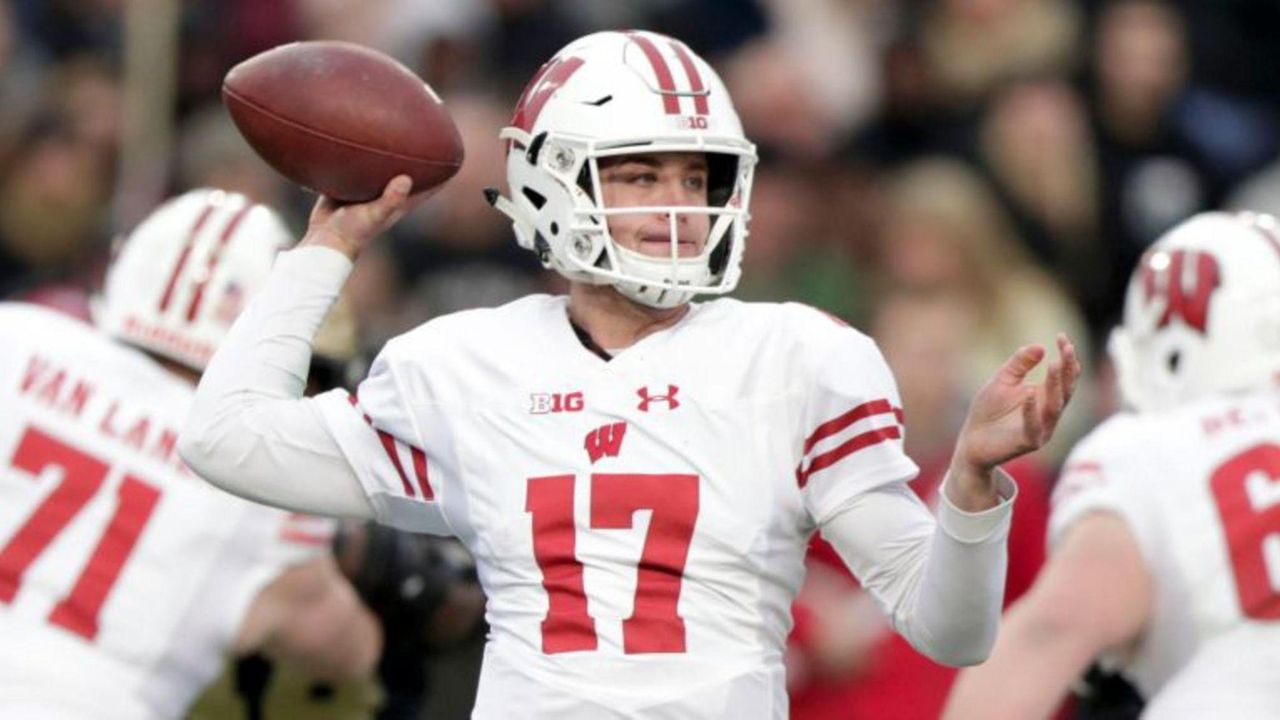 Newsday’s 2016 Hansen Award winner Jack Coan, from Sayville, will make his fourth start of the season at quarterback for Wisconsin when the Badgers meet Miami in the Pinstripe Bowl on Thursday at Yankee Stadium. On Monday, he talked about how excited he is to be playing in front of his family and friends on such a big stage. Credit: News 12 Long Island; Photo Credit: Zach Bolinger/Icon Sportswire; AP/Michael Conroy, Paul Sancya, Morry Gash, Nam Y. Huh; Getty Images/Dylan Buell, Jonathan Daniel

Jack Coan will have the benefit of certainty as he goes into the biggest start of his college football career.

Coan will make his fourth start of the season at quarterback for Wisconsin when the Badgers meet Miami in the Pinstripe Bowl on Thursday at Yankee Stadium. In his other games, the former Sayville High star wasn’t sure until late in the week if first-stringer Alex Hornibrook would be healthy enough to play. Coan was told by coach Paul Chryst on Wednesday that he will be the starter as Hornibrook still has some symptoms from a head injury earlier this season.

“It’s a definite benefit,” offensive coordinator Joe Rudolph said Friday on a conference call. “It gets your mind set early and helps you embrace your role right off the bat.”

Newsday’s 2016 Hansen Award winner took the news that he’d be starting his first bowl game close to home “close to the vest,” Rudolph said. “But you see how someone approaches the next day and the day after that and you can tell he’s really excited. He’s pumped. It’s a chance to lead us into a bowl game. It’s an incredible setting. And being close to home excites him about it.”

“He’s talking about playing in front of his family and friends,” Wisconsin running back Jonathan Taylor said. “He’s excited to be going into his hometown and being able to play and show his skills on that big stage.”

Coan got his first start for the injured Hornibrook on Oct. 27 at Northwestern, a 31-17 loss. He came off the bench the next week against Rutgers in a 31-17 win and started games at Penn State and Purdue (a loss and a win, respectively) for the Badgers (7-5). He was 50-for-82 passing for 442 yards and four touchdowns with two interceptions.

Wisconsin was in a position to redshirt Coan and get him an extra season of eligibility if he did not play in the Pinstripe Bowl, but the circumstances dictated installing him as the starter. Rudolph watched him progress and get more comfortable in those four games and sees him as ready.

Coan is looking at a serious challenge. Miami (7-5) has the top-rated passing defense in the country, allowing only 140.8 yards per game and making 15 interceptions.

The certainty that he is starting has put the Wisconsin coaching staff into a position it believes will allow Coan to succeed.

“You want to have a package for him that he is really confident with,” Rudolph said. “You want him to flat-out know it inside and out and we have time to do that, which is pretty cool .  .  . This should help us in the bowl prep.”

“I’ve seen Jack Coan develop really well over the past couple weeks,” Taylor said. “We can’t wait for him to get out in this bowl game and see what he can do.”