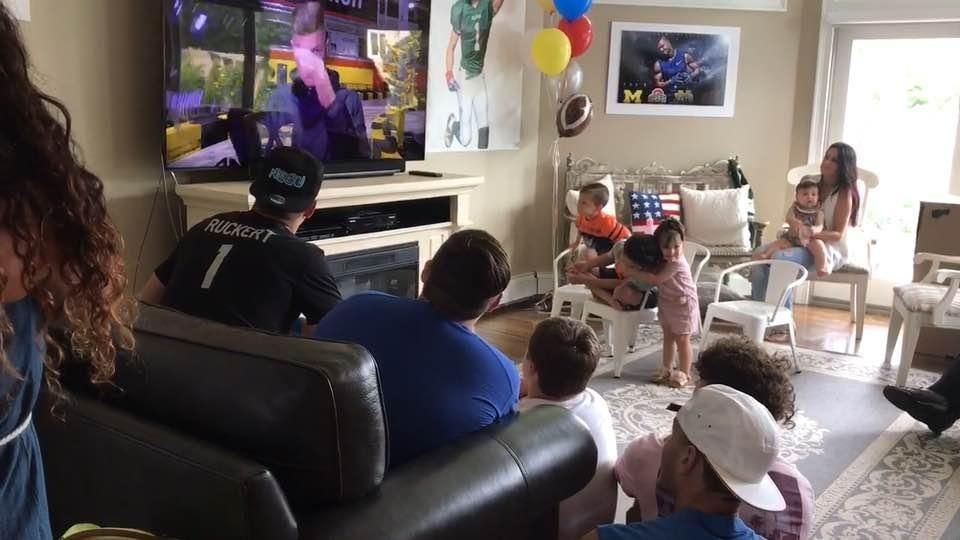 A year from now, Jeremy Ruckert plans to trade his Lindenhurst green for Ohio State’s red and white.

The tight end, considered the top recruit at his position in the class of 2018 by 247Sports and Scout.com, sat with family and friends at his aunt’s home in Massapequa Park on Monday, huddled around the television.

Ruckert filmed a video with Bleacher Report on July 5 to announce his verbal commitment to Ohio State, and when the video went online at 3 p.m., everyone sat attentively. He chose the Buckeyes over Michigan, Notre Dame and Wisconsin.

The one-minute video featured Ruckert and his friends driving go-karts, each labeled with one of his final four choices. Of course, it was Ohio State that emerged the winner.

“They always were a step ahead of everybody else,” said Ruckert, who had 117 receptions for 1,624 yards and 13 touchdowns in his last two years at Lindenhurst. “All four schools were very similar on the field and education-wise, but the way they were really interactive with my family and all my close friends, they stuck out, and that was one of the main reasons there.

“They would always text my mom, my dad, my girlfriend and her family just to see how they’re doing. They showed they cared about me, not just the football player.”

Once the video ended with Ruckert emphatically ripping open his jacket to reveal a red Ohio State shirt, red and white balloons shot to the ceiling and relatives cheered. The 6-6, 239-pounder with elite receiving skills then played the role of quarterback, tossing Ohio State gear to every family member there.

“This is what it’s all about,” said his mother, Jamie. “They’ve been with us through everything. Every time we went on a visit, we’d come back and talk about it. They’re at all his games.”

Ruckert said his mother and his father, Bill, didn’t pressure him to choose one school or another, nor did they rush the process. He came to the difficult decision last month after attending The Opening in Beaverton, Oregon, a camp sponsored by Nike for the nation’s top recruits.

“He’s been recruiting me for about two years now,” Ruckert said. “Coach Meyer said right when he saw me at camp that I was his guy. They didn’t take a tight end in [the last two classes]. He made it a point that I was his guy, and that when I get there, he wants to have me make an impact early.”

“We’re very proud of him and we’re excited for what’s to come,” his mother said. “Go Buckeyes!”