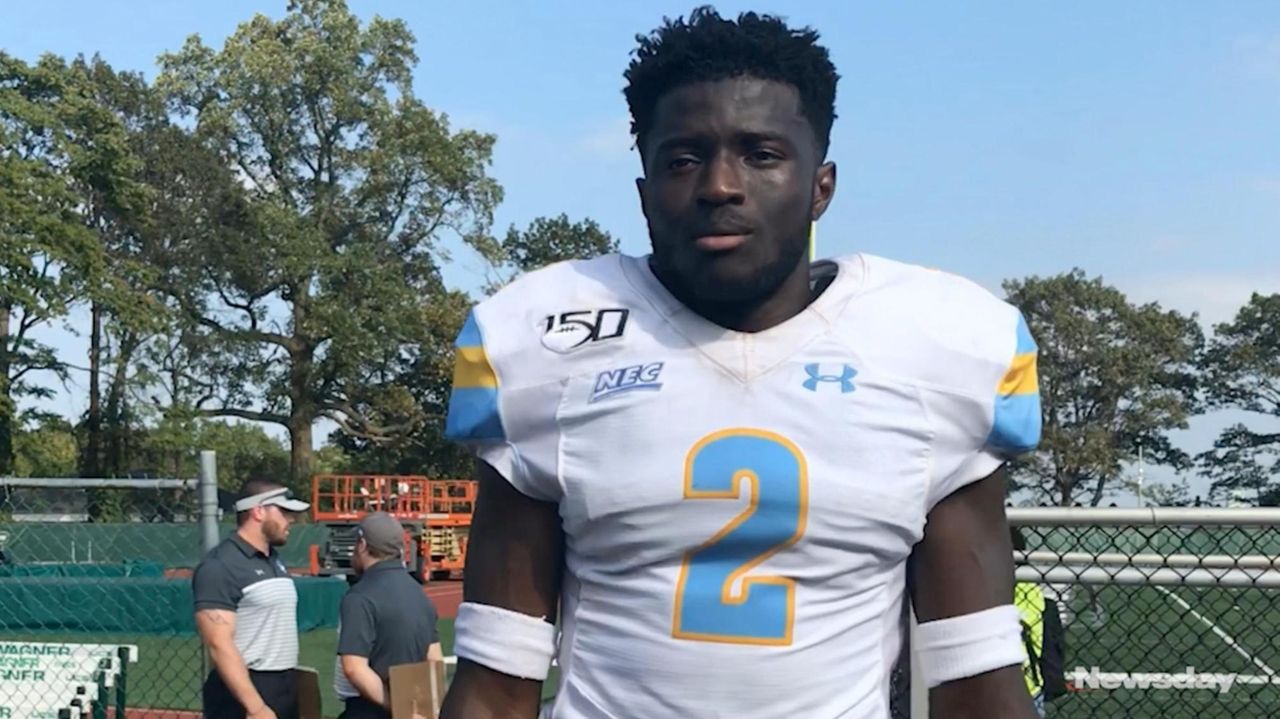 The Long Island University football team continues to take its lumps in its inaugural FCS season. Even as positives emerge — i.e., a strong first half of offense and a sturdy second half of defense — insurmountable negatives take over.

Coach Bryan Collins spoke last week about how getting into a rhythm by playing games in consecutive weeks could bode well for the Sharks, but it was more of the same result Saturday against host Wagner.

“I thought we improved from last week,” Collins said. “I think we’re a better football team this week than we were last week.”

LIU opened the second half with a bit of energy, as Jerome Brooks III came off the edge to block Eric Silvester’s 41-yard field-goal attempt. The ball bounced to Grant Ibeh, who sped to the end zone for a 67-yard touchdown, cutting the deficit to 24-14.

The defense responded by shutting out the Seahawks in the second half, by far the best showing by the unit this season.

“We were down, but we found a way to get our momentum back,” Ibeh said. “We’ve got to put more points on the board, but it’s still a stepping stone. We found a little energy.”

Beathard said that even though the offense didn’t capitalize on the momentum, he thinks LIU is close to putting it together.

Said Beathard: “If everyone can dig deep and find a will in their hearts and minds, we’ll be dangerous, I promise.”

LIU trailed 24-7 at halftime after Wagner’s Silvester booted a 48-yard field goal late in the half. The Seahawks built the advantage on the right arm of Christian Alexander-Stevens, who amassed 195 of his 267 passing yards in the first 30 minutes. He finished 27-for-36 with one touchdown.

He found Joshua DeCambre in the back of the end zone for a 6-yard touchdown to open the scoring. Alexander-Stevens then added rushing touchdowns of 1 and 3 yards, the second of which put Wagner ahead 21-7 with 4:24 left in the half.

“They just had one big play on us. Some of the outs, quick outs, was a coverage call for some of the things we were trying to take away from them,” Collins said. “He kind of took what we gave him at the time. I thought the back end did much better in the secondary this week.”

This after LIU’s offense started strong but stalled as the game progressed. A 13-play, 80-yard drive didn’t result in points, as Briant DeFelice’s 25-yard field-goal attempt was blocked late in the first quarter. He’s had a kick blocked in consecutive games.

On the next possession, Beathard and the Sharks drove 52 yards in four plays and recorded the first passing touchdown in the program’s FCS history. Beathard went over the top of the defense 38 yards to Bofshever, who made a falling catch in the end zone. DeFelice tied the score at 7 on the PAT.

The offensive line, which Beathard praised after last week’s 34-10 loss to Sacred Heart, was not as sharp against Wagner. Beathard was sacked six times (four in the first half) and was hurried out of the pocket on several dropbacks.

“He’s tough as nails,” Collins said of Beathard. “He was under fire all game long.”

LIU vs. WagnerLIU lost to Wagner, 24-14, in a Northeast Conference matchup on Saturday at Wagner College ...