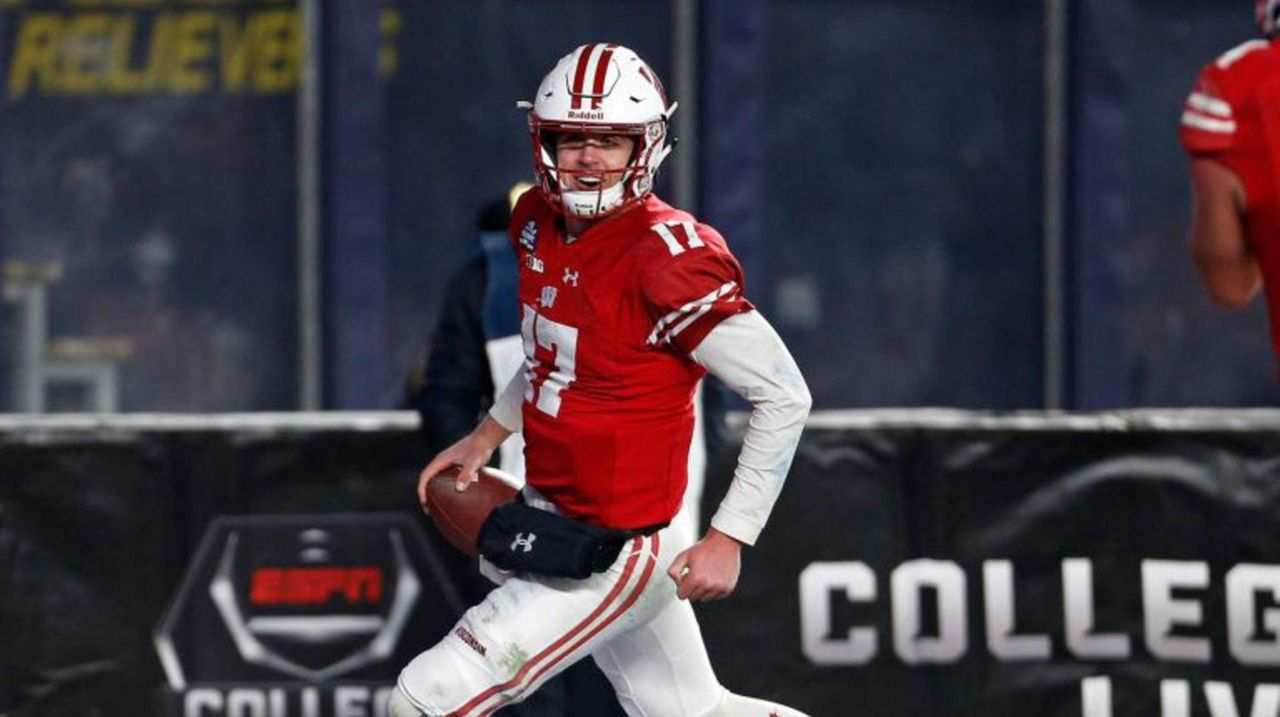 In front of many well-wishers from Sayville and elsewhere on Long Island, Sayville native Jack Coan was 6-for-11 for 73 yards with one interception as the starting quarterback in the Pinstripe Bowl at Yankee Stadium on Thursday.  Credit: News 12 Long Island

Jack Coan has a knack for fast starts. He picked up Sayville’s offense when he was an eighth-grader, hanging around for the playoffs. He graduated high school in January so he could get a jump on college spring practice. And then there was this.

His first pass in the biggest football game of his life went for a 35-yard touchdown. It turned out to be the clincher, too, in Wisconsin’s 35-3 rout of Miami in the Pinstripe Bowl at Yankee Stadium on Thursday.

“It was unbelievable. You watch guys like Jeter and A-Rod growing up. Just to play there in front of all of your family and friends, it was amazing,” the sophomore said. “It was amazing. I was super-excited. Just to throw a touchdown pass at Yankee Stadium. Not many people can say that.”

Coan, starting because first-stringer Alex Hornibrook was out with concussion symptoms, not only threw for a touchdown but later ran for one, a 7-yard bootleg. “I think that only worked once this week in practice,” said tight end Jake Ferguson, his roommate.

Ferguson noticed that Coan was unusually excited before the game: “He’s usually a quiet guy. But he was like, ‘Let’s go!’  ”

In front of many well-wishers from Sayville and elsewhere on Long Island, Coan was 6-for-11 for 73 yards with one interception for the Badgers (8-5). He kept his poise, kept his team together and did the best thing a quarterback for Wisconsin can do: He kept handing off to Jonathan Taylor, the nation’s leading rusher, who gained 215 yards on 27 carries.

Taylor, a New Jersey native, was something of a tour guide to teammates who never had been to New York before. He did not have to show anything to Coan, though. He was impressed by his quarterback, especially on the touchdown run. “I knew he was going to do it. I saw him do it in practice,” Taylor said.

Coan rolled up big numbers even before the game started. He needed 48 tickets for family and friends, which is eight times the allotment that each player received. He was quite grateful that teammates were willing to give up some of their tickets.

It was his fourth start of the season and his fifth game, the latter figure being the more pertinent one. Five games represents the mark at which a player no longer can be allowed to declare a season as a “redshirt,” meaning he loses a year of eligibility. Coan said it definitely was worth it. After all, how often does a Long Island player get to start at quarterback in a bowl game an hour or so from his home?

He joked about the excitement that his dad, Mike, felt about the prospect. Mike broke the news in a tweet just after midnight the previous Thursday. The quarterback was teasingly asked if the elder Coan was going to send out Wisconsin’s first play, too, on social media. “I wouldn’t tell him that much,” Jack said earlier in the week.

“It’s a big deal coming back [here],” Wisconsin coach Paul Chryst said. “You want them to play well no matter where they’re at. But when they come back home, it’s pretty special. I thought he handled it really well.”

For Coan, it’s a place where he is known as the 2016 Hansen Award winner as Suffolk’s best player and the Long Island record-holder for passing yards (9,787) and touchdown passes (128). “Absolutely, it definitely gave me motivation and pumped me up a little bit more,” said Coan, who thoroughly outplayed the two quarterbacks used by Miami (7-6).

It was a day for which he had been preparing all his life, and one that he will remember for the rest of his life. As Taylor said, “I know for me personally and for Coan, it was really special.”

Rieber: After 707 days, Severino is all the way back
Loaisiga feeling 'very good' after throwing from 120 feet
Mets' fadeaway continues at Fenway
Montgomery does the job again as Yankees top Rangers
Rieber: Yankees need to win now, by any means necessary
GM Marks grooming Nets as favorites to claim NBA title
Didn’t find what you were looking for?