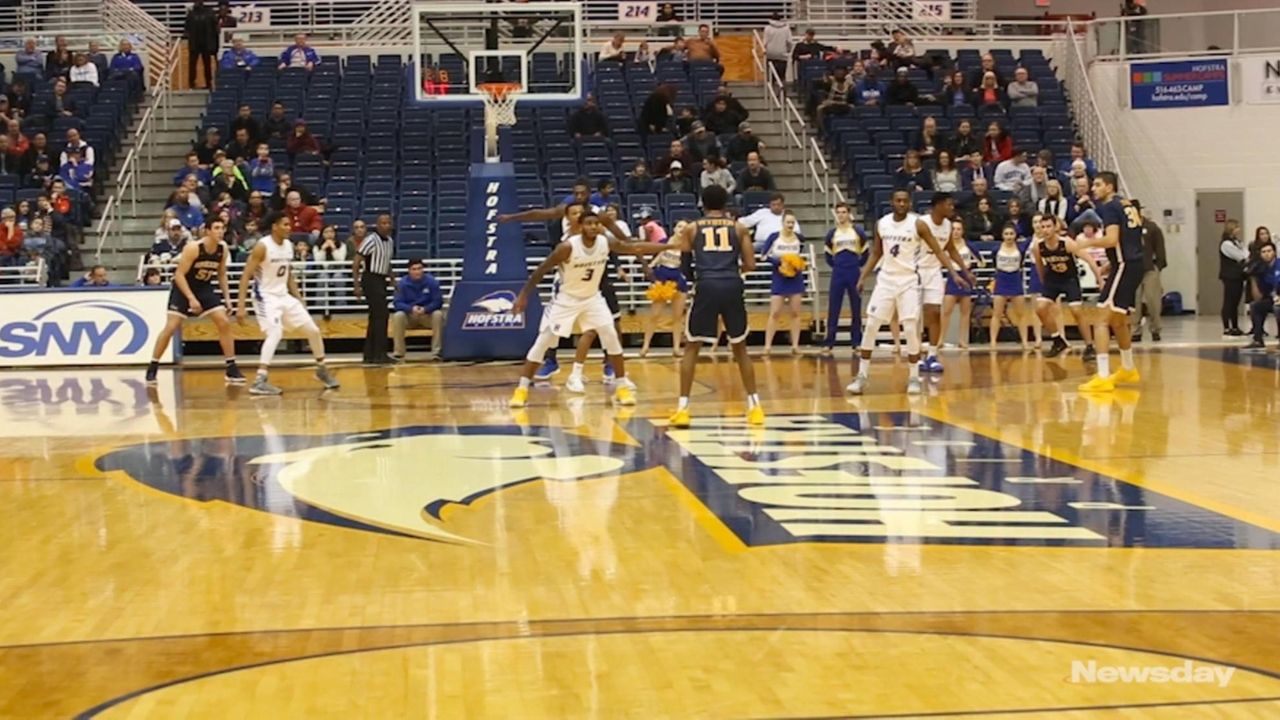 The Hofstra men’s basketball team wrapped up 2018 with another victory and a little bit of history. After the game, coach Joe Mihalich discussed what it meant to celebrate his 100th career win with the program. Credit: Newsday

The Hofstra men’s basketball team wrapped up 2018 with another victory and a little bit of history.

The Pride topped Drexel, 89-75, on Sunday afternoon at the Mack Sports Complex for their ninth straight victory and coach Joe Mihalich’s 100th career win with the program.

“A buddy of mine used to call me after a win and he’d say people don’t know how hard it is to win one game, so when you do something like this, it’s good,” Mihalich said. “You win with good people and you win with good players, and the guys I’ve got sitting next to me are as good as it gets.”

Hofstra’s Justin Wright-Foreman finished with 34 points, the 68th straight game in which he has scored in double figures.

Hofstra (12-3, 2-0 Colonial Athletic Association) got off to a quick start, settling into a suffocating 2-3 zone that held the Dragons to 35.7 percent from the floor in the first half. The Pride went into the break with a 47-27 lead, led by Wright-Foreman’s 16 points.

The senior’s scoop shot with 1:15 left in the half highlighted the dominant start for Hofstra.  “I don’t know what I was doing, to be honest,” he said. “I tried to make a play and then I ended up making another play out of it.”

Despite the early success, the Pride struggled to maintain their defensive control throughout the second half and Drexel (6-9, 0-2) found some holes in Hofstra’s zone.

After Wright-Foreman’s three-pointer gave the Pride a 68-50 lead with 12:57 left, Troy Harper (22 points) led a 14-2 charge by the Dragons, and Coletrane Washington’s three-pointer with 8:38 left made it a six-point game.

Hofstra knew it had to respond, and Wright-Foreman said he was more than willing to take the responsibility.

“We knew we had to keep playing our game,” he said. “Me and Desure [Buie], as the leaders of this team, we’ve got to keep everyone together.”

The Pride answered with a 13-1 run to give the team breathing room.

Drexel had only four field goals in the final seven minutes and shot 45.8 percent for the game. Hofstra shot 60.3 percent, including 42.1 percent from behind the three-point arc.

“What I’m most proud of is that [Drexel] had everything going their way,” Mihalich said. “The momentum was shifting and I was proud of our composure and keeping our poise.”

It was another strong showing for the Pride, but there still are plenty of challenges ahead. That includes the next game, a home matchup Saturday against Northeastern, the projected CAA champ.

“You learn something new every game,” Mihalich said. “Today the challenge was have a big lead, lose a lot of it, keep your composure and win anyway. We’ve had some tough challenges, but we’re ready.”