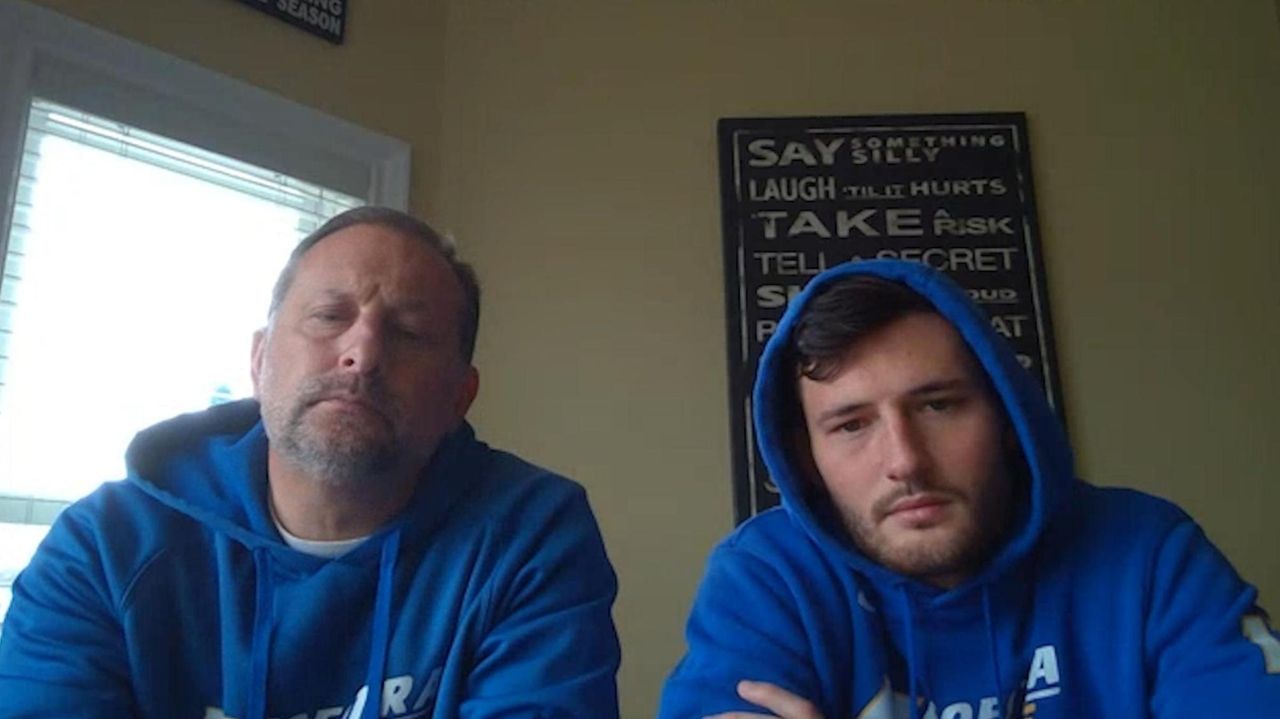 Hofstra men's lacrosse coach Seth Tierney and his son Ryan, a senior on the team, discuss how the coronavirus outbreak has affected the team, the NCAA's eligibility extension and the decision facing Ryan about potentially returning for another season. Credit: Newsday / Nick Klopsis

The NCAA gave new hope on Monday to spring-sports athletes whose seasons were cut short earlier this month because of the COVID-19 outbreak. The Division I Council granted an additional season of competition and an extension of their eligibility.

The restoration of a season of competition applies to any student-athlete who had competed while eligible in the pandemic-shortened spring season.

That announcement was especially uplifting to Hofstra mens lacrosse coach Seth Tierney and his son Ryan, a senior attackman for the Pride.

Under the new guidelines, Ryan will have the option of coming back in 2021 to play his senior season for his father.

Now, they have a chance to get the season back. Lacrosse has always been a father-son experience for the Tierney’s. From the youth leagues to the Hofstra men’s lacrosse program, the highly decorated tandem had made quite an impact in the sport.

Now, there may be hope that the Tierney’s four-year journey can resume in 2021. But father and son agree that the decision to return will not be an easy one as many factors need to be considered to come back next spring.

“Just a lot of thought is going into what to do,” Ryan said. “There was a lot of planning into what I was going to do with my life after I graduated. There’s been a lot of decisions that had to be made that are bigger than the sport of lacrosse. Getting another opportunity could change that decision but does it outweigh the costs and benefits? We don’t know what we’re going to do yet. It’s going to be a long thought out process and we’ll see where it takes us.”

Hofstra’s season ended with a 4-3 record after a 19-9 road victory at St. John’s University. In typical fashion Tierney led all scorers with four goals and three assists in the win. And for the moment, that performance will serve as Tierney’s final game in a Hofstra uniform.

“Obviously, we’re in a unique situation and it’s not the way we pictured his career ending,” said Seth, who’s guided the Pride for 14 years. “I wanted to cherish and just squeeze out every minute, every second that we were together on the practice field, pregame, postgame, all of those things and do everything to not let it end. Ryan was playing well this season and he was a marked man still putting up points and making his teammates better. There were some records that were in his sights. But I know he would give up all of that for an NCAA run.”

The plan was for Ryan, who was named the preseason CAA Player of the Year by Inside Lacrosse, to shatter a few scoring records as Seth led the Pride to a CAA championship and an NCAA postseason berth. Now he has the chance to make it happen in 2021.

“There are pros and cons to coming and to leaving and it will be Ryan’s decision to stand by,” Seth said. “It has nothing to do with me and my feelings. I want Ryan to make this decision for Ryan.”

Isles fall to Bruins in OT, will face Penguins in first round
Rangers' Zibanejad says slow start was due to COVID
Casey Cizikas is Islanders' nominee for Masterton Trophy
Rangers offer no word on future of coach Quinn
Jacob deGrom to go on the 10-day injured list
Barker: Surging Knicks face a key road game vs. Lakers
Didn’t find what you were looking for?