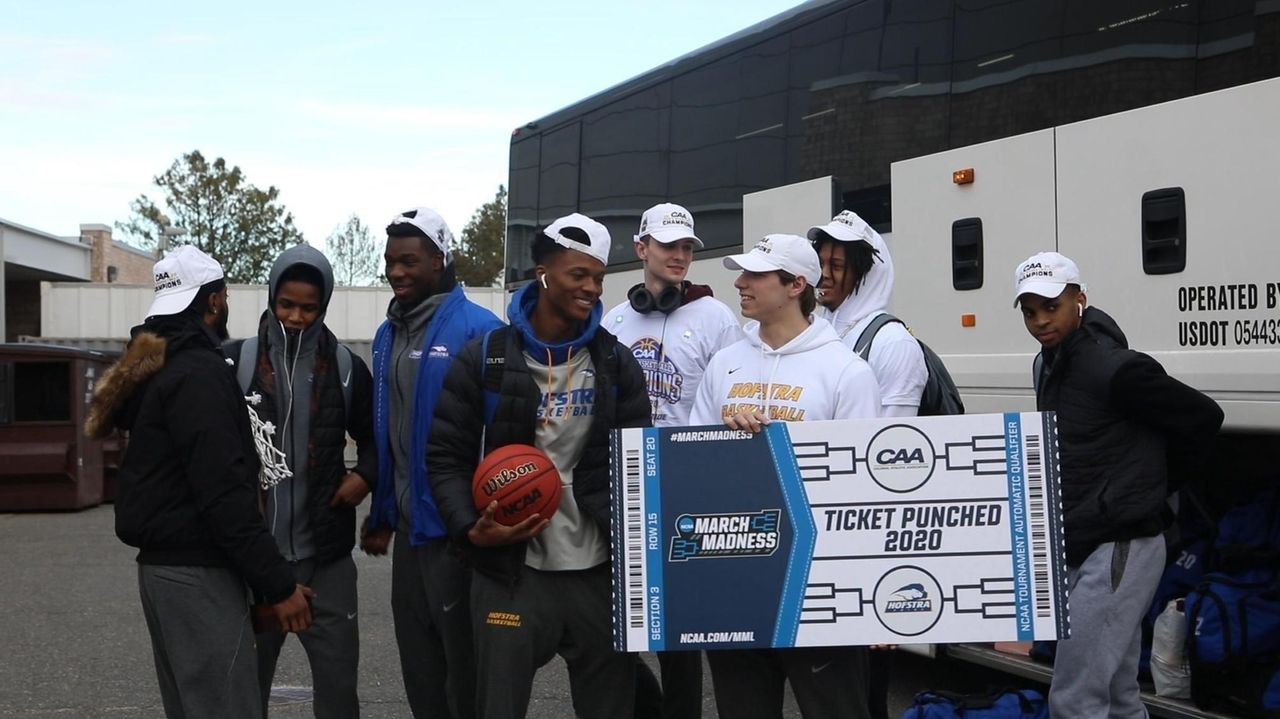 The Hofstra men’s basketball wasn’t greeted by scores of cheering fans when the team pulled into campus Wednesday afternoon, having just earned the school’s first NCAA tournament berth since 2001. There were no posters, no face paint — just a handful of school employees and media ambling around the parking lot, waiting for the victors to emerge.

There’s no universe where something like this isn’t deflating. The team had found out minutes before that because of the COVID-19 pandemic, the NCAA would only allow essential team personnel and a small group of family members to view the games in person. Campus was essentially closed, with in-person classes suspended until further notice. And suddenly, the moment these men had waited their entire athletic careers for didn’t quite look like what they expected.

But that was OK, Eli Pemberton said. There was one thing they could control, and that was the joy on their faces coming off the bus beaming while wearing their Colonial Athletic Association title hats. Desure Buie wore the championship net like a necklace. Connor Klementowicz held up a huge poster with an empty March Madness bracket. On Sunday, the word “Hofstra” will be up there.

“You know, it’s fine,” Pemberton said. “I appreciate that the NCAA is trying to keep everybody safe. It’s not even just about the players. It’s about the people (coming to watch)…Health is serious and we don’t want anyone getting sick, especially (since) we have a lot of fans on Long Island that come and support us.”

Pemberton had not realized that at least a small number of family members would be able to attend, per the NCAA announcement, and immediately smiled when he heard the news. “I’m happy if my family gets to come watch it. Everybody still gets to see it on TV.”

Coach Joe Mihalich, who last made the NCAA tournament when he coached Niagara in 2006, acknowledged that the news wasn’t anything anyone wanted to hear — “we can’t lie about that; it’s a little bit weird” — but the team came around. Hofstra is projected to be a low seed, so the team they play is likely used to attracting an army of fans.

“But, you know, we’re going to wrap our arms around the fact that it’s going to be different,” he said. “We’ll just get used to whatever the situation is going to be. In a twisted way, it might help us more than the team we’re playing, because we’re going to play a team that’s used to selling out and we’ve been through the course of the year where, when we get on the road, there are some gyms where there’s not a lot of people there. We may be more comfortable than they are.”

And none of that will erase what they’ve been able to do, Buie said. It doesn’t temper their satisfaction, either.

“There’s nothing to be mad about,” he said. “We’re just living in this moment, enjoying every minute of it. This will last a lifetime.”

A lifetime, by the way, is about as long as he expects to keep the little piece of basketball net attached to the hat he was wearing.