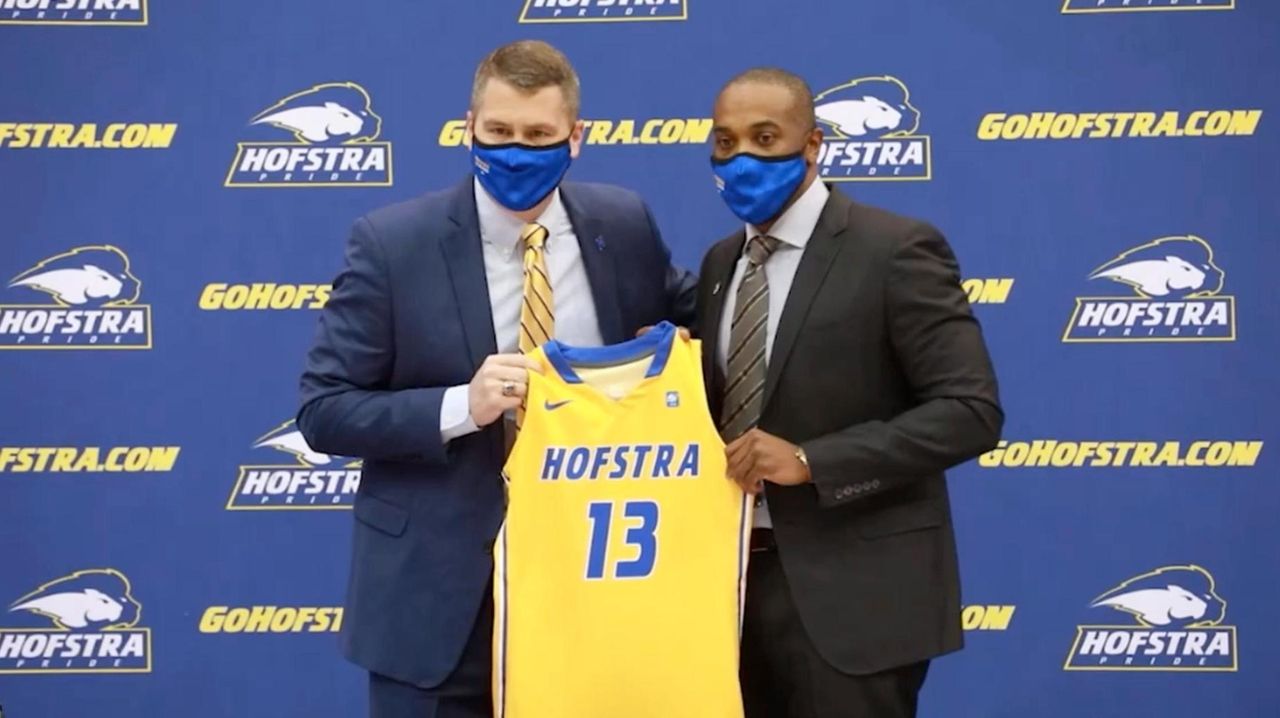 Speedy Claxton left little doubt about his love for and commitment to Hofstra on Thursday morning as he was introduced as the Pride’s new men’s basketball coach.

Often speaking through tears at the Mack Sports Complex, Claxton — perhaps the most decorated player in the modern history of the program — said: "I won’t disappoint you. I promise you that nothing means more to me than this university and our program."

Claxton, 42, is the 13th Hofstra men’s basketball coach. He replaces Joe Mihalich, who after missing the past season on a medical leave took a position in the administration last month. As a senior in 1999-2000, Claxton helped the Pride win the America East Conference Tournament title and advance to the NCAA Tournament for the first time in 23 years, won the Haggerty Award as metropolitan New York’s top player and was the 76ers’ first-round pick in the 2000 NBA Draft.

He played in the NBA for seven seasons and won an NBA championship with the 2003 San Antonio Spurs. Mihalich hired him in 2013 as an assistant coach and he helped develop a string of top point guards, including Juan’ya Green, Justin Wright-Foreman and Desure Buie.

"I came to Hofstra because this was a special institution," Claxton said. "My basketball journey has taken me all over the world and it was always the goal to come back one day to lead this program. I can tell you this: I have worn many names on the front of my jersey, [but] the one that always was near and dear to my heart was Hofstra. Always."

Claxton, who grew up in Hempstead and now resides with his family in Dix Hills, had his No. 10 uniform retired by the Pride in 2010.

Hofstra is just the latest collegiate program to bring back a former star and NBA player as coach, a move that hasn’t always worked out. Juwan Howard returned to Michigan and was the national Coach of the Year this season. But Cylde Drexler was an abject failure at Houston and Chris Mullin’s five seasons at St. John’s were largely disappointing.

"I strive to be great and I know [we’re] going to be great and we’re going to win here," Claxton said. "I don’t only want to [have been] a great player. I want to be a great coach and ultimately be a great leader of Hofstra University. That’s what it’s all about. It’s about my legacy right now that’s at stake."

The tasks immediately ahead for Claxton are many, but two priorities stand out. He has to put together a coaching staff and he has to deal with the changing landscape of college basketball. Extra years of eligibility have been given because of the coronavirus pandemic and more than 1,300 Division I players have put their names into the NCAA transfer portal.

In terms of staffing up, Claxton said: "I want [veterans] around me, guys that have been in the business for a number of years. They always say ‘surround yourself with greatness and guys who know more than you,’ so that’s what I’m going to try to do."

None of the Pride players have put their names into the transfer portal, but the program has done well with bringing in transfers. One example is junior center Isaac Kante, who transferred from Georgia and was named to the all-Colonial Athletic Association second team this season.

"Life is about adapting and the transfer portal is huge right now. A lot of universities and schools are looking to build through this transfer portal rather than take a high school kid because at this level, you win when you have older kids," Claxton said. "We’ve got to dive into that and hopefully we get a couple of good kids out of it."

Hofstra athletic director Rick Cole Jr. explained that Claxton is positioned for success because "this is not a rebuild. We hope to reach even greater heights and that’s our expectations with Coach Claxton."

Said Claxton: "I have the blueprint on how to be successful from this program . . . all [they] have to do is follow it."

“I have worn many names on the front of my jersey (but) the one that always was near and dear to my heart was Hofstra.”

Speedy Claxton named Hofstra men's hoops coachClaxton, who played seven seasons in the NBA, has been an assistant on outgoing coach Joe Mihalich's staff since 2013.