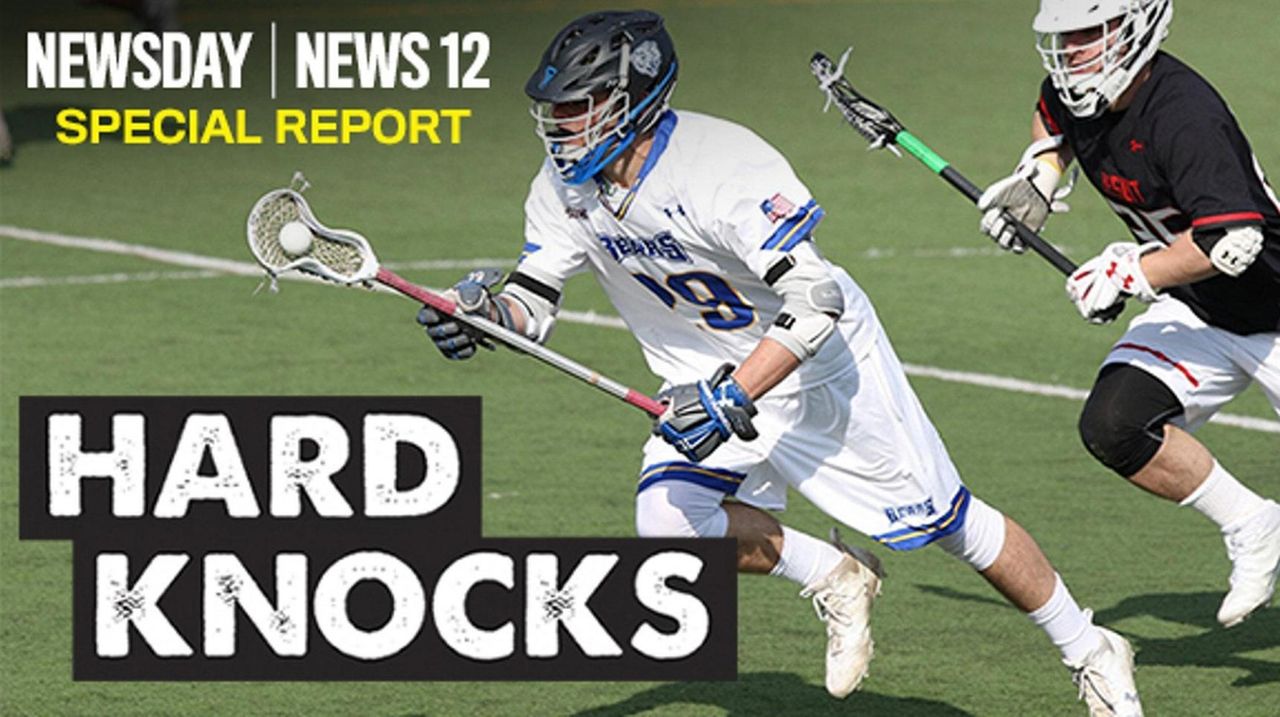 Newsday followed 10 players from the NYIT men's lacrosse team during their 2018 season as the school conducted a study about brain and head safety in the sport. The players displayed "subtle" memory declines and slower cognitive reaction as a result of repeated hits to the head, researchers at the college in Old Westbury found. Credit: Newsday / Yeong-Ung Yang; Raychel Brightman

Men’s lacrosse players at the New York Institute of Technology displayed “subtle” declines in memory and slower cognitive reactions last season because of repeated hits to the head, raising questions about the impact of such blows even if a player isn’t diagnosed with a concussion, according to a new study.

Researchers at NYIT in Old Westbury tracked 10 players through the school’s 18-game season last spring to monitor how their brain functions may have changed. They wore mouthguards embedded with sensors that recorded the force of the impacts during practices and games.

The players, all of whom agreed to share their test results with Newsday, said they did not feel any noticeable difference in their memory or reaction times, but the study showed that all were affected.

The test results showed “subtle changes” and players wouldn’t recognize the shifts in memory or reaction time, said Dr.  Hallie Zwibel, director of NYIT’s Center for Sports Medicine, which conducted the research. Past studies have shown that players are likely to return to their baseline levels after a period of rest.

The key “finding from our research was that both verbal and visual memory — which are two different aspects of our cognitive process — declined . . .   from baseline at both midseason and postseason,” Zwibel said.

Men's college lacrosse is a contact sport in which players wear hard-shell helmets with face masks, chin straps, mouthguards, shoulder pads, elbow guards and padded gloves. Players use sticks with nets that help catch, pass and shoot a hard rubber ball. The sticks also are used to check opponents and try to knock the ball out of an opponent's netting.

Zwibel said the NYIT study is one of the first to look primarily at collegiate men's lacrosse.

Head trauma studies have shifted away from concussions and toward trying to understand subconcussive hits — any impact that does not result in a concussion — in the years since a landmark 2010 study by Purdue University researchers. That study of high school football players was the first to show that hits to the head in practices and games that do not cause concussions still result in changes to a person's brain activity over time.

Eric Nauman, one of the lead researchers in the 2010 Purdue study, said NYIT's findings "make perfect sense" and are consistent with Purdue's studies on subconcussive impacts in other sports, most notably football and soccer.

"That's exactly what we would expect to see," said Thomas Talavage, Nauman's research partner at Purdue.

The purpose of studying subconcussive hits is to figure out when players’ brains need a rest. Even without the diagnosis of a concussion, they can impact a player's performance on the field or in the classroom.

"A few inches or milliseconds on reaction time means winning or losing," Zwibel said. "More important is the academic impact [on the players]. Taking a difficult exam at less than 100 percent is far from ideal."

The long-term effects of subconcussive hits over a season is “at the forefront of where concussions research is going,” Zwibel said.

“We know repetitive head injuries with or without concussions is a potential problem and can cause issues,” Zwibel said. “But how much is too much?”

Blaine Hoshizaki, director of the University of Ottawa's Neurotrauma Impact Science Laboratory, said research studies are now focusing on subconcussive hits because those are a far more telling metric for head trauma damage than actual concussions. He said NYIT's findings are "not a surprise to us at all."

"The evidence and the literature supports exactly this," he said, "and that is these low-level impacts are creating changes, physical changes to the brain tissue, which are basically injured neurons."

NYIT athletic director Dan Velez said the athletic department agreed to let the lacrosse players take part in the study to further understanding of head trauma and see if there’s anything that can be done to help prevent injuries.

“You think of a concussion and you think of the big hit, but you don’t think about all the little hits that keep coming, and how those start to add up," Velez said. “If I look into the future, what do we want from this? I’d like to see technology take over."

Dr. Matthew Heller, NYIT's team physician who oversaw the study, hopes the findings will help toward developing a test that shows when a player has suffered too much head trauma and is at a greater risk of a concussion.

“Is there something we can see before this athlete gets a concussion that can guide us where we need to go as far as preventing?"  Heller said. "Do we need to give someone an extra day off after a game? Two days off?"

NYIT coach Bill Dunn said these studies are important to make the game safer and help the sport grow.

“I’m not looking for kids to not play the sport anymore," Dunn said. "There has to be a way to protect them more than the equipment they are wearing.”

The NYIT players wore sensors called accelerometers that measure the gravitational force — acceleration and weight — of an impact. The sensors recorded any impact of at least five G-forces, which is the equivalent of what people experience on a roller coaster.

Players took hourlong tests that measured their memory, balance and reaction times before the season began, at the midway point and after the season was over.

The players' balance was tested by having them stand in different positions with their eyes closed, such as on one leg, and counting how many times they need to reset. Their memory was tested by asking them to repeat a random order of words. And their reaction times were gauged using iPads. Players were instructed, for example, to press a button when a dot appeared on a screen. Other times they had to touch the screen whenever the name of a color appeared in a matching font — the word green in green font.

The average number of hits of at least five G-forces for the 10 players was 507. The highest number was 1,726, while the lowest was four. Heller attributes the wide range in impacts to the amount of playing time a player received.

Lenny Innamorato, 19, of West Babylon, was the player who had 1,726 impacts of at least five G-forces. Of that total, 14 were more than 80 G-forces, which researchers said is considered the threshold of where concussions are most likely to occur. Zwibel said an example of an 80 G-force hit is a 40-mph car crash.

Innamorato said he was surprised to learn he sustained that many hits to the head. Although he said he probably received the most playing time of the group, he didn’t have a sense of how many hits he absorbed.

Innamorato said that when he took the cognitive test at the end of the season, he thought he performed every exercise just as quickly as he did before and during the season.

“I don’t feel any different,” he said. “But I guess numbers don’t lie.”

Heller said while Innamorato took the most hits of the group, his memory decline ranked in the middle. “Some of your teammates took less hits but there was more of a decline in their memory,” Heller said.

One player in the study suffered a suspected concussion.

Besnick Dalipi, 19, of Westbury, said he was hit in the back of his head during a practice. The impact of the surprise hit knocked him to the ground. He knew when he got up he wasn’t right.

He missed about two weeks of practice before returning.

Dalipi’s accelerometer registered 348 impacts of at least five G-forces, including five hits of at least 80 G-forces. He said he’s certain that the hit that led to his suspected concussion was one of those five major head impacts.

Before the season, Dalipi said he was looking forward to taking part in the study because “I personally want to learn about myself, how much trauma is going through my brain as I take these hits.”

After the season, he said he was “shocked” to learn his device registered 348 impacts. Dalipi said he doesn’t plan to continue playing lacrosse, but not because of the experience with his suspected concussion. Instead, he wants to focus more on his studies as he prepares to become a teacher.

The researchers planned to study only the men’s lacrosse team for one season, but Zwibel said the findings have spurred them to expand their research with more athletes for another year. The researchers decided to include women’s soccer players this fall because that sport commonly has the highest concussion rates among women's sports, Zwibel said.

They plan to spend another season with the lacrosse team and are hopeful some of the 10 players will volunteer to continue to be a part of the study so they can see how their memory and reaction times change during another season.

Athletic trainers are trained to look for big hits and to check on players afterward. But right now it's also up to the players to speak up.

Zwibel said the goal is to take that decision out of the players’ hands. Sometimes the players don’t feel any differently because of adrenaline, Zwibel said. And sometimes they simply don’t want to stop playing.

Innamorato, the player who received 1,726 head impacts, admitted after the season he likely hid head injuries.

Asked if he felt any different throughout the season, he said, “Perfect. Fine the whole time.”

“There were a couple of times where I got hit, after a game I was a little doozy for a couple of days," Innamorato said. "But I was trying to play."

Knicks lose as Pacers romp through their defense
Not much help for Harden as Nets fall in Houston
Trouba says hit on Chicago's Khaira not malicious
Rangers' win streak ends at 7 in loss to Avalanche
Stony Brook men's hoops rides second-half surge to down Hofstra
Several Giants and Chargers receivers in doubt
Didn’t find what you were looking for?