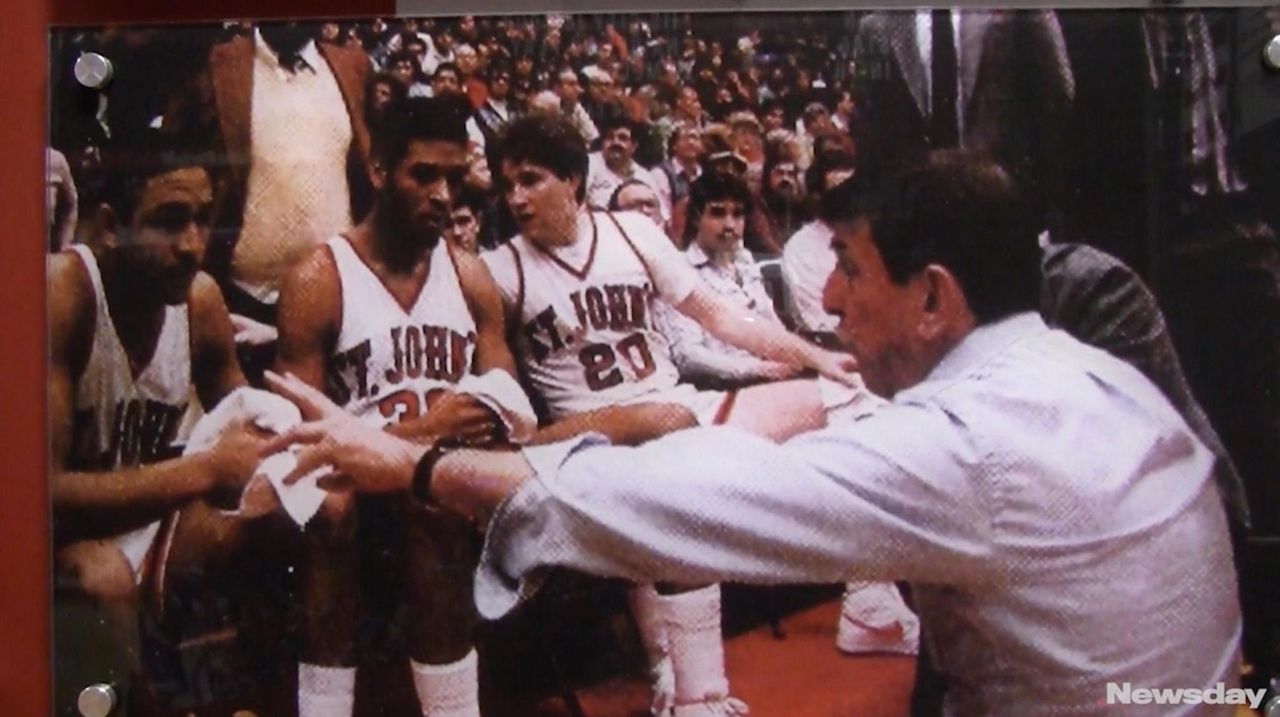 Chris Mullin and David Russell, who were teammates at St. John's, talk about the 1983 team that won the Big East Tournament at Madison Square Garden.  Credit: Raychel Brightman/Patrick McCarthy

In March 1983, the Big East Conference was winding down its fourth season and rising in its reputation as a basketball conference. Its teams made deep runs in the NCAA Tournament and the rugged style of play became the signature of college basketball in the Northeast.

But the conference tournament had yet to become must-see television. That all changed that month, when the Big East Tournament permanently moved into Madison Square Garden. The conference with the lofty ambitions finally had a fitting stage.

“My first year at St. John’s was the first year of the Big East,” said Bellport’s David Russell, who was the conference Rookie of the Year in 1980. “We had no idea that it would eventually be this big.”

It got big in a hurry. Chris Mullin and Patrick Ewing brought star power, but it was the intensity of the rivalries that sold the games to the masses. Any given matchup between St. John’s, Georgetown, Syracuse and Villanova had the potential for a dramatic, last-second finish — or a bench-clearing brawl. With the tournament in New York, St. John’s adopted an us-against-the-world stance.

“We were the home team,” Russell said. “Everyone was gunning for us.”

With the Knicks essentially a .500 team, the city’s basketball focus shifted to St. John’s.

“There were billboards all over Manhattan,” said Tony “Red” Bruin, who went to Mater Christi High School in Queens and played at Syracuse. “You’d get into a taxi and the taxi drivers are talking about St. John’s and how they couldn’t be beaten.”

Still, Bruin and the Orange recognized the magnitude of the moment.

“We were in heaven,” Bruin said. “We felt like we finally arrived. All the sacrifice, all the practices over the holidays, it all paid off. The Big East came along at just the right time. The Northeast had a lot of great players. It was exactly what New York City basketball needed.”

On Wednesday at the Garden, Mullin, now the coach at St. John’s, and Ewing, the coach at Georgetown, kicked off the 2018 Big East Tournament with a first-round matchup. But this tournament looked very different from the ones they played. In 1983, the Big East was composed of St. John’s, Syracuse, Georgetown, Seton Hall, Boston College, Providence, Villanova, Pittsburgh and Connecticut. Many of those schools looked to New York City and Long Island to recruit players.

“Every game was a battle,” said Danny Dunne, who played at Long Island Lutheran and then Seton Hall. “You left your heart and soul out on that floor and after the game, we shook hands and said, ‘I’ll catch you down at the park.’ There was a mutual respect for each other. We all knew each other. We played against each other in high school, or the summer leagues or the park.”

Ron Stewart, who played at Brentwood High School and then St. John’s, said: “Not only were we dealing with school pride and team pride, but it was personal pride, too. Those same guys you were competing against, you were sure to see some of them during the summer and the topic of discussion was always who did what against who that past season.”

No team in the conference personified the local, working-class ethos more than St. John’s. The 13-man roster featured six players from Long Island, five from New York City and one each from New Jersey and Connecticut.

“I don’t think you will ever see that again,” Dunne said of the local talent. “St. John’s was a blue-collar team that people identified with. If you were a New Yorker, they were your team. The fathers and mothers who raised those players could have been anyone’s parents. They were a hard-working team and they worked really hard to keep what they had.”

More than the talent, and there was plenty of it on the St. John’s roster, the team was defined by its work ethic.

“Our practices were intense,” Russell said. “Our first five was great and we had five or six that could come off the bench and play, so it was good.

“No one wanted to lose their jobs. We worked on everything together, we practiced hard. We were all in. Our team was just so tight. We were trying to do big things. Everyone bought into it.”

Each player bought into their roles, as well.

“Guys like Trevor Jackson and George Garrison showed the reserve players the importance of their place in terms of preparing the starters for battle,” Stewart said. “That in turn would keep the reserves ready for battle when they were called upon.”

St. John’s opened the 1982-83 season in November with a 78-74 overtime win over North Carolina, the defending NCAA champions with a shooting guard they called “Mike” Jordan. Mullin, a sophomore, had 22 points and five steals. Jordan led all scorers with 25.

“He broke his hand a month before, so he basically played against us with a soft cast on his hand,” Russell said about Jordan. “He was the real thing, I had to guard him, so I know. He took off one time on me and I said, Oh my God. I knew he was going to be special when I saw him.”

St. John’s had little trouble during the regular season, beating Georgetown, Syracuse and Villanova — all ranked in the top 20 — in January. The players, 35 years later, still talk about the chemistry of that team.

“I was really fortunate to play with great veterans,” Mullin said. “I played with Bob Kelly, Kevin Williams, David Russell, Billy Goodwin and Trevor Jackson. All guys that were great players, experienced, had great work habits, great practice habits and really nurtured me along as a freshman and sophomore. I looked up to them. They were the leaders of the team and I just kind of followed them.”

“The best part was, that whole team and coaching staff were incredible people to be with,” Goodwin said. “I shared an apartment with Bill [Wennington] and spent most of my time with Chris. It was easy to see Chris would finish his career as the greatest Johnnie of all time, but people didn’t realize how good Bill was and how he was really the difference between us being good and us being great.”

While the 1985 St. John’s team is generally remembered more favorably because they reached the Final Four, Wennington credits the 1982-83 team with building the foundation for winning.

“There were a lot of seniors on that team, David Russell, Billy Goodwin, Trevor Jackson, guys who had been around for four years and who played hard together,” said Wennington, a sophomore on that team. “I was still an up-and-coming player trying to figure myself out. They taught us how important practices were and they taught us how to win. We understood that we had something special. Some of my fondest memories are of that team.”

St. John’s finished the regular season with a 24-4 record, with two of those losses against Boston College. Heading into the Big East Tournament, BC had the top seed, Villanova was No. 2 and St. John’s No. 3. Each session of the tournament — for four straight days — were sold out. Many of those in attendance chanted the familiar, “We . . . are . . . St. John’s.”

“We’d come to the Garden and it would be sold out, 20,000 people every time we played,” said Wennington, who won three NBA titles with the Bulls. “You couldn’t get tickets. You had friends, neighbors, relatives calling for tickets all the time. It was an exciting time to be part of basketball here in New York.”

In the opening game, St. John’s beat Pittsburgh, 64-53, and then came from behind to beat Villanova, 91-80, in the semifinals. They faced BC in the final. The Eagles’ press gave St. John’s problems during the regular season. Not this time, though. St. John’s shot 75 percent from the field in the first half, 68 percent for the game, and won, 85-77. “

“The tournament had just moved to the Garden, so it was a special time,” Mullin said. “College basketball was getting back into the Garden after being banished for years. To be able to win the first one as the home team meant a lot. It elevated our program. We basically had all local guys on our team so to play at the Garden was special for us.”

The spirit of that St. John’s team was embodied by Hall of Fame coach Lou Carnesecca.

“I watched Coach so much as a youngster, I went to his basketball camp, so playing for him was the ultimate,” Goodwin said. “I think the best part of Louie was he loved and protected us, I think that was why winning the tournament at Madison Square Garden was so important to us all. It was a reflection of him.”

Added Stewart: “We all were an extension of his work ethic, generosity, ferocity, intelligence and humility. Don’t get it twisted, St. John’s does not become one of the top programs in the nation without the presence of coach Carnesecca. Coach’s legacy will live on through everyone he coached in their personal and professional lives.”

5 things to watch as Red Bulls return from break vs. Nashville SC
Esiason's crusade for cystic fibrosis reaches happy milestone for son
DeGrom leaves Mets' victory over Cubs with right shoulder soreness
Sanchez turns tide with pinch-hit HR, lifting Yanks over Jays
Lennon: DeGrom's velocity is incredible, but it takes a toll again
DeGrom pulled with soreness after striking out eight of nine Cubs
Didn’t find what you were looking for?