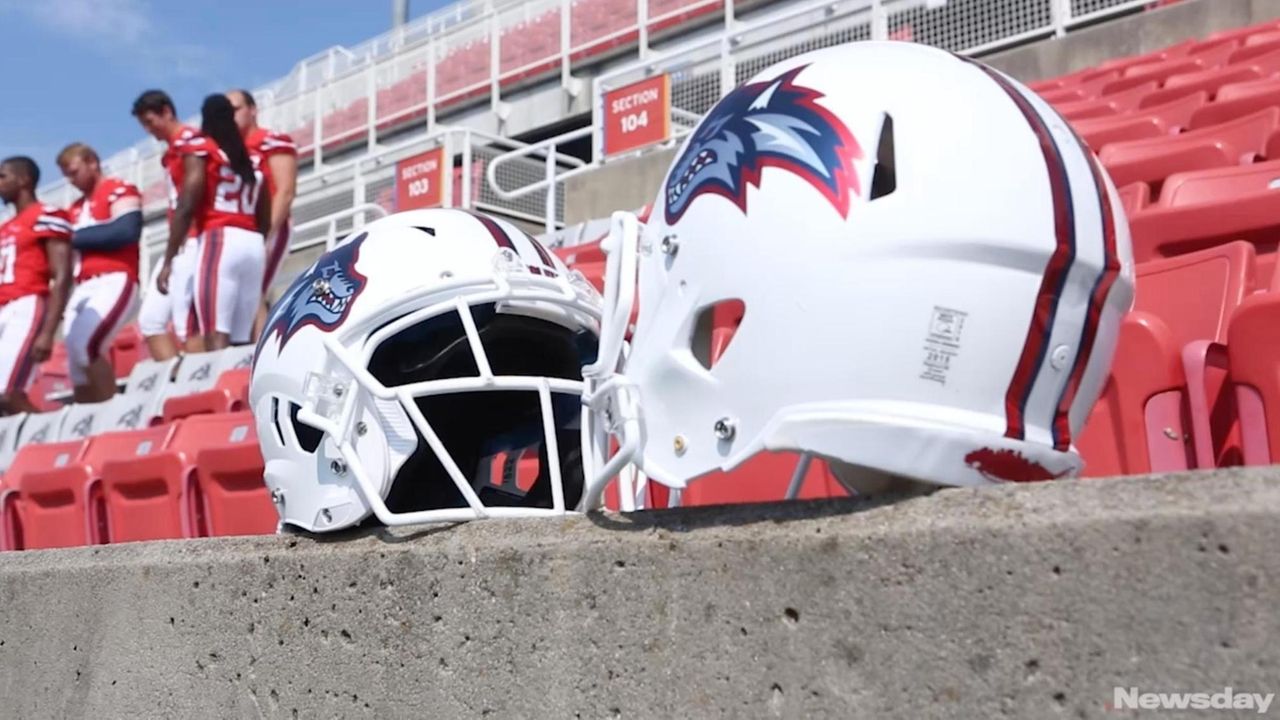 Running back Donald Liotine doesn’t like selfies. Fortunately for him, there’s nobody on the Stony Brook football team’s offense who simply worries about himself.

“When you have more guys at one position that you have to account for as a defense, it makes it that much more difficult to defend them,” said senior Jordan Gowins, who scored six touchdowns last fall and figures to share time in the backfield with Liotine. “It would be hard to just sit talent on the bench while you have one player playing. That just doesn’t make sense.”

The Seawolves, fresh off a 10-3 season that culminated with a loss to top-seeded James Madison in the second round of the FCS playoffs, took to the LaValle Stadium turf Friday in their red uniforms for team photos and media day.

Liotine, a senior, recorded 1,486 all-purpose yards last season for a team that averaged 29.2 points per game.

Depth is a key for Stony Brook, especially in the backfield. Making up for the loss of Stacey Bedell, who graduated, won’t be easy, but Liotine, Gowins and Buffalo transfer Kameron Pickett could be explosive as a group.

Said Gowins, “I was at Boston College [as a freshman] where we had a lot of depth, but I don’t think it’s even close to what we have now.”

Coach Chuck Priore acknowledged the team’s “positive depth” but said “reps will be appropriated based on performance [on] the practice field.”

Because the team uses a run-pass option scheme, quarterback Joe Carbone must be crafty under center. Having so many capable teammates to utilize certainly helps with his effectiveness.

“We’re trying to stick to what we do best and just execute at a high level,” Carbone said when asked how he can improve on last season’s performance. He completed 204 of 363 passes for 2,470 yards and 23 touchdowns.

Carbone said he’s particularly excited to see how Pickett plays with his new team, and he’s also fond of Marshall Ellick, a freshman receiver from Richmond, Virginia. Add in Tyrone Wheatley Jr., a tight end who transferred from Michigan this week, and receivers Donavin Washington and Cal Daniels, and the offense has plenty of playmakers.

“We do a good job of attacking in multiple ways and kind of mixing up what you think we’re coming with,” Liotine said.

Liotine attributed some of the offense’s success to practicing against Stony Brook’s defense, a unit featuring strong linebackers in Noah McGinty and Shayne Lawless and defensive back Gavin Heslop. They held opponents to 20.6 points per game last season.

“It’s almost frustrating in practice, but it makes Saturdays easier for us,” Liotine said.

Priore believes he has a “mentally tough” team, and Liotine described the end goal best.

“I think we drive off ourselves,” he said. “We want to be great. We want to win championships. Who doesn’t?”

Isles' COVID-19 outbreak could have long-term effect on team
Knicks shift focus to Nets after big win in Atlanta
Harden's identity crisis: Facilitator or scorer for Nets?
Brown back for Nets, but Nash going with Bembry against Suns
Burks starts for Knicks at point with Rose out, Kemba resting
Suns race out ahead and defeat Nets for 16th straight victory
Didn’t find what you were looking for?